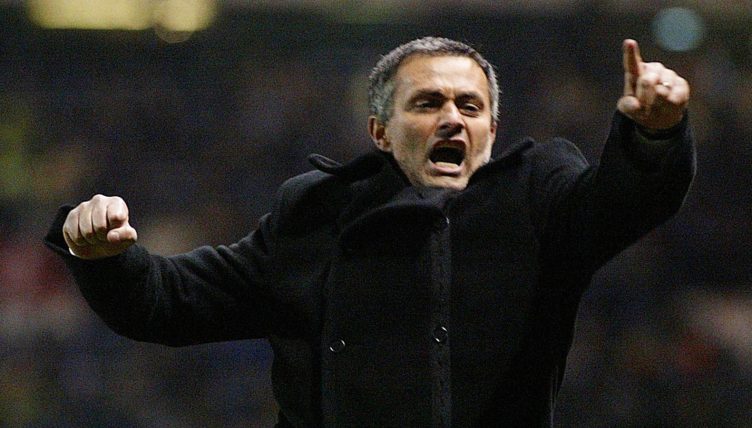 Jose Mourinho is football’s marmite man. But whether you love him or loathe him, you can’t deny that when it comes to being an absolute b*stard, he’s one of the best around.

Whether it be in a press conference, on the touchline or in a laundry basket, the Roma boss has ruffled feathers wherever he’s gone.

Here are nine occasions that earned him his reputation for rubbing people up the wrong way.

Sprinting into the spotlight at Old Trafford

Where to begin? Well, at the beginning, of course. In 2004, Mourinho was a 41-year-old yet to manage outside of Portugal. He had won a league title and UEFA Cup with Porto but was not yet known around the world. And then he showed up in Manchester.

His side had won the first leg of the Champions League knockout tie 2-1 but were on the verge of being knocked out on away goals after Paul Scholes gave United the lead at Old Trafford.

Then, in the 90th minute, Costinha slotted in a rebound to send his team through and his manager mental.

Mourinho quickly jumped from his seat to sprint down the touchline with his hands in the air, past Fergie and his staff, past the United fans and to his players. He would go on to lead Porto to Champions League glory, but this was the moment he arrived on the world stage.

Lying in the laundry

Mourinho’s eccentric antics continued in his first season at Chelsea. After losing the first leg of a tie against Barcelona 2-1, the Special One claimed he had seen opposition manager Frank Rijkaard enter the referee’s room at half-time. This turned out to be complete bullsh*t and Jose, who was branded an “enemy of football” for the incident, was given a stadium ban for the next two games.

The ban was in effect for the quarter-final against Bayern Munich, and it was believed that he was watching the first leg from a leisure centre near Stamford Bridge. Again, complete bullsh*t.

It has since emerged that Jose was snuck into the dressing room for the pre-match and half-time team talks in a laundry basket and was passing notes to his staff throughout the game via his goalkeeping coach. No, we’re not joking.

The 2010-11 season was not only arguably Mourinho’s best as a manager to date but also the provider of arguably his greatest moment too.

His Inter Milan team had beaten Barcelona 3-1 at San Siro in the Champions League semi-final first leg but had a huge task on their hands when Thiago Motta was sent off early at Camp Nou.

Mourinho produced a tactical masterclass to ensure his side only lost 1-0 and advanced to the final. At full-time, he respectfully shook the hand of arch-nemesis Pep Guardiola, hugged his players and returned to the dressing room. Nah, just kidding.

He sprinted straight on the pitch, grappling free of a rather angry Victor Valdez to celebrate with the few hundred Inter fans, not giving a f*ck about the 80,000 odd heartbroken Barcelona ones booing him or the sprinklers turned on to get rid of him. The Catalan club he’d once worked for now hated him – can you imagine if he was managing their arch-rivals?

Doing just that was as eventful as you’d expect. Most things in this list are, looking back, rather amusing, but not this one. This was just Mourinho being a sh*tty bloke.

A year into his reign as Real Madrid manager, Mourinho had struggled to bring down Guardiola’s Barcelona and was fed up of it, as the 2011 Super Cup showed. When a mass brawl broke out following a tackle from Marcelo on Cesc Fabregas, the Portuguese completely lost his head and gouged the eye of Barcelona assistant.

After the game, he simply shrugged when asked about and said he didn’t even know who “Pito” (Spanish for penis) Vilanova was.

By 2012, he had truly begun the transition from young, funny and exciting to bitter, disgruntled and world-weary. That’s what Real Madrid can do to you, we guess.

In a group stage game against Manchester City, his side were drawing 2-2 when Cristiano Ronaldo scored a last-minute winner. Instead of sprinting like he used to, this time Mourinho did a knee-slide onto the pitch to celebrate. That’s just a waste of a good suit, Jose.

After leaving Real Madrid with a rather sour taste in his mouth, Mourinho returned to his beloved Chelsea and the league he’d made his name in and quickly set out to make friends.

After Arsene Wenger claimed that opponents were playing down their own title chances as they were afraid to fail, Mourinho, out of nowhere, responded in a press conference by saying “You know, he is a specialist in failure. I am not.”

It’s fair to say the two men weren’t overly fond of each other.

Breaking Liverpool hearts. In a hoodie.

Have you ever showed up for a Sunday League match and seen a bloke on the other team in long trackies and old ripped-up boots? After assuming he’d be crap, did he then go and tear you and your team apart? This is effectively what Mourinho did at the end of 2014.

Liverpool, led by Steven Gerrard, looked set to win their first-ever Premier League title when they travelled to Stamford Bridge with four games remaining. Chelsea’s own title challenge looked to be over, and when Mourinho showed up on the touchline unshaven with messy hair and a dirty hoodie, many assumed he’d packed it in for the season.

Nah, he was just messing with you. Instead, he parked the bus, frustrating Liverpool until Gerrard slipped just before half-time to allow Demba Ba through to score.

The London club would score again at the death to effectively end Liverpool’s title hopes and Mourinho celebrated emphatically, walking down the touchline thumping his chest to his many fans.

By late 2018, Mourinho was extremely unpopular with many Manchester United fans for his dull style of football and the poor results that followed and was therefore rather grouchy, to say the least. When Ronaldo put Juventus 1-0 up in Turin, it looked like things were about to get worse for Jose.

However, two late goals gave his side a win, and Mourinho just couldn’t resist letting off some steam. At full-time he walked onto the pitch, looked up at the Juve fans in the stands and cupped his ears and smirked in the most pantomime villainy way possible.

No, he didn’t get drunk on the touchline, although we wouldn’t put it past him. Shortly after his antics in Turin, Mourinho’s Manchester United side were drawing 0-0 with Young Boys after playing pretty terribly. His days at Old Trafford seemed numbered.

Then, in the first minute of stoppage time, Marouane Fellaini scored a winner to send the crowd, and his boss, wild. Jose celebrated by picking up a crate of water bottles and slamming it to the ground. No clue why, but it was bloody brilliant.

READ NEXT: Ranking Jose Mourinho’s 11 signings for Man Utd from worst to best