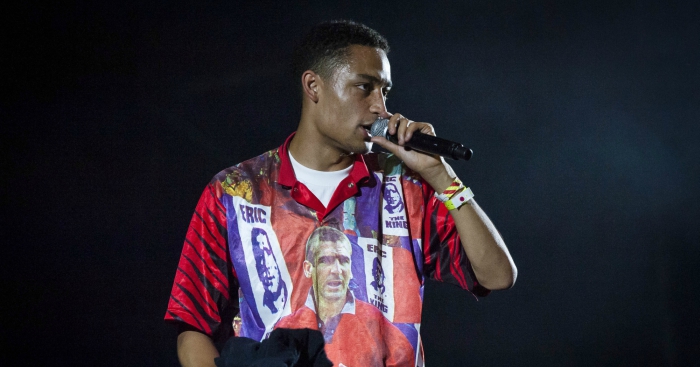 Football fanatic Loyle Carner continues to make waves in the music industry while looking good in retro shirts, including classics from Liverpool and Manchester United.

During that tour, he hit the news as he amassed an enviable retro football shirt collection – in exchange for gig tickets.

It all stemmed from this tweet from a man called Gregg Reid, with Loyle taking him up on his offer and trading a shirt for guestlist spots.

His obsession with football shirts has always been around, though. While artists tend to have large banners on stage behind them as they perform, Loyle instead chose to hang a giant shirt as his backdrop for the 2017 tour.

Met the man who started this whole footy shirt fiasco.

Mad love to @_greggreid for a brilliant idea and the Swedish 1990 home kit 🇸🇪 pic.twitter.com/SLXYBYDEFP

It would have been rude not to drop a retro kit into one of his videos, and there are none better than this England classic.

Just a casual tweet asking for people to play some pre-gig five-a-side, as you do.

And he was given that shirt alongside this beauty.

This looks like a God awful kit, but somehow he pulls it off. Had to be done when he popped north of the border.

He also wore it on the NME cover which deserves a shout.

We know, we know, it’s not retro technically. But it will be.

We couldn't move to South London without Loyle Carner.

The amazing @LoyleCarner plays Field Day 2018 – after a stand out performance on the @EatYourOwnEars stage last year. #fd2018
Tickets on sale at https://t.co/pHX0wnskcG pic.twitter.com/9i1yLneSRv

Yeah, he’s even got his own home and away kits.

A shirt regularly worn on his sold out UK tour last year was a custom dedication to Eric Cantona.

Then, the BBC’s Premier League show afforded Loyle the chance to meet his hero, and even get his hands on a personalised shirt.

Cantona, The King. Finally got to tell him the whole story.

And he was a bit overwhelmed by it all.

You can catch my chat with Cantona on the premier league show tonight at 10 on @BBCTwo.