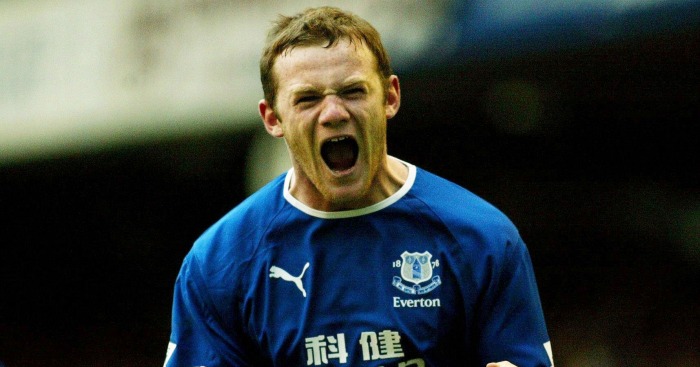 Wayne Rooney has completed his long-awaited return to Everton from Manchester United – but he will be joining a vastly different club to the one which he left.

After falling out of favour at United last season, Rooney has rejoined his boyhood club with the aim of winning back a place in Gareth Southgate’s England squad ahead of the 2018 World Cup.

The forward’s last competitive appearance for Everton came in a 5-1 defeat at Manchester City in the final game of the 2003-04 season, and we’ve looked back at the starting XI that day to see how it has evolved ahead of the 2017-18 campaign.

Rooney’s final appearance in an Everton shirt may not have been a happy day for Martyn, who conceded five goals, but the former England international was one of Everton’s most reliable goalkeepers of the Premier League era and played on for another two seasons before retiring in 2006 due to an ankle injury.

In the intervening years, Tim Howard made the No.1 shirt his own at Goodison Park, but last season was a difficult transitional period as neither Joel Robles nor Maarten Stekelenburg managed to fully convince between the posts.

Ronald Koeman has splashed the cash to sign Jordan Pickford from Sunderland in a deal which could rise to £30million, and the 23-year-old will be under pressure to live up to that price tag.

Few people deserve the status of ‘cult hero’ better than Hibbert. The right-back, who is among the top 10 players with the most Premier League minutes without scoring, will go down in folklore on Merseyside after 15 years in the Everton first team.

But Rooney will be playing alongside a much more dynamic right-back in Seamus Coleman – once the Republic of Ireland international has recovered from his horrific broken leg.

Coleman was often linked with a move to Manchester United after establishing himself as one of the best full-backs in the Premier League, and now he will finally have the chance to link up with Rooney.

One of Everton’s most experienced players during Rooney’s first spell at the club, Stubbs moved to Goodison Park after twice beating cancer while at Celtic.

The defender went on to captain Everton to their fourth-place finish in 2004-05 and returned to the club as a coach in 2008.

Like Pickford, Keane will also start the season with a hefty £30million price tag weighing over his head.

After failing to establish himself at Manchester United, Keane has developed into an England international at Burnley, and a strong season after making the step up to Everton could see him play his way into Gareth Southgate’s starting XI at the 2018 World Cup.

Alongside Stubbs, Weir formed a vastly-experienced partnership in central defence for the Toffees. The Scot was signed by Walter Smith in 1999 and went on to make 270 appearances before linking back up with Smith at Rangers in 2006.

Like Stubbs, Weir returned to Everton as a coach ahead of an equally ill-fated managerial spell.

Providing the bulk of the experience in Everton’s current defensive duo, Williams will be aiming to build on a steady if unspectacular debut season with the club.

“For me, he’s had a very decent season but some Blues fans watched his heroics at the Euros and expected we would be getting that week in, week out.”

Yobo was shoehorned in at left-back in the thrashing at Manchester City, but the Nigerian eventually became a mainstay at centre-back, partnering the likes of Stubbs, David Weir, Joleon Lescott and Phil Jagielka, before leaving for Fenerbahce following the signings of Sylvain Distin and Johnny Heitinga.

Baines, meanwhile, is Everton’s current second longest-serving player and has long been established as not only one of the Premier League’s best left-backs but the division’s coolest footballer and best mod.

They don’t hand out medals for that honour, but they really should.

This is where it gets a bit complicated due to the changes in formation. Watson lined up on the right of midfield against City but was equally adept at right-back.

As one of the older heads in Moyes’ side, Watson spent one more season on Merseyside before departing for West Brom.

There is an altogether more youthful feel about the Everton side Rooney will rejoin, and much of the buzz around the club’s young players is because of the performances of Davies last season.

When a local lad scores for his hometown club???

One constant in the Everton teams which Rooney left and will rejoin is the presence of a tough-tackling midfielder.

Carsley formed one-half of the Axis Of Bald in midfield with Thomas Gravesen for much of his Toffees career, making 199 appearances during his seven years at the club.

Gueye, meanwhile, proved one of the signings of the season last term after joining from relegated Aston Villa. The Senegal international has drawn comparisons with N’Golo Kante thanks to his all-action displays, and in fact he betters the Chelsea man’s stats in some categories.

Alongside Hibbert, Osman is one of the players from the Moyes’ era who you imagined would always be a member of Everton’s first-team squad, playing 20 minutes here and there in the League Cup when there have been a few injuries.

Alas, after over 400 appearances for the club, Osman did in fact retire in 2016.

Joining in a £24million move from Manchester United in January, Schneiderlin was one of the first major signings of the Farhad Moshiri era.

After a decent first six months at the club – Everton lost only two of 14 Premier League matches in which the Frenchman started – supporters will be expecting the midfielder to improve even further in 2017-18.

One of the big opinions in the Planet Football office in recent weeks, alongside Joe Cole being the Second Coming and Serie A kits ruling all others, is that McFadden was in fact a very good footballer.

In Bolasie, however, we’re happy to admit Everton have probably got a bit of an upgrade on the flank.

The winger cost £25million to sign from Crystal Palace and his debut season was ruined by a serious knee injury, but once he has fully recovered, the Toffees can look forward to deploying one of the most exciting, if unpredictable, players in the division.

Linking up with Rooney in attack at what was then known as the City of Manchester Stadium, Radzinski left in the very same summer after making some disparaging comments about the club’s ambition.

“We have lost a lot of players this season and yet we have only brought one in and I am afraid I don’t think Marcus Bent will be able to stop us from struggling again next season,” he said.

Radzinski left for Fulham, who finished 13th, while Everton went on to finish fourth.

While Everton have grabbed the headlines due to their signings this summer, one problem which needs to be solved is the future of Barkley – once seen as Rooney’s heir – who has yet to agree a new contract and is a target for Tottenham.

Should Barkley leave, Everton have already signed a replacement in former Ajax captain Klaassen, though Gylfi Sigurdsson could also arrive from Swansea.

The Rooney who left Everton for Manchester United – bloody hell he was good, exciting, young, good – did we mention how good he was? – was a very different player to the one who will return to Goodison Park.

The 31-year-old is certainly older and wiser, but he will have to rely on his intelligence rather than the flashes of inspiration which characterised his early career.

It still remains to be seen where he will quite fit in this Everton side. With Klaassen, Barkley and potentially Sigurdsson to battle for a No.10 spot, plus new signing Sandro Ramirez and quite possibly Olivier Giroud to compete with as a striker, Rooney faces a fight to make Koeman’s starting XI.

“He can be a 10 behind the striker, a nine, wide left or a seven,” Koeman said at Rooney’s unveiling on Monday. Can he just be bloody good again, please?

Kevin Campbell: ‘Arsenal were special, but I fell in love with Everton’

What Makes A Club: 21 photos to show the Everton matchday experience