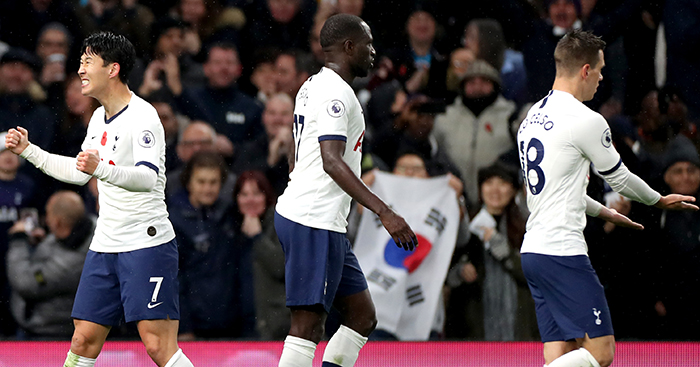 Tottenham couldn’t quite end their wait for silverware under Mauricio Pochettino, but they certainly improved as a team in the Argentine’s five years in charge.

The likes of Vlad Chiriches, Sandro and Paulinho started the final game of the pre-Pochettino era, but it did not take long for the former Southampton manager to stamp his mark.

We’ve looked at the first starting XI he picked for his first competitive game, a 1-0 win at West Ham in 2014, and compared it to the team that drew 1-1 with Sheffield United on November 9 in what proved to be his final game in charge.

Pochettino was lucky to be able to build a team on the foundations of one of the best goalkeepers in the world, with Lloris signed by Andre Villas-Boas a couple of years earlier.

However, Lloris clearly believes he benefited from the relationship just as much as his manager.

“Certainly, my destiny is linked to Mauricio. He matters a lot to me. Our relationship goes beyond football, it’s a match, and one day he will be the best manager in the world.”

Gazzaniga started Pochettino’s final game, with Lloris injured. He was a more than able deputy for his fellow countryman.

Naughton did not make the best of first impressions on Pochettino, getting sent off after just 29 minutes in the Argentine’s opening match, and he would go on to make just four further Premier League appearances for Spurs before being sold to Swansea.

But one of Pochettino’s biggest success stories has been the improvement in Spurs’ full-backs.

Kyle Walker was already an England international when the manager arrived, but he improved to such an extent that Manchester City paid £50million to sign him in 2017, at the time making him the world’s most expensive defender.

Kieran Trippier stepped into the breach and went on to shine for England at the World Cup before leaving for Atletico Madrid, but Aurier has been rather more hit and miss.

Having won the League Cup, helped the side qualify for the Champions League and scored a winner in a North London Derby at Arsenal, Kaboul will be remembered fondly among Tottenham supporters.

However, after starting Pochettino’s first season as club captain, Kaboul made only 11 league appearances and left for Sunderland in the following summer.

Toby Alderweireld and Jan Vertonghen would go on to enjoy huge success as Spurs’ first-choice centre-back pairing for several seasons, but neither started in Pochettino’s final game.

Sanchez started 22 games to Vertonghen’s 21 in the Premier League in 2018-19, but it was never going to be easy to improve on the Belgian – and though Sanchez is a good player, so it has proved.

Dier arrived at Tottenham as an intriguing case. An English player reared at Sporting Lisbon, he became one of Pochettino’s most trusted performers after scoring a 93rd-minute winner at West Ham on his debut.

Pochettino used him mainly as a holding midfielder, a role in which he would go on to establish himself for England, but Dier was used much more sparingly in 2018-19 as Harry Winks emerged.

He was back in central defence against Sheffield United, though, in a much-changed back five from the one on which Spurs’ success under Pochettino had been built around.

“The manager came in and spoke with me, I was one of the first people he spoke to,” Rose told Tottenham’s official website in 2016. “He said if I entered into his philosophy, he would make me into an England player, so he’s been true to his word.”

Rose was not a particularly popular player at White Hart Lane prior to Pochettino’s arrival, but he benefitted more than most from the Argentine’s coaching and was named in the PFA Team of the Year for two years in a row in 2016 and 2017.

Known as “the gaffer’s son” among the Spurs squad, Rose said of Pochettino: “He’s been like a father figure to myself and a lot of the players here.”

He has had to share left-back duties with Ben Davies since suffering a knee injury in 2017 though – both started 20 games in the Premier League in 2018-19 – and it was the less adventurous Davies who got the nod for Pochettino’s finale.

Bentaleb was one of the success stories of Pochettino’s first season, impressing enough in midfield to earn a new five-year contract. But the following season brought suggestions of a fall-out with the manager and only five league appearances.

Dier took on the role admirably, with Victor Wanyama and Winks later adding to the competition, but Spurs started without an out-and-out holding midfielder against Sheffield United.

Sissoko’s transformation from joke figure to key player under Pochettino is a fine example of the Argentine’s coaching ability, but the make-up of his final team is an equally fine example of perhaps where things went wrong at the end.

Capoue joined Tottenham with a promising reputation, but he never truly established himself at White Hart Lane, making 12 league appearances in both of his campaigns with the club, though he has since gone on to impress at Watford.

Mousa Dembele was a revelation under Pochettino in midfield, while the aforementioned Sissoko also impressed in time, but the jury remains out on Ndombele, who Pochettino suggested could take two years to find his best form in England.

Lamela had endured a disappointing first season at White Hart Lane when Pochettino took over, but he has improved to the extent that in 2018 he signed a new four-year contract.

Injuries have held him back at times, but he remained an important player for Pochettino until the end. But not as important as Alli.

David Pleat takes the credit for spotting the midfielder playing for MK Dons, and Pochettino also deserves credit for giving the youngster an opportunity so early, but the man most deserving of praise is Alli himself having grabbed that opportunity with both hands.

However, plenty believe that rather than kick on as would have been expected, Alli has in fact regressed from that young player who excited so many.

Tottenham knew they had a potential star on their hands when they signed Eriksen from Ajax in 2013, but it did take some coaxing out of the Denmark international.

Fortunately, the demanding style of Pochettino has suited the attacking midfielder, who has improved season upon season, culminating in him being named in the PFA Team of the Year for the first time in 2018.

But Eriksen wanted to leave Spurs after the end of the 2018-19 season and had an uncomfortable half-season before leaving for Inter in January 2020. It’s still too early to properly judge Lo Celso, but he’s looking like a real find.

Lennon was a loyal servant to Tottenham, making 364 appearances in all competitions for the club and being involved in the run to the Champions League quarter-finals, but by the time Pochettino arrived his career was starting to stagnate, and come January 2015 he was on his way to Everton.

Son, meanwhile, will go down as one of Pochettino’s very best signings. The South Korean scored 21, 18 and 20 goals in three seasons for Spurs after a hit-and-miss first year, and he maintained his form until the very end of the manager’s reign, scoring his eighth goal in his 15th game of the 2019-20 campaign to earn his side a point.

It seems strange looking back to think that Adebayor, and not Kane, started Pochettino’s first competitive match in charge, but the Togo striker had enjoyed a mini resurgence under Tim Sherwood in the previous season – who can forget *that* salute?

But by November, Pochettino could not ignore Kane’s form in the cup competitions any longer and handed the striker his first league start of the season. It’s fair to say he hasn’t looked back since, with Kane becoming the poster boy for Pochettino’s Tottenham.

He has already scored 143 Premier League goals, 46 more goals than Adebayor managed in his career.