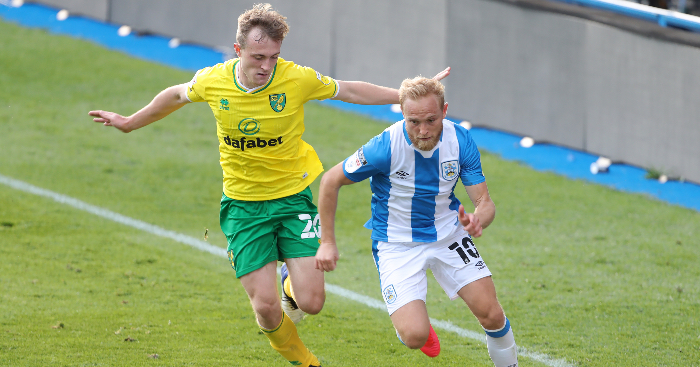 Adam Idah netted an 80th-minute winner as Norwich City defeated Huddersfield Town 1-0 in their opening fixture of the 2020-21 Championship campaign, but a man-of-the-match performance made Oliver Skipp the name on the lips of Norwich and Tottenham fans.

Skipp, who joined the Canaries on a season-long loan from Spurs to gain more first-team experience, was making his debut at the John Smith’s Stadium on Saturday.

Playing the full 90 minutes, the England Under-21 international registered a passing accuracy of 93% in the opposition’s half, recovered the ball six times and won 14 duels at a success rate of 64.3%.

The midfielder completed 28 of his 32 attempted pass (a success rate of 87.5%) and also won six fouls, more than any other player on his side.

Skipp has been considered a promising prospect at Tottenham for a number of years and made 23 appearances in all competitions over the last two season.

If he can maintain such form for the Championship outfit, 2020-21 could prove a huge season in his development as a player, and supporters of both Tottenham and Norwich took to Twitter to praise the 19-year-old.

Alasdair Gold, football.london’s Tottenham correspondent, went as far as dubbing Skipp a “future captain”, while one Canaries supporter suggests he will guide them back to the Premier League.

there’s no way Oliver Skipp won’t be recalled by Tottenham until the end of the season. Phenomenal player. #NCFC

Oliver skipp is actually taking us back to the prem #FreeOliverSkipp

Oliver Skipp was the best player on the pitch today imo, what a signing he’s going to be! #ncfc

Oliver Skipp is incredible. We've been crying out for somebody like him. 😭