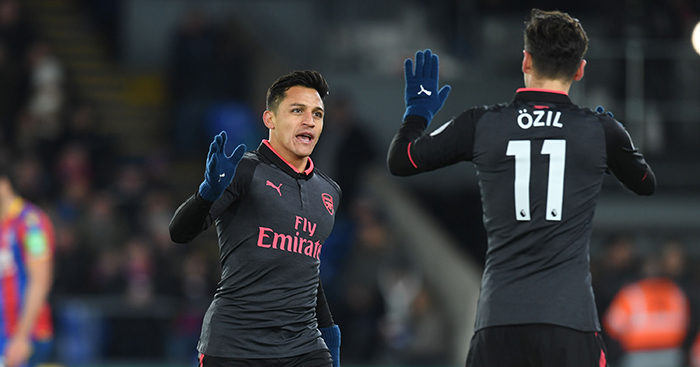 Arsenal look likely to lose both Mesut Özil and Alexis Sanchez either in January or the summer, but which player would they miss most – and how do their rumoured replacements compare?

The January transfer window provides teams with the opportunity to make final improvements to their squad to help achieve their targets for the season.

Liverpool have already done so, signing Virgil van Dijk to bolster their defence, but it is not out of the question that Arsenal could actually lose one of their star players this month, with both Özil and Sanchez attractive targets for other clubs.

The duo each have only six months left on their contract, so the Gunners may be tempted to cash in should they receive a decent-sized bid to avoid losing their prime assets for free in the summer.

There’s no doubt that Özil and Sanchez are two of Arsenal’s best attacking options, but which one would be a greater miss should they leave the Emirates? 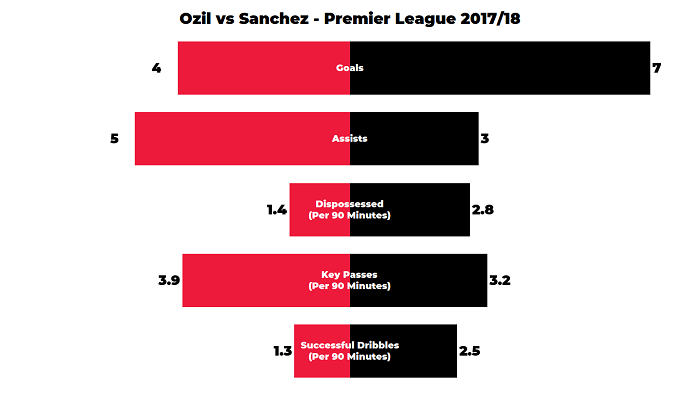 Sanchez offers more of a goal threat, scoring seven so far this campaign, whereas Özil has provided more assists and a slightly higher key pass ratio.

Sanchez has completed more successful dribbles than the German, but he has also lost the ball far more, highlighting his willingness to try to do it all on his own on some occasions. Only seven players have been dispossessed more in the Premier League this season.

Both have shown they can be match winners, however. Sanchez scored a stoppage time penalty against Burnley back in November and more recently scored twice at Selhurst Park against Crystal Palace in a 3-2 win, while Özil secured three points for the Gunners with a brilliant volleyed winner against Newcastle in mid-December.

From the statistics, it is clear that Özil is more of the creator and orchestrator of the Arsenal team. This was shown in the recent draw against West Brom, where Arsenal’s attack looked blunt without the injured playmaker. In comparison, Sanchez is more of a finisher, who takes it upon himself to score goals and provide the moment of brilliance out of nothing.

In reality, both will be missed should they leave and it appears to be a question of when, not if, it will happen. But who should Arsenal aim to replace them with?

Three names that have been repeatedly linked with the club are Wilfried Zaha, Riyad Mahrez and Thomas Lemar. 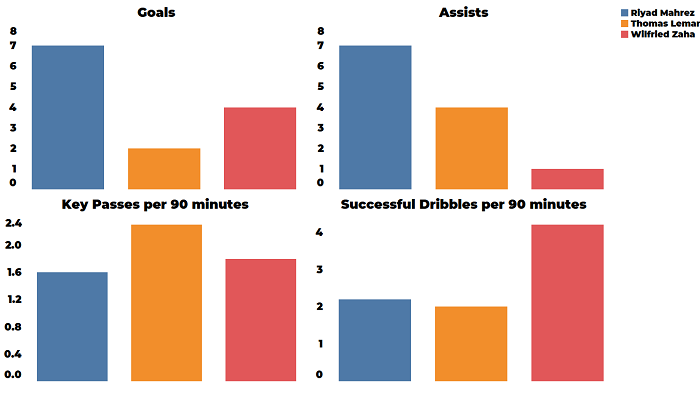 Comparing the trio, it’s clear to see they would all offer something different:

Riyad Mahrez has contributed seven goals and seven assists to Leicester so far this campaign, so could help to replace the goals. His 14-goal contribution means he’s been directly involved in over 41% of the Foxes goals in the Premier League.

After a disappointing 2015-16 season, it looks like the Algerian has found his form from the title-winning campaign. However, with a contract that runs until 2020, it will take a big offer to persuade Leicester to sell midway through the season.

Thomas Lemar has completed the most key passes of the three, recording 2.3 per 90 minutes. At just 22 years of age, he clearly has a lot of promise, and his ability to play on either side or just behind the striker would be an added bonus.

Wilfried Zaha is the most direct of the trio, completing 4.2 successful dribbles per game. Zaha’s 63 successful dribbles in the Premier League so far this season is only bettered by Eden Hazard’s 76. With Crystal Palace involved in a relegation battle it would seem unlikely they would sell their best player in January, but a big offer could be persuasive.

Looking at the potential replacements, it appears that it may be easier to replace Sanchez’s goals than Özil’s creativity. For all of his critics, no player is producing more key passes than the German in the league. In fact, only two players in Europe’s major leagues are managing it – Dimitri Payet and Neymar.

What is certain is that whether one or both leave in January or the summer, Arsenal need to make sure they bring in quality replacements. Some key decisions lie ahead.

Where are they now: Arsenal’s League Cup youngsters since 2007