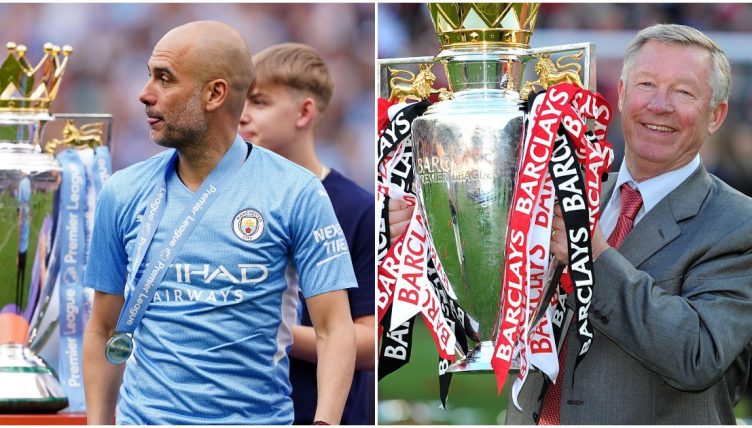 Pep Guardiola and Alex Ferguson have been compared at length ever since the Spanish manager burst onto the scene with Barcelona. Now he has led Manchester City to another Premier League title, how do their trophy cabinets at the two Manchester clubs compare?

Ferguson is largely accepted as the greatest manager of all time and his success with United returned the Old Trafford club to the top of the English and European game.

Guardiola, however, became a top-flight manager in 2008 and is still going. The Spaniard joined City in 2016 and has now been at the club for six seasons. In that time he’s given the club unprecedented levels of domestic dominance, with only Ferguson’s achievements comparable.

“When I arrived, the people here said the Premier League is so difficult, it is the toughest one,” Guardiola said ahead of City’s latest title victory.

“Different teams would win, only Sir Alex Ferguson with United was able to take a lot of championships. When it happened you realised the magnitude of their achievement but now we are close to doing it, being part of that and we have to try to take it.

“A lot of work went on the first season when we didn’t win. Of course, it is great to be in the position we are in now.”

Guardiola went on to say that the tenacity required to consistently win comes from the level of competition in the Premier League.

“If we have had this energy this season, why should we not have it next season. The competition makes this energy,” he said.

“If the new season was starting tomorrow I’d say, “Oh no, please, give me a break”. But the moment we start pre-season, new players and a first opponent, I’m sure the energy will be there again for us to try and be a good competitor.”

Guardiola’s success domestically has been impressive and City won a clean sweep of all domestic trophies in 2019, becoming the only English team to ever do so.

But he has not yet been able to ‘three-peat’ the title by winning three back to back as Ferguson did on three separate occasions. He’s also struggled with City at a European level despite his success in the Champions League with Barcelona.

We’ve taken a look at how Guardiola’s trophy cabinet at City compares to Ferguson’s at United. Admittedly, Guardiola is nowhere near Ferguson’s total of 27 years in Manchester so we’ve also looked at their trophies per season record.

"The players are absolutely eternal in this club, because what we achieved it's so difficult to do it."