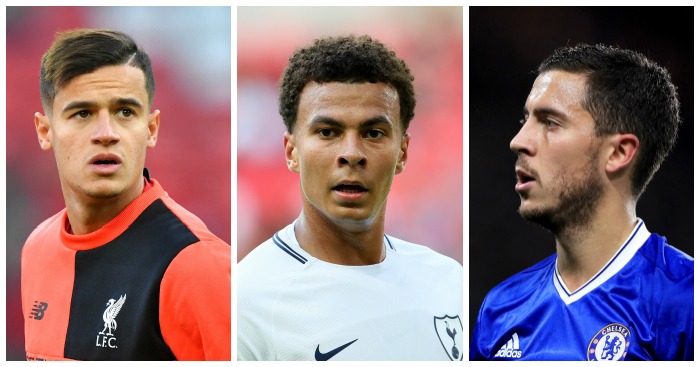 Barcelona have at various points been linked with three Premier League stars in Philippe Coutinho, Eden Hazard and Dele Alli, but what is it that convinced them to make the Liverpool midfielder their top target?

Barça banked £198million from the sale of Neymar to Paris Saint-Germain earlier this month, but replacing one third of their brilliant MSN frontline is certainly not their only problem judging by the way they were outclassed by Real Madrid across the two legs of the Spanish Super Cup, which they lost 5-1 on aggregate.

The Catalans hope to sign Ousmane Dembele from Borussia Dortmund and Coutinho from Liverpool, but the Reds continue to insist in public the Brazilian will not be sold this summer and apparently didn’t even reply to a final take-it-or-leave-it offer.

Hazard and Alli have both been mentioned as possible alternatives should Liverpool stand firm, but how do the three players compare?

Alli outscored Coutinho and Hazard with 17 goals from open play in the Premier League last season, though it’s only fair to point out he was almost always used in a central position, unlike the other two.

The total goalscoring difference among the three is not significant anyway, but what is different is the variety of how the three players score their goals.

All display very different distributions in their array of goals, from the highly right-footed Coutinho to the almost evenly distributed scoring of Alli’s eight goals from the right side and 5-4 split with his left boot and headers.

The sample size is too small to draw any hard conclusions, but Alli, the tallest of the three, was the only one to score with a header last season. 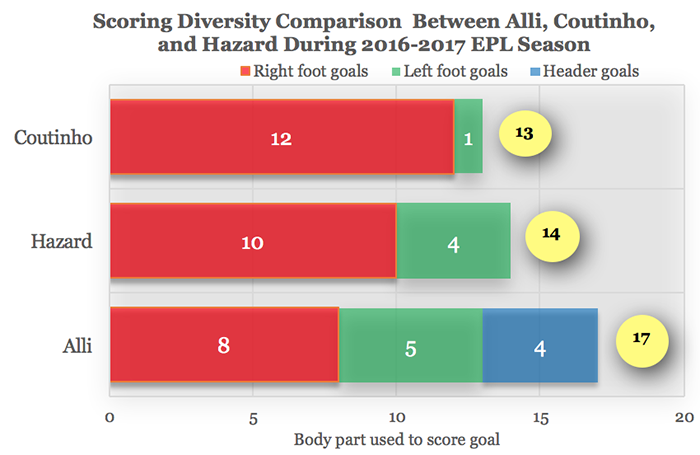 Goalscoring based on xG

The expected goals (xG) data collected by Opta and used by clubs is not widely available to the public, but it is possible to use a simplified version of this hugely popular form of analysis based on shot location, the x-y coordinates on the pitch, and the likelihood of those shots being made.

Using eight years of WhoScored data, you can see that almost a third of all shots taken inside the six-yard box result in goals, while only 3.35% of shots from outside of the area find the back of the net.

As you would expect from three of the most highly-rated players in the Premier League, Alli, Hazard, and Coutinho all boasted goalscoring efficiency well above the average (100%) last season.

Coutinho’s figures for shots taken from outside of the box are particularly impressive, with over double the average success rate from that distance, while Alli is by far the most clinical of the three from close range.

All three of them massively exceeded average expectations with shots inside the penalty area, with Hazard the most impressive finisher overall according to the data having scored over 2.3 times the number of goals the average player would have scored from his selection of shots. 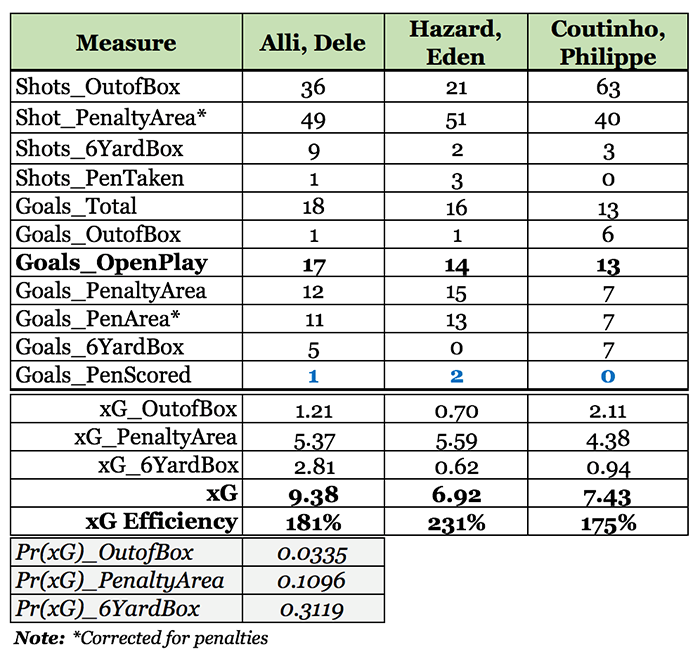 All three of these players like to take on defenders. No feint hearts here. But Eden Hazard is simply a terror. Not only does he dribble more frequently than Alli and Coutinho, he does it with a higher success rate.

The results are not close. Hazard’s dribbling skills are so significantly superior to Coutinho with 143 successful dribbles to 70, respectively, that the odds this difference could be attributed to chance or be accidental is 175-1.

Alli fares even worse and is clearly bringing up the rear in this comparison, with only 51 of his 130 dribbles proving successful. 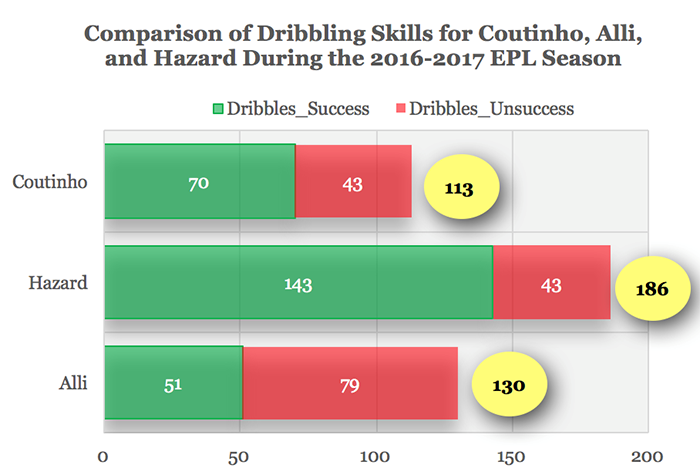 In terms of both total chances created and time needed to create chances, Alli falls dramatically short of the other two midfielders.

Even though Coutinho lost considerable match time to injury last season, his performance in creating goalscoring opportunities when on the pitch puts him on even footing with Hazard. 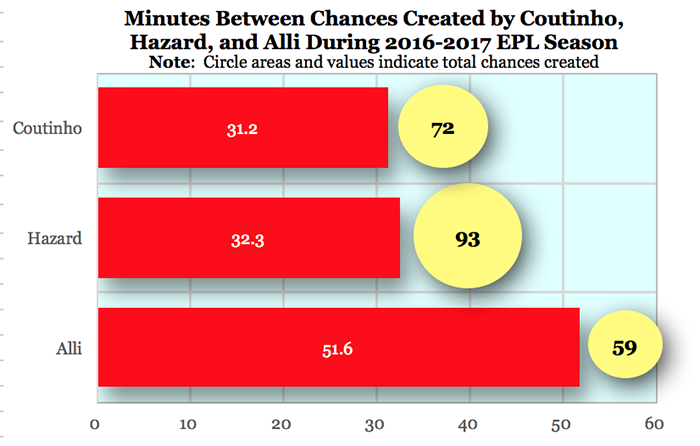 The difference between the amount of chances created by Hazard and Coutinho is not significant, but the odds that Coutinho’s superiority over Alli in this regard is down to chance is 301/1. Clearly, creating chances is not Alli’s strong suit at the moment.

Although the three players’ passing accuracy appears close, the size of the sample is very large, meaning both Hazard (84.3%) and Coutinho (83.8%) are significantly superior to Alli (80.6%) in this regard.

The odds of the difference between Hazard and Alli’s figures being down to chance are 111-1.

As if to stress the point, Alli attempted the smallest percentage of forward passes (generally the riskiest/most vulnerable to interception or failure) of the trio last season. By contrast, almost two-thirds of all of Coutinho’s passes (65.1%) were played forwards.

Every Barcelona player is focused on possession, but of equal importance is the ability to rapidly win it back.

The six-second rule instilled by La Masia uses a zonal arrangement of players such that when Barça lose the ball, there are typically three players within a very small space – a recovering triad – to attack and regain possession within a few seconds.

Six seconds represents the time that the defender is most vulnerable and unsure of what to do with his new possession and least capable of maintaining control.

An examination of a few of these defensive metrics include aerial and tackling performance, take ons (really overlapping with attacking skills), interceptions, clearances, and fouls. 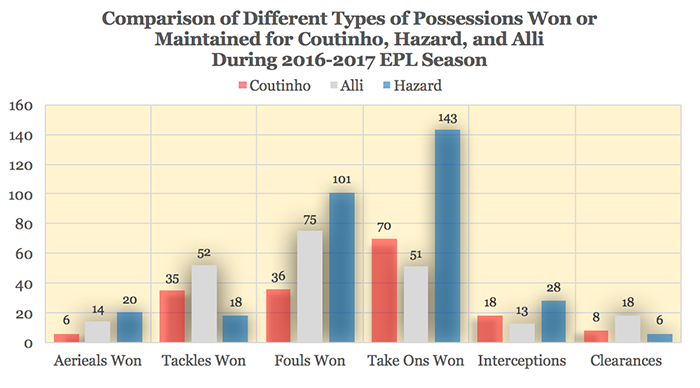 Alli has the physical attributes and has displayed a built-in edge to his game arguably beyond both that of Hazard and Coutinho, but the one metric aside from take-ons won that really stands out is the ability to win or retain possession by drawing fouls.

In this category, Eden Hazard is a wizard. Both he (19) and Coutinho (18) rarely gave away fouls last season in comparison to Alli (50), but the Chelsea man far exceeds either of his contemporaries in terms of the amount of free-kicks he won.

The latest valuation of these players by the Weekly Post of the CIES Football Observatory has these assessments: Dele Alli (€155.1m), Eden Hazard (€117.2m), and Philippe Coutinho (€70.8m).

As these statistics show, all three players are truly exceptional. Barcelona appear to have identified their man, but will they get him?