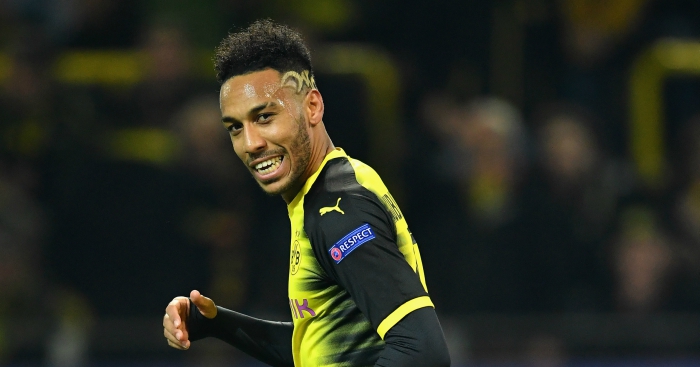 Pierre-Emerick Aubameyang’s move from Borussia Dortmund to Arsenal appears to be edging closer – but how do his stats compare to the Gunners’ existing strikers?

Aubameyang looks likely to join Arsenal for a club-record fee before Wednesday’s transfer deadline, a move which would allow Olivier Giroud to leave Emirates Stadium, possibly to Dortmund as part of the deal or perhaps to Chelsea as their search for a target man goes on.

Ahead of the anticipated transfer, we’ve compared Aubameyang’s stats in the Bundesliga this season to Giroud, Alexandre Lacazette and Danny Welbeck’s Premier League numbers.

Aubameyang has grabbed 13 league goals this season – more than any Arsenal player – from 16 appearances, averaging 0.8 per 90 minutes of action.

His three assists means he has been directly involved in a goal every time he has taken to the field this season.

Aubameyang is one of the best strikers out there, to get him for £56m when teams are spending over £60/70m on defenders, we will have got an absolute bargain

Arsenal’s top scorer Lacazette has nine goals to his name from his debut season in English football so far, but 24 appearances mean he averages just 0.5 goals per 90 minutes played – while he has also contributed three assists.

Welbeck has netted three times this season, averaging 0.4 goals per 90 minutes of action and also adding one assist along the way.

However, it is Giroud who boasts the best scoring record, despite having started just once this term.

His four Premier League goals mean he averages one for every 90 minutes he spends on the field, though he is yet to contribute an assist.

Said it before, will say it again – Letting Giroud go to Chelsea makes no sense. Even if Aubameyang comes in. Would be a totally baffling decision. Loyalty to the player shouldn’t come into it.

When it comes to taking shots on goal, Aubameyang has averaged 3.8 attempts per 90 minutes of action in the Bundesliga, hitting the target 46.6% of the time.

Welbeck has averaged 2.2 shots per 90 minutes from his 16 Premier League appearances so far this season, with 41.1% of those being on target.

£55m for Aubameyang, in a market where Manchester United paid £75m for someone like Romelu Lukaku, is outstanding business. Not to mention that he is an exceptional player who will thrive off of the link-up play with Mesut Özil. Credit where due. Only slightly jealous….

When it comes to passing, Aubameyang attempts an average of 20.1 passes per 90 minutes, with 76.3% accuracy.

He also averages 1.0 key passes per 90 minutes, claiming his three assists in the process.

Welbeck boasts the highest passing accuracy with 81.0%, while he plays 1.2 key passes per 90 minutes in the Premier League.

While Lacazette’s passing accuracy is lower at 74.8%, he too creates 1.2 chances for team-mates per 90 minutes.

Giroud, on the other hand, has a much lower passing accuracy of 66.5%, but he plays an average of 1.7 key passes per 90 minutes of Premier League action.

Aubameyang and Mkhitaryan reuniting at Arsenal has the potential to be something special. If they click with Özil too, that’s a scary front three

Attempting 26 dribbles in the Bundesliga this season, Aubameyang has a success rate of just 19.2%. He is also dispossessed 0.8 times per 90 minutes, and takes 1.7 unsuccessful touches on average.

Lacazette has a significantly higher dribble success rate of 69.4%, however he is dispossessed 1.9 times and takes 2.5 unsuccessful touches per 90 minutes in the Premier League.

Welbeck is dispossessed on average 2.2 times per 90 minutes, and takes 1.8 unsuccessful touches on average, while he has a 60% dribble success rate.

100% is Giroud’s score in that category, having completed his one attempted dribble so far this season. He is dispossessed on average 1.2 times per 90 minutes but takes 3.2 unsuccessful touches.

Aubameyang is easily in the top 5 in terms of out and out strikers in the world. In today’s market if Arsenal sign him for £60m considering Everton bought Sigurdsson for £50m and Liverpool VVD for £75m then it’s the deal of the decade

Defending from the front, Aubameyang makes just 0.3 successful tackles per 90 minutes of league action, and 0.2 interceptions.

Lacazette makes a much higher 1.1 successful tackles per 90 minutes in the Premier League, averaging 0.3 interceptions.