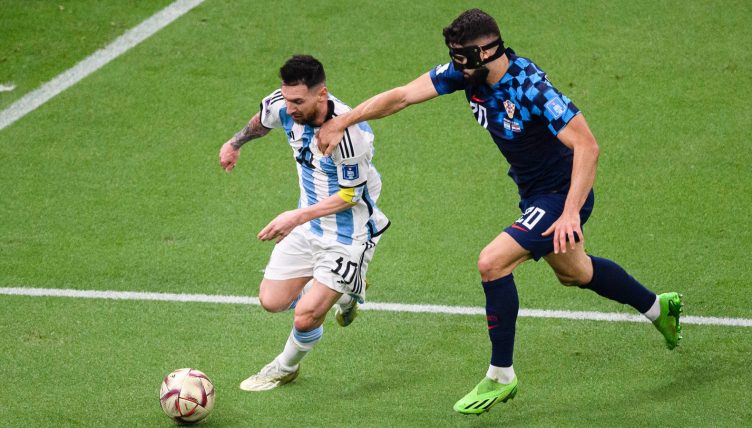 Lionel Messi is arguably the greatest player of all time so it’s not surprising he’s left many of his decorated peers wiping metaphorical custard pies off their faces during their careers.

Messi has bewitched supporters and opponents alike for Barcelona, PSG and Argentina since 2004 and he’s so talented that there’s almost no shame in being beaten by the pint-sized maestro. Almost.

We’ve compiled an XI of superb footballers that Messi has turned into quivering wrecks throughout his sensational career.

Bayern Munich goalkeeper Neuer was buoyant before the Champions League semi-final against Barcelona in 2015; he’d won the World Cup nine months previously, beating Messi’s Argentina in the final, and was lauded as the best of his generation.

Messi sat him on his arse.

Manuel Neuer: "It's crucial to show authority when we meet on the pitch and show him who's boss. I did the same in the World Cup final and this worked out pretty well.”

Sit back, pick your favourite snack and watch 245 seconds of Messi leaving Ramos contemplating a career in landscape gardening or amateur butchery.

Imagine, for one second, being Gvardiol; you’re a 20-year-old that’s arguably been the best defender at the 2022 World Cup, with all of Europe’s top clubs fighting to sign you for an astronomical fee.

You’d feel pretty happy with your lot, wouldn’t you? At least until Messi ragdolls you in the semi-final, ensuring your place in the tournament montage for all the wrong reasons.

by far the best video i’ve ever taken #messi pic.twitter.com/vJglh088Dr

April 2015 saw the end of Boateng’s reputation as one of Europe’s top defenders. We hope Messi paid for the surgery for the German’s shattered ankles.

Upon receiving the ball, and spotting Carlos zooming into his personal space, Messi slowed the game down to a pause and laid the trap for his gilded opponent.

Carlos took the bait. As the World Cup winner contemplated pinching the ball, Messi left him stumbling backwards like a disorientated drunk as he motored past. Magnificant.

We all know why Roberto Carlos doesn't like Messi😉 pic.twitter.com/pDv0V1HAmd

Scholes was often more appreciated by his European peers than English supporters but he was firmly put in his place by a long-haired Messi back in 2008.

Despite the fact Manchester United beat Barcelona on this occasion, with Scholes scoring the winner, Messi gave a glimpse of his glittering future by leaving the United midfielder for dead and reaching for his inhaler with his rapid footwork.

That moment Messi made Scholes look like an amateur 😲

Barcelona’s 2014-15 side is often overlooked when debating their greatest-ever sides but a forward line of Messi, Neymar and Luis Suarez swept all before them in Spain and Europe.

Take this Champions League beating of Manchester City for example. Although Messi didn’t even score a single goal in the fixture, his performances were phenomenal.

In the 26th minute of the first leg, Messi nutmegged David Silva when he approached to make a tackle. Silva certainly didn’t try that again.

Messi did this to David Silva😂 pic.twitter.com/N2wENeVYzR

We could have selected any one of Real Madrid’s golden midfield trio from the 2010s but there was a wonderful juxtaposition between Messi’s Latin flair and Kroos puffing and puce from the heat behind him.

Of course, we’re doing a multiple Champions League winner a huge injustice in our description of him. But Messi often reduced world-class operators to Sunday League plodders.

Robben was a sensational winger during his peak for Bayern Munich but a young Messi sent him on the first boat back to the Netherlands during a Champions League tie in 2006.

A curiously not-bald Robben attempted to dispossess the teenage wonder only to be left choking on dust as Messi avoided his sliding tackle and sped away.

When a young Lionel Messi sent Chelsea's Arjen Robben back to Holland. pic.twitter.com/85TvYWTaTA

Apart from all the Ballon d’Or’s Messi won at the expense of Ronaldo, which definitely keeps him up at night, he also left us with the wonderful image of Cristiano munching on worms after one failed sliding tackle.

Pep Guardiola’s Barcelona were at their maddening best in this particular fixture against Real Madrid, denying their arch-enemy the ball and the chance to retain some dignity.

And, as Messi was put through on goal, Ronaldo committed to a desperate lunge to dispossess his great rival. He failed.

Barcelona’s dismantling of Manchester United in the 2011 Champions League final is regarded by many as one of the finest club performances of all-time.

And Messi, who scored and won Man of the Match for his performance, sent Nani for an over-priced Wembley hot dog without even touching the ball.

It remains one of life’s great mysteries that Albus Dumbledore chose Harry Potter, and not Messi, to be the greatest wizard of the age.

This is just art – Messi off balances Nani without touching the ball pic.twitter.com/7Ko4xLxKxh

READ MORE: Where are they now? The Barcelona B XI from Messi’s last game in 2005