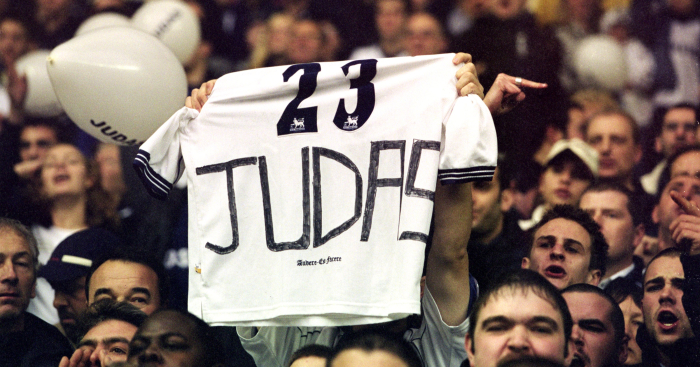 Arsenal, Liverpool and Manchester United have all been involved in controversial transfers which have seen players join fierce rivals.

Few things anger supporters like a fan favourite turning their back on the club to join a local rival.

A now infamous move, in 2001 then 26-year-old Campbell moved directly from Tottenham to Arsenal.

After months of haggling with Spurs’ hierarchy, the defender decided that he wanted to play Champions League football and so left White Hart Lane to move to the Gunners on a free transfer.

In 2014, Campbell told Sky Sports News: “I’m sorry about the situation with me going and I’m sorry how it happened.

“I’m not going to apologise for the move (to Arsenal) because I was very successful. I’m sorry about the hurt it inflicted on them.”

We’re not sure Spurs fans are going to accept that apology.

The noisy neighbours were just starting to crank up the volume in 2009 – and purchasing Tevez was a clear signal of intent.

The striker was applauded off the field by Manchester United supporters in what turned out to be his final game for the club, but he then departed in acrimonious circumstances to join Roberto Mancini’s Manchester City.

We must admit, that ‘Welcome to Manchester’ sign which followed was a wonderful bit of banter.

Fabregas left England an Arsenal hero, but he returned somewhat a villain to Gunners fans – at least at the time.

The Spaniard joined Arsenal’s academy in 2003 and rose through the ranks to become club captain in 2008.

After lengthy speculation, the Catalan returned to Barcelona in 2011 in a deal worth £25million.

He spent three years at the Nou Camp, winning La Liga and the Copa del Rey before signing for Arsenal’s London rivals Chelsea in a £28million transfer.

“If I had moved to Manchester United they would say, ‘He’s gone to a club that have been our big rivals for such a long time.’ If it had been Manchester City they would have complained, too,” Fabregas later told the Sun.

“Any team I would have gone to, apart from Arsenal, it would have been bad to them.”

The phone call made by Leeds United managing director Bill Fotherby to Manchester United chairman Martin Edwards to inquire about the availability of Denis Irwin has gone down in the folklore of both clubs.

Fotherby was given short shrift with regards to Irwin, but Edwards – with Manchester United struggling for goals – then took the chance to express his own interest in signing one of Leeds’ strikers.

Lee Chapman was the first target, but with Alex Ferguson sat by his side, Edwards quickly turned his attentions to the mercurial Cantona, who had just so happened to have fallen out with Whites boss Howard Wilkinson.

A £1.2million deal was agreed. Cantona became the King of Old Trafford and public enemy No.1 at Elland Road. Celebrating scoring for Leeds’ great rivals upon returning to West Yorkshire probably didn’t help…

Cole was fined £75,000 in 2005 for making contact with Chelsea over a possible transfer. Still contracted to Arsenal, huge controversy arose after he met Jose Mourinho and chief executive Peter Kenyon in a hotel to discuss a move.

He remained in north London for another year, but the Gunners’ offer of a new £55,000-a-week contract left Cole “trembling with anger”, as he infamously wrote in his autobiography.

When Chelsea and Arsenal met in 2006, the Gunners’ supporters labelled their former favourite “Cashley” and waved fake £20 notes with Cole’s face on from the stands.

Owen was a Liverpool hero from the moment he scored his first goal against Wimbledon in 1997, going on to score a further 157 for the Reds over eight seasons.

The striker spent a majority of his career hampered by injury but sympathy was in short supply when he did the unthinkable in 2009 after his contract expired with Newcastle United.

Despite his history with Liverpool, Owen could not resist the urge to move to bitter rivals Manchester United on a pay-as-you-play deal.

The former England international’s name has now been tarnished with Liverpool supporters, some of whom have made calls to strip him of his title as club ambassador, while he is hardly a popular figure among United fans.

In 2000, despite interest from Manchester United, Barmby became the first Everton player since Dave Hickson in 1959 to join Liverpool, in a deal worth a reported £6million.

The midfielder went on to rub salt in the wounds by scoring Liverpool’s opener in a 3-1 win against his former club in the Merseyside derby, on his way to winning the FA Cup, League Cup and UEFA Cup in his first campaign at Anfield.