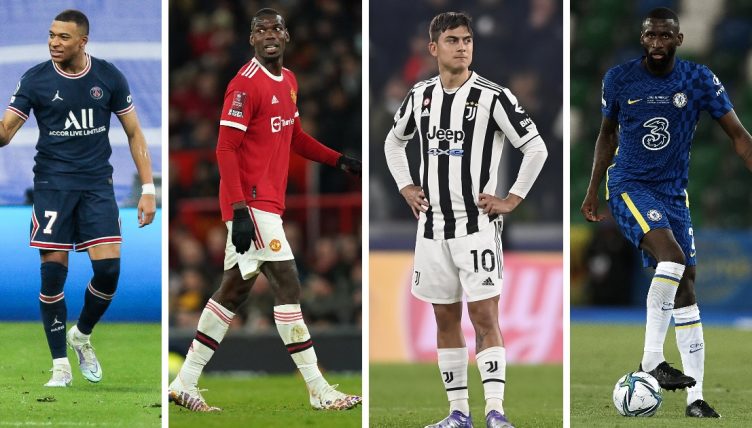 The summer transfer window is fast approaching and a string of high-profile players are nearing the end of their lucrative contracts. There’ll be plenty of intrigue surrounding the next destination of these stars – and we’ve taken a stab at predicting where they’ll end up.

There’s been an increasing trend of elite players running their contracts down and leaving their club on a free transfer – something increasingly seductive for clubs willing to invest in a player’s wages but eschewing the sky-high transfer fees that are common in 2022.

We’ve identified nine of the most high-profile free agents this summer and predicted where they’ll end up next season.

Look, it’s been common knowledge for months that Mbappe will be heading to Real Madrid in the summer. All we’re waiting for is the official confirmation.

Pogba’s second spell at Manchester United has been underwhelming and there seems no sorrow, from either party, that the midfielder will leave Old Trafford this summer.

For every mind-bending assist, including four in one game against Leeds, Pogba has infuriated United fans with his aimless performances and inability to string together a season of consistent performances.

Pogba told French newspaper Le Figaro that he played better with the France national team because he knew exactly what was expected of him.

“With Les Bleus, I play, and, on top of that, in my position,” he said. “I know my role, I feel the confidence of the coach, the players.

“It is normal, to feel this difference with Manchester, because it is difficult to be consistent when you change position often, also the playing style or who you are playing with.”

He’ll be in demand this summer, but PSG looks like his preferred destination. Zidane wanted Pogba at Madrid, and there’s every chance he replaces Pochettino in the dugout this summer.

Plus it looks like PSG will be looking for a marketable French World Cup winner to replace Mbappe. It’d be a deal that’d suit all parties.

Juventus revealed on Monday that Dybala’s contract will not be renewed and it’s a decision that makes financial and sporting sense.

They were willing to give the Argentina international a new, five-year deal worth €10 million (€8m plus €2m in bonuses) per annum – prompting disbelief from the Juve supporters.

That, alongside Dybala’s injury record, prompted Juventus to sign Dusan Vlahovic in January but there’s no doubting they’ll miss the 28-year-old.

Nobody has scored more Serie A goals (eight) or racked up more assists (five) for the Bianconeri this season, which is impressive given has only featured in 21 games.

A number of clubs, including Arsenal, Atletico Madrid and Tottenham, have reported interest in the forward but we can see him ending up at Internazionale – Dybala seems settled in Italy and would be an attractive proposition for the current Serie A champions.

Rudiger is a cult hero at Chelsea but, with his contract expiring and the club unable to offer him an extension, the likelihood is that the Germany international will be leaving Stamford Bridge this season.

He won’t be short of takers either; two Premier League clubs, including Manchester United, have registered an interest in Rudiger but we believe the 29-year-old will end up at Juventus.

The Serie A giants love a free transfer and they’ve already proposed a deal to take Rudiger to Turin next season.

We’d be intrigued to see Rudiger’s brand of shithousery goes down in Serie A next season, if nothing else.

Barcelona are in the market for a new centre-back this summer, with Gerard Pique greying by the day, and Chelsea defender Christensen may be exactly what they’re looking for.

Sources in Spain claim a deal will be concluded imminently, with Chelsea in no position to offer a contract extension to the Denmark international.

“It is in doubt. We hear the rumours. The situation with Andreas for many weeks is clear,” Tuchel said in a February press conference.

“We are not happy about it because, me personally, and the club representatives think it is best for him to stay. We rely heavily on him. He did not sign yet. He did not communicate. This is also a signal to us.

“Communication from his side is that he did not sign until now. We have to consider the possibility that he leaves us.”

Christensen has age on his side and would feel confident of becoming a success at the Camp Nou.

Dembele looked set to leave Barcelona upon the expiry of his current contract but his red-hot form in recent weeks has shifted the goalposts at the Camp Nou.

Barca had believed the forward would secure a move to Paris Saint-Germain in the summer, according to Sport.

But Foot Mercato are now reporting that the Catalan club are now keen on keeping the France international as he has nine assists from 12 LaLiga games since being brought back into the team.

If Dembele does opt to leave the Blaugrana, the Frenchman certainly won’t be short of options when it comes to his next destination – and we think he screams ‘Manchester United marquee signing’.

Lacazette has performed admirably at Arsenal this year, especially after the January departure of Pierre-Emerick Aubameyang, but there seems little prospect of a new contract at the Emirates.

The 30-year-old doesn’t score prolifically these days but offers plenty for the team and would grace a number of the continent’s finest sides.

According to Italian outlet ASRomaLive, there is significant interest in Lacazette from Roma, who are keen on signing a new striker to complement the goalscoring exploits of Tammy Abraham.

The lure of living in Rome and the promise of first-team football would be enticing for Lacazette and the presence of Jose Mourinho shouldn’t be too off-putting either.

Yeah, we’re surprised Lingard stayed at Manchester United last summer too. This season has been a wasted one for the sometime-England international.

A move to West Ham seemed inevitable until they became United’s Champions League rivals so a switch to Newcastle appears more likely. Lingard still has plenty to offer and he possesses the talent and personality to become a hero at St James’ Park.

This one is probably the hardest to call.

Eriksen has the ability to make a return to one of Europe’s top clubs – but how many would take a chance on a player who suffered a cardiac arrest less than a year ago.

The 30-year-old’s comeback at Brentford has been one of the most heart-warming stories of the season and we wouldn’t bet against the Denmark international staying in west London next year.

But Gabby Agbonlahor has been talking up a sensational return to Tottenham.

Asked whether Eriksen could rejoin Spurs this summer, Agbonlahor told Football Insider correspondent Connor Whitley: “He could do.

“All he’s got to do at the moment is keep performing, keep those performance levels up. I’m sure Brentford will want to take it easy with him as well.

“He’s back in the Denmark squad now. I’m sure he won’t rule anything out in the summer. Every door will be open for him because he’s still a quality player. It’s crazy how he’s come back this quickly.”