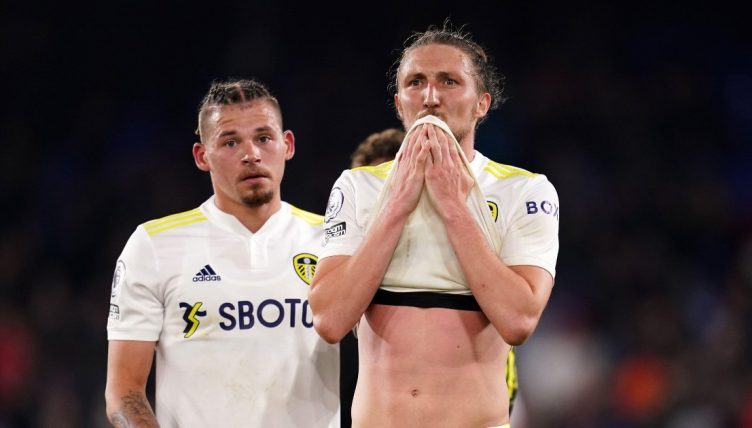 With Daniel James’ red card against Chelsea in May 2022, Leeds not only moved closer to relegation from the Premier League but also became the ‘dirtiest’ team in the history of the competition.

They have now hit 100 total cards for the 2021-22 season, more than any other team have managed in a Premier League campaign.

Those include three red cards. Alongside James, Luke Ayling was sent off for a challenge on Gabriel Martinelli against Arsenal and Pascal Struijk got a straight red for his tackle on Liverpool’s Harvey Elliott.

Leeds already played a very physical form of football under Marcelo Bielsa, but there has been some criticism of the way in which his replacement Jesse Marsch has seemingly overseen a doubling down on hard tackles.

“The yellow cards and fouls are not reflective of a lack of discipline, they reflect a desire on the pitch,” Marsch has recently said, playing down accusations his team are ‘dirty’.

“Of course, the two red cards, we know they crossed the line and that hurt us. Ultimately we don’t want that. But we want to be aggressive and we want to go after the opponent.”

Marsch was hired by the club in order to save them from relegation, but that has turned out to be a harder task than first thought.

Whilst he had a run of good form early on in his reign the club has slowly slipped down the table and are face a serious threat of relegation.

“We asked whether we’re over-motivating them, but even the last team talk I gave before the Chelsea match was calm,” Marsch said.

“Obviously we’ve got a team here that’s aggressive, especially at home, and one that wants to show and perform for their fans. But we’re aware of the fact that the two red cards killed us in the last two matches and we can’t have that again.

“The discipline in these moments is important and we want to be aggressive, but not over-zealous.”

So what other teams in history come close to Leeds this season? Here they are, in order of total cards given from most to least.

James’ challenge doesn’t get better the more you watch it. When even Graeme Souness thinks you should walk, you’ve messed up.

Graeme Souness had no doubts that Dan James' "reckless" tackle was a straight red card 🟥 pic.twitter.com/LTjftQPHHj

But even if they had gone down, they’d have left their mark on the league. 93 yellows was bad enough, but four reds meant that one Derby player walked every 9.5 games.

Two of those went to German defender Stefan Schnoor, whose name sounds exactly like one a no-holds-barred defender should have. Ja.

Everton’s French defender Oliver Dacourt could have entered this list by himself to be honest, amassing an incredible 14 (FOURTEEN) yellows just by himself in 1998-99.

He went on to play for Leeds. Don Revie would have been smiling.

Yeah, we double-checked to see if this was Roy Keane’s Sunderland but we can confirm it was in fact Gus Poyet and Dick Advocaat who oversaw this card-filled season.

Whatever you might think, they did manage to avoid relegation. Two years later, a very sad looking David Moyes might have preferred an extra red or two if it meant they had stayed up.

There was only one straight red in 2014-15. Who was it? Wes Brown of course. You don’t mess with lads from Longsight.

If Leeds manage to stay up, all four of the teams with more cards than Forest 1998-99 will have not gone down.

But Forest didn’t manage it. They finished dead bottom in what was a sorry return to the Premier League, going down straight away after returning at the first time of asking.

With six reds, all for different players, they are also the second most sent-off team in a single season.

We reckon you can already guess who got the most red cards for Arsenal in the 2019-20 season.

It makes sense that Chelsea got a bunch of cards in the 1998-99 season. Roberto di Matteo, Dan Petrescu and Albert Ferrer were all cracking legs on a regular basis.

None got a red, but Gianluca Vialli did. For kicking someone. Makes sense.

What on earth was in the water that year…

Watford were knocked out by Millwall in the FA Cup in 2016-17, which we can only assume was retribution for taking Millwall’s dirty reputation from them.

The Hornets sting was viewed as too much on five occasions throughout the campaign. Two of the reds alone went to Miguel Britos, both for double yellows.

Neither of them were quite this mind…

Thank you for everything Miguel Britos.

Britos did what every Watford fan was dreaming of doing to Knockaert that day. A true hero and a proper hard Centre half.

I will never forget that tackle or that mess of a equaliser against Liverpool. pic.twitter.com/4m59gtU3kO

Eight red cards is just impressive. You have to surely be trying to get as many as possible at that point.

Tim Sherwood got two of them, straight reds of course, while Jason Wilcox got two as well. Chris Sutton got in on the action as well. Not quite as brilliant as this one, though.

Bolton finished seventh in the Premier League in 2007, one better than their eighth placed-finish the year before.

They were clearly helped out by a more down to earth style of play, by which we mean they went to ground way more and got a huge 88 cards.

It’s nice that every team on this list is different because it reaffirms that football is a national game.

Every corner of the country has had a team that proudly tackles hard, and doesn’t care what you think about it.

The second North East side on this list is Middlesbrough 2008-09, managed by Gareth Southgate no less. Maybe that hard tackling is what he needs to take England over the trophy hurdle?

An ode to mid-2000s Blackburn, the peak Barclays mix of silk and steel