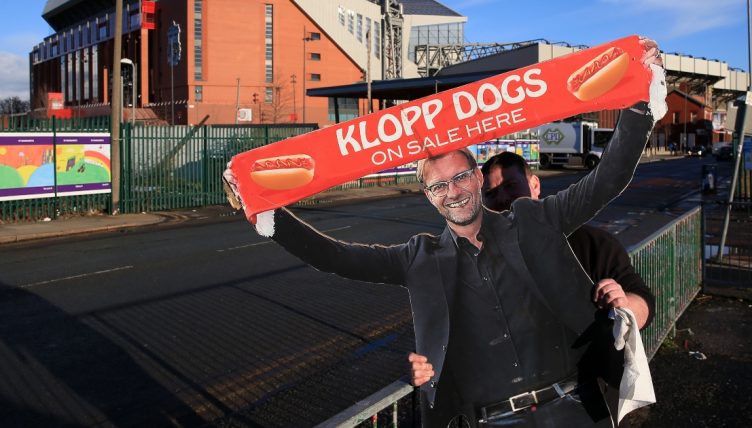 It’s a part of the matchday culture worldwide – meet up with your mates, sink a few beers and sample the culinary delights on offer at the stadium.

But England’s culinary reputation isn’t as bad as it used to be. Drawing influence from all over the world, some clubs have included some genuinely mouth-watering options on their menus.

We’ve ranked the food on offer at each Premier League club, from scran we’d demolish to ones that constitute a breach of the Human Rights act.

The words ‘tandoori’ and ‘masala’ mark a welcome break from tradition at English football, whose clubs have always been strangely reluctant to utilise our nation’s love of curry.

It’s no surprise to see Wolves embrace their substantial Asian community by serving this delicious-looking meal outside Molineux, with the chips acting as a nod to traditional English fare.

At £9, it’s hardly cheap, but we reckon this would be worth every penny.

Tandoori chicken wrap and Masala fries at Wolves (Outside @Wolves)

Sausage rolls already hold an iconic place in Britain’s culinary history but the addition of Red Leicester cheese elevates this east Midlands offering above the norm.

If you want decent football grub, head to the Midlands.

After Wolves and Leicester knocked it out of the park, Aston Villa have taken influence from Birmingham’s large Asian population with their Shish Kebab sold outside Villa Park.

And the inclusion of naan bread in our club’s culinary offerings earns a massive seal of approval from us.

If there’s one owner in the Premier League that you’d expect to rise above mystery meat burgers, it’s Delia Smith – and she doesn’t disappoint here.

There’s something about a hog roast that screams ‘rugby’, but the inclusion of crackling – one of life’s treats – and the image of the meat tumbling out of the bun make our mouths water.

And not just because it’s lunchtime.

It doesn’t get more northern than this offering at Burnley Cricket Club; meat pie, mushy peas and chips slathered in gravy.

You can almost imagine Sean Dyche and his players wolfing down a portion before battering some London-based side at a windswept Turf Moor. Magnificent.

The pie itself is standard, although blessed with a generous amount of filling, but the little club crest on the pastry is a nice touch from Southampton.

And it’s enough to elevate their offering above most Premier League clubs.

You can’t go far wrong with a foot-long sausage slapped into some bread. Especially when it’s slathered in tomato ketchup.

But this pre-match scran at Liverpool would really benefit from some fried onions.

We imagine it was the choice of the consumer to eschew them but fried onions are one of the quintessential football smells in our country and any hot dog is poorer for their absence.

For those not in the know, Scouse is a type of stew, typically made from chunks of meat – usually beef or lamb -, potatoes and onion, and it is associated with the Liverpool region.

Because football culture revolves around chucking different types of food into bread or pastry, this Scouse pie is a favourite of match-going fans at Everton.

Get past the look and consistency of last night’s kebab, which many wouldn’t, and it’s surprisingly tasty at a reasonable price.

Salmon and noodles are a beautiful combination that represents a step away from the reconstructed-offal-in-white-bap offering that’s sustained English football fans for decades.

But this portion size at Spurs would turn even Victoria Beckham into Oliver Twist.

We know there’s a new stadium to pay for and everything but Daniel Levy is being exceptionally tight here.

Salmon and Noodles with a Pint at Tottenham Hotspur (@SpursOfficial)

Not bad, but we’d hardly call those chips. If you’re paying £11, you want some decent chips.

Ah yes, the classic three-course meal of microwaved pie, overpriced confectionary and teeth-rotting alcoholic beverage. With a side order of clogged arteries and spotty skin.

Here’s hoping Newcastle use some of their newly-acquired billions to provide more appetising options to their supporters.

Or three course meal for £7 👍🏼 pic.twitter.com/E8ZCUgiFTA

With their coastal position and affluent population, we were expecting something adventurous from Brighton. Perhaps a mouth-watering fish dish, washed down with some locally-sourced IPAs.

But this kung-po monstrosity looks like something candidates on The Apprentice would serve up to their dissatisfied punters.

The pieces of chicken are the size of tennis balls, the rice doesn’t seem to have absorbed the sauce and the whole thing acts as an endorsement of veganism.

Must do better, Brighton.

The only thing getting loaded here is Watford’s bank balance.

The sausage is too small (behave), the bun looks anaemic and the overall package looks about as appetising as one of John Terry NFTs.

Whatever your views on Chelsea’s ownership, it’s clear the money hasn’t been used on offering supporters some decent scran.

Walk to the Etihad from the tram station and you’re soon met with a multitude of food stalls offering sustenance from every continent (although the chicken balti pie covers several of them).

Much of it is very good. This dry hot dog, that will set you back an eye-moistening £7, definitely isn’t.

We don’t know what’s worse; this dry, soulless burger sold at Selhurst Park, only emphasised by the pitful portion of salad, or the fact that this supporter has taken a bite out of it.

We thought the most misleading advertisers in the world worked for McDonald’s – everybody knows that a Big Mac is 99% more disappointing in reality than depicted on posters across the country.

We were wrong. They work for West Ham, who have cat-fished everybody with their American-style hot dog.

You’d be better off putting your £6 straight into a bin than eating this abomination.

The supplier of Leeds united’s burgers are having their pants down. (@LUFC)

Charging fans £4.50 each too 🥴🥴 pic.twitter.com/BNIlqBFgqt

Mashed potatoes can be heavenly. Scrambled eggs have their moment too.

But together? On the same plate, served with an unbuttered bread roll? We’d have the local hospital on speed dial for scurvy.

Old Trafford may be literally crumbling but even the rats that infest the stadium would turn their noses up at this excuse of a hospitality offering.

Many supporters were disappointed when the tills went down during their recent match against Middlesbrough, preventing fans from purchasing food and drink. They should have been thankful. 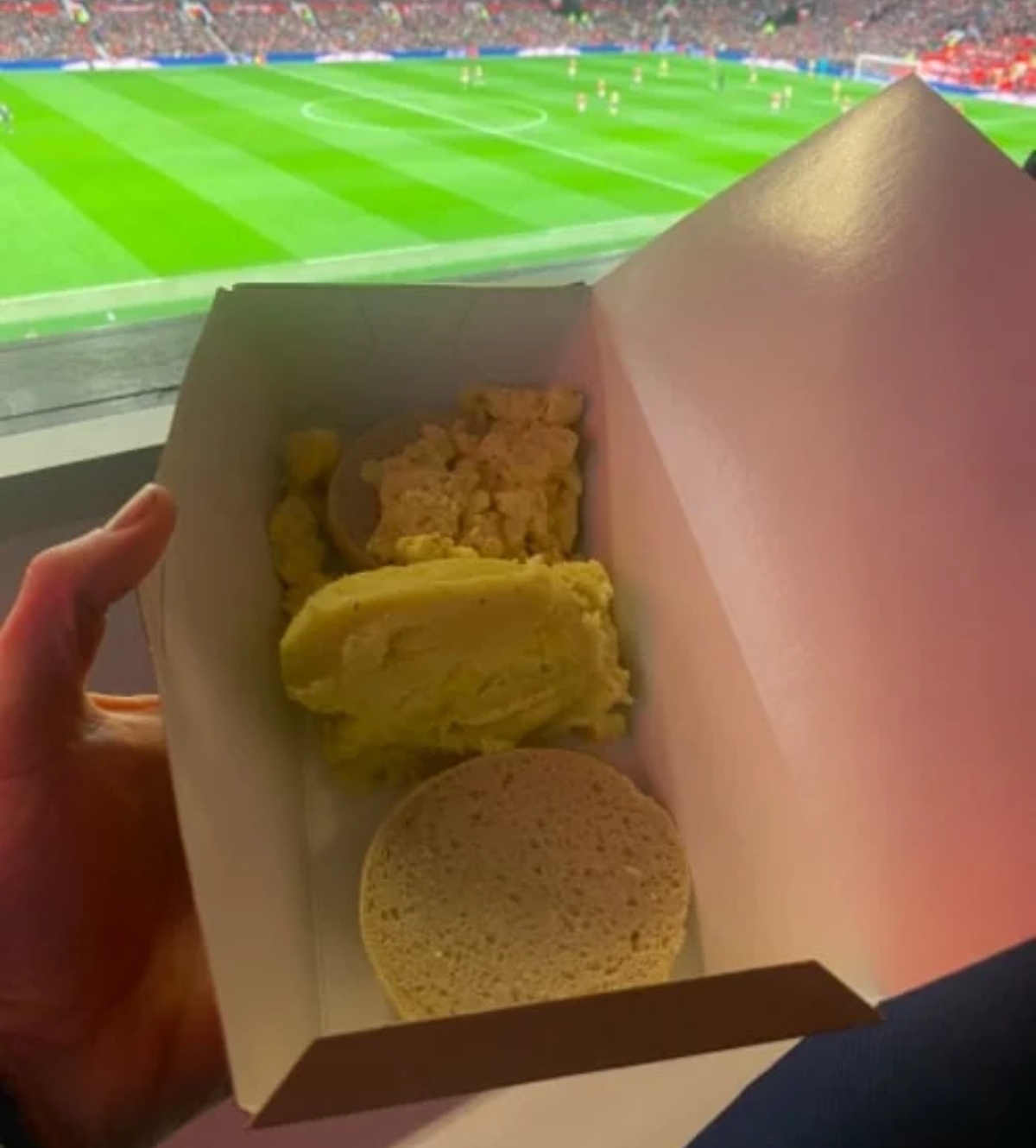