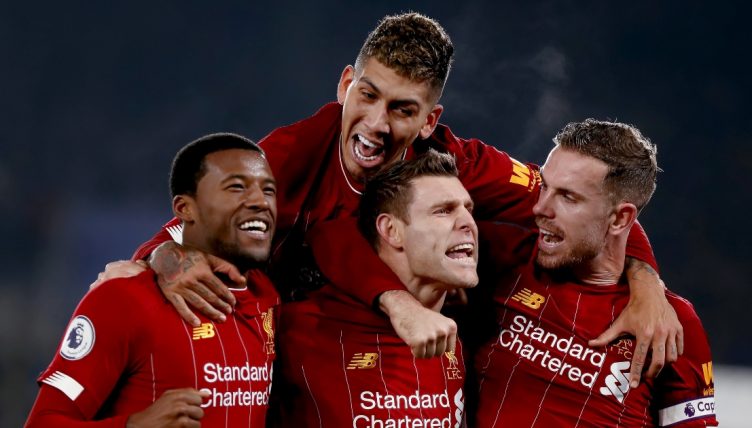 Manchester City will top the Premier League table on Christmas Day in 2021 – and it’s become an increasingly good omen to lead the way over the festive period.

Records show that, while some teams come down with the Christmas decorations, the majority over the recent years have maintained their position and gone on to lift the trophy in May.

We’ve investigated how the Premier League leaders at Christmas over the past 10 seasons fared.

Countless amounts of knowing looks were exchanged when Liverpool smashed Crystal Palace 7-0 last December to ensure their place at the top of the festive tree – two points clear of Manchester United and five ahead of City.

Runaway champions the season before, Jurgen Klopp’s side looked to be moving through the gears until their catalogue of defensive injuries caught up with them.

Their first game after Christmas, when Big Sam Allardyce came to Anfield and secured a 1-1 victory for West Brom, was the beginning of the end. Liverpool suffered six home defeats on the spin and wouldn’t win again at Anfield until Easter.

Finding themselves in eighth by March, a late-season rally was needed to secure Champions League football.

Roy Keane may have called them “bad champions” but Liverpool’s form in 2021-22 has proved their underlying class.

Sitting 13 points clear of their nearest challengers, after winning 17 of their 18 league matches and drawing the other, nobody could have blamed Liverpool fans for thinking Christmas had come early in 2019.

Fuelled by their near-miss the previous year, and with Manchester City slipping from their perch, even the most superstitious of Reds would have realised their 30-year title drought was coming to an end.

A 4-0 demolition of second-placed Leicester on Boxing Day underlined their superiority. Not even a global pandemic could deny Liverpool their long-awaited title, clinching their crown with seven games of the elongated season remaining.

After ditching Loris Karius for Alisson, and benefitting from Virgil van Dijk becoming the best defender in world football, Liverpool were imperious in late 2018 and remained unbeaten before yuletide came about.

A hard-earned win at Wolves, coupled with that Andros Townsend goal against Manchester City, meant they led the table by four points – a lead that’d be extended to seven by the New Year.

But a 2-1 defeat at the Etihad in January would prove crucial. That, alongside a string of draws, surrendered the initiative to City and a relentless title race ensured with neither side blinking in the run-in.

Liverpool acquired 97 points but still finished one behind Pep Guardiola’s side. They consoled themselves with the Champions League title.

City had pretty much won the league at Old Trafford a few weeks before Christmas 2017, thrashing United 2-1 and making Jose Mourinho concede the title, in that gracious manner of his, afterwards.

Pep Guardiola’s side were awesome throughout 2017-18 and led the table by 13 points as England settled down for its turkey dinner.

That gap would extend to 18 by the season’s end as City became the first top-flight side to record 100 points in the history of English football.

Chelsea were top of Premier League for the festive period in 2016, with Antonio Conte’s formation switch proving a masterstroke.

Playing three at the back, liberating David Luiz in the process, Chelsea won 13 games in a row to streak ahead of their rivals, sitting six points ahead of Liverpool on Christmas Day.

And there’d be no slip-ups after New Year. Conte’s side held off a spirited challenge from Tottenham and finished the season as deserved champions.

Seeing Leicester top of the table at Christmas 2015 was the footballing equivalent of spending the festive period in Australia; different, nice to experience a change, but normality would be restored at the first available opportunity, right?

Not so. As the normal challengers took a gap year, Leicester grabbed their chance with both hands and stretched their lead after Christmas.

With Arsenal and Tottenham taking turns to shoot themselves in the foot with a trusty revolver, Claudio Ranieri’s side kept their composure and eventually won the league by 10 points.

They were, by far, the most popular title winners of the Premier League era.

And they celebrated with a massive party at Jamie Vardy's house! 🍾

What an achievement. What a season. pic.twitter.com/jVrUXcjYxJ

A sense of inevitability about this one.

With Mourinho in his productive second season, Cesc Fabregas conducting the play and Diego Costa bastarding goals into the net, Chelsea never looked like relinquishing their three-point lead over Manchester City over Christmas 2014.

Yes, their New Year’s resolution was to give up playing stylish football, but nobody got close to Chelsea over the 2014-15 season and their eventual eight-point winning margin was barely a reflection of their dominance.

Despite a dodgy-looking defence, Liverpool topped the table in 2013 and, in Luis Suarez, possessed the best player in the league. But nobody truly expected them to last the course.

Ten straight victories later, Rodgers’ side stood on the verge of their first league crown since 1990 and Anfield ached in desperate expectation.

We all know what happened next…

Nobody knew it’d be Sir Alex Ferguson’s last season as Manchester United manager, but he was well on the way to winning his 13th title as Christmas 2012 loomed into view.

Victories over Manchester City, Chelsea and Arsenal left United four points clear at the top and they’d spend the second half of the season extending that lead courtesy of Robin van Persie’s goals.

It was Van Persie’s hat-trick against Aston Villa in April that left United with an unassailable lead and Ferguson felt able to take his leave with the club sitting loftily on their perch.

The 2011-12 season was possibly the best in Premier League history, with the two Manchester clubs locked in a rollercoaster title race for the entire campaign.

It was Roberto Mancini’s City that lead the way on Christmas Day 10 years ago, leading United by two points.

They lost the initiative twice afterwards by our reckoning (January and the majority of March/early April) before a surprise United collapse let them back into the race before the final day.

That set the stage for the defining moment of  Sergio Aguero’s career as City won the league in the final minute of the last game.

Look at Man City fans they were frustrated they gave up.
And then this happened.

WHAT A CAREER HE HAD.👏🏽 pic.twitter.com/pnJla5AvFl