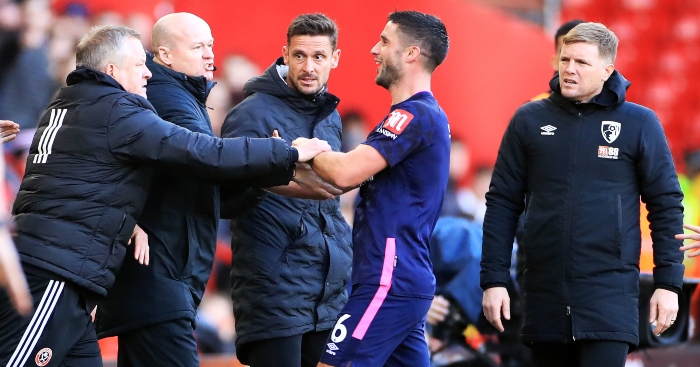 At any given moment, all Premier League arguments are just a step or two away from ‘my dad’s bigger than your dad’ machismo.

If we follow this to its natural conclusion, then, it’s only a matter of time until we’re pitting the 20 Premier League managers against each other in a no-holds-barred brawl.

We know, it’s weird that we haven’t done this before, right? Well, we haven’t, so now we will. Strap in.

We begin these battles, as ever, by figuring out who we can eliminate from proceedings right off the bat.

David Moyes just seems too much of a defeatist to be in consideration. He’d get close to taking out one of his rivals, only to be wracked with self-doubt and end up hesitating just long enough to be taken out by someone more focused.

Roy Hodgson also drops out early, but he’s handed the opportunity to make a dignified exit and drop out without being set upon by a pack of managers hungry for blood. You have to earn that kind of respect over a long and illustrious career, and he’s taken enough hits in said career to fill his rivals with confidence that he’s not a threat.

Speaking of people who aren’t seen as threats, you probably can’t envisage Eddie Howe going rogue and punching someone, or even looking at them funny, but he has staying power. Expect him to hide in a corner, or behind a stack of conveniently-placed barrels, all with a view to sticking it out and attempting (in vain) to form alliances with his bigger, stronger opponents.

Mikel Arteta, as the youngest manager currently in charge of a Premier League club, ought to have a speed advantage over some of the others here. And he would, if he wasn’t the famously calm and un-urgent Mikel Arteta.

Somehow we doubt age will have brought him more urgency, even with this much on the line. He’ll make a couple of smart manoeuvres to dodge attacks from the more attacking managers, but ultimately he’ll be ground down and drop out of the race.

Pep Guardiola isn’t likely to be hugely dissimilar in style, but the Catalan’s experience could work in his favour, helping him know who to buddy up with and who to hide from until they cool down.

That will only get you so far without star quality of your own, though – sometimes you can’t get right to the top without someone else doing the heavy lifting for you. Is this a barb at something else? Make up your own mind.

If you’re looking for someone to surprise you in this battle, Graham Potter could be your man. He’s the type of person with no obvious strong points but no obvious faults either – you think he’ll be easy to brush aside but then he’s still there, clinging on far longer than you’d anticipated.

Ralph Hasenhuttl is similar, looking out for the count before rebounding with a sucker punch out of nowhere and taking out one of the bigger threats. Brendan Rodgers might seem immune to the jabs of the bigger boys, but Ol’ Ralphie hits him in the gut when his guard is down and bam! no more Brendan.

Frank Lampard starts out well, showing a sprightliness we didn’t realise he still had, only for us to eventually realise he’s missing a lot of easy punches and making up for it by exaggerating the ones he does make. That’s all well and good when you’re picking off the also-rans, but eventually you’ll get found out and tossed to one side by Carlo Ancelotti, who ultimately abandons his watching brief to wipe out Lampard before himself deciding any more effort and energy is just going to be unnecessarily exhausting.

Dean Smith tries to get in on the act too, throwing a chair at Lampard and screaming, “That’s for taking Tammy back.” He misses, but wipes out Hasenhuttl and Potter in one fell swoop after the Chelsea manager squeals and ducks out of the way.

While everything else is going on in the foreground, the camera pans to the side where an angry Jose Mourinho, lean and wearing boxing gloves for some reason, is pacing back and forth.

His eyes dart from right to left, then right again, then he’s flat on his back as Nuno wipes him clean out. Solskjaer then stabs the Wolves boss in the back, because he didn’t get that ‘Baby-faced Assassin’ nickname for nothing.

No one’s better at shutting down a cold-blooded killer than Steve Bruce, though – or should that be detective Steve Barnes, of the Newcastle manager’s detective novels. Solskjaer is taken away in handcuffs and no one can be bothered to question whether it’s against the rules.

What is this thing with top coaches touching colleagues head/hair?
Pep does it. Mourinho does it.
And now Solskjær too.

Now, the idea for this piece came from Chris Wilder’s tete-a-tete with Andrew Surman in Sheffield United’s game against Bournemouth. Wilder clearly had no plans to back away from the battle. However, willingness to get into the thick of things isn’t always enough.

Wilder might be able to see off Surman, but he’d stand no chance up against the reach of a Klopp and Farke tag team. There are no tag-team rules put in place ahead of time, but it just sort of… happens.

Sean Dyche is a little taller than Wilder, but even he would stand no chance against a two-man tag team. Especially when he’d undoubtedly go into battle all guns blazing, confident that he will win by sheer force of will, only to find himself on the deck quicker than you can say ‘gegenpress’.

So that’s that, right? Our two German supremos ride off into the sunset together, having vanquished everyone before them? Not so fast – you’re forgetting about one man.

Nigel Pearson has gone for the throat of a Premier League footballer more than 20 years his junior. He has fought off a pack of wild dogs in the Carpathian mountains. The prospect of a managerial royal rumble would be enough to make him salivate at the prospect of doing some real damage.

He’ll hold down Klopp with his left hand and throw Farke onto the mat with his right, all without breaking his stride. And he’ll only grow more powerful for having done it.