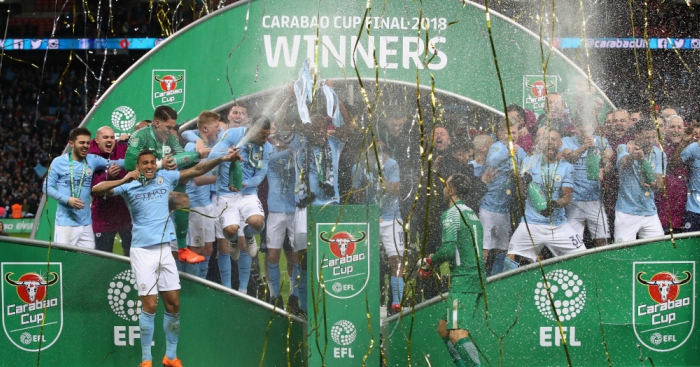 Manchester City claimed their first trophy of the season on Sunday – and now all eyes are on whether they can complete a Treble.

Having wowed supporters with some sensational football under Pep Guardiola this term, City were being tipped by some to complete a clean sweep of trophies.

Wigan Athletic surprisingly ended their FA Cup hopes, but City lifted the League Cup at Wembley on Sunday courtesy of a 3-0 win over Arsenal.

Jose Mourinho seems to place plenty of value on winning the League Cup in order to propel his sides onto further glory, and we’ve taken a look at the records of the past 10 winners of the trophy to see if there is any truth in that.

Manchester United’s performance in the Premier League may have declined following the League Cup final, but Jose Mourinho had eyes on other things, winning the FA Cup and Europa League to secure qualification to the Champions League.

Manchester City had already confirmed Pep Guardiola would replace Manuel Pellegrini, and the side rather crawled to the end of the season, though they reached the Champions League semi-finals. A six-point lead over United at the time of the cup final ended with City only finishing in the top four on goal difference.

A replica of Jose Mourinho’s first season in charge of Chelsea as the Blues followed up success in the League Cup by winning the Premier League at a canter.

City were behind both Arsenal and Chelsea in the Premier League but ended the season as champions pipping Liverpool to the title.

Already safe from relegation, out of the FA Cup and with Europa League qualification secured, Swansea had little left to play for and won on just two more occasions.

Kenny Dalglish may have delivered Liverpool’s last trophy, but a poor second half of the season – the Reds were beaten 11 times in the Premier League from January onwards – saw the Anfield icon leave his post at the end of the campaign.

Birmingham were 15th when they upset Arsenal in the final but plummeted afterwards, winning just twice more and finishing in the relegation zone.

The Red Devils were four points behind Premier League leaders Chelsea at the time of their League Cup final triumph but ultimately fell just a point short of the Blues. After a shock FA Cup third-round defeat to Leeds United, Fergie’s men were also beaten by Bayern Munich in the Champions League semi-finals.

From Boxing Day onwards, Manchester United dropped points on just three occasions on their way to winning the Premier League, while they were beaten on penalties by Everton in the semi-finals and lost 2-0 to Barcelona in the Champions League final.

This trophy aside, Tottenham were underwhelming under Juande Ramos. The following season, Spurs made their worst ever start to a Premier League season and Harry Redknapp was parachuted in.