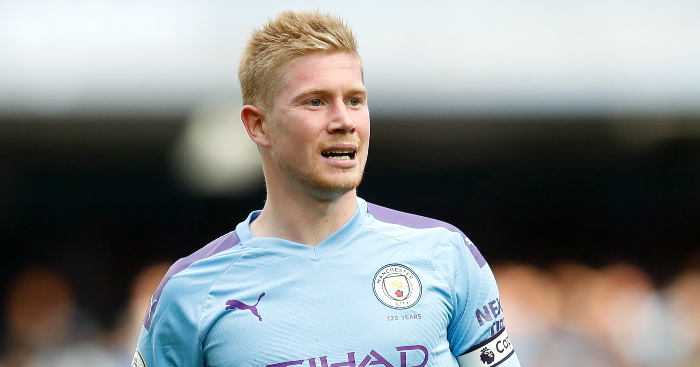 Liverpool and Manchester City are in the top two, Kevin De Bruyne (five) leads the assist charts and Sergio Aguero (six goals) is the top scorer. We might only be four games in but already the Premier League is taking shape.

But what about the other stats? Eden Hazard finished last season as the assist king with 15, John Stones was the top passer in the division with a 94.2% accuracy and  Everton’s Idrissa Gueye was the top tackler with an average of 4.3 per game.

Two of those have left the Premier League, while Stones has fallen out of favour at City, not having played since the opening weekend. So things are bound to look a bit different this year. Here are who are the early frontrunners in a number of key areas.

Unsurprisingly, it’s the reigning champions that lead in a number of key areas. Pep Guardiola’s Man City average the most shots per game (19.3), shots on target per game (7.5) possession (57.9%) and passing accuracy (88.8%). Even at this early stage, they’re odds on to win the title in the Premier League betting.

There are different teams just behind them in a number of metrics. Liverpool have the next most shots per game (17.5) but Chelsea tie them on shots on target (6.3), while Ole Gunnar Solskjaer’s Manchester United actually average the most possession after City with 57.8%. Spurs have the second-best passing accuracy with 86.9%.

Manchester City lead the pack by way of xG (expected goals), while their city rivals United are actually underperforming their xG numbers.

@experimental361 Premier League table based on xG and xG conceced. Not great for the blues as you generally cant out run xg for long. Man Utd overperformed under OGS for aa chunk of games before the wheels came off, same with Arsenal in early part of last season pic.twitter.com/G1FdmbnQjH

Disregarding Moise Kean, who has completed 100% of his passes from his short cameo appearances, averaging five per game, we’ve looked at all players to have played more than 200 minutes.

And it’s a surprise name in the top spot as the tidiest passer. Norwich City midfielder Tom Trybull has a 94.8% passing accuracy – marginally more than the usual suspects Aymeric Laporte and Harry Winks, who average 94%.

Confirming how City like to build from the back, their centre-halves Nicolas Otamendi and Laporte are the two most prolific in the league, averaging 84 and 81 respectively per game.

Seven of the ten most prolific passers are all defenders, with the exceptions Granit Xhaka (78 passes per game) Paul Pogba (76) and Winks (75).

As well as providing the most assists, De Bruyne averages the most key passes per game – four. That’s the final pass before a team-mate takes a shot.

The top dribbler is Arsenal new boy Nicolas Pepe, who averages 3.8 per game, hitting the ground running in the most literal sense.

He also became the first player to dribble past Virgil van Dijk in 50 Premier League games.

Aaron Wan-Bissaka forged a reputation as a keen tackler while at Crystal Palace and he’s living up to the billing at his new club, Manchester United.

The right-back averages 6.5 tackles per game so far – that’s a huge 1.5 more than the next-most, Leicester duo Wilfred Ndidi and Ricardo Pereira.

Ndidi’s out on top in terms of interceptions though, with 4.3 per game.

Aston Villa’s Tyrone Mings has averages 9.8 clearances per game, three more than second-place in that regard, Southampton’s Jan Bednarek. Mings also has the most blocks, averaging 2.3 per game.

Crystal Palace midfielder Luka Milivojevic commits the most fouls so far this season, with an average of four a game.

The 118 Prem players in the final year of their contracts: De Gea, Eriksen, Fraser…