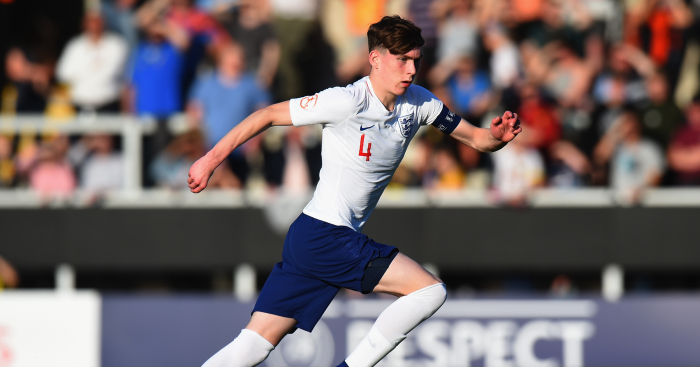 Manchester United youngster James Garner is set to be given his first opportunity in the senior squad when he travels on the club’s pre-season tour to the USA this summer.

Dave Garner, the player’s father, let the cat out of the bag in a tweet which he has since deleted: “Now it’s been announced to his team-mates. I can reveal that James.. Jimmy Garner… A Manchester United U18 player has been selected to tour with the 1st team on their pre-season tour in the USA. Well done son.. Enjoy.”

The 17-year-old midfielder, who has also been deployed in central defence on occasion, is making rapid progress in his career.

After making his debut for the Under-18s just over a year ago, Garner has only played one full season at that level, and signed his first professional contract in May.

United topped the northern section of the Under-18 Premier League last season, finishing six points ahead of Manchester City.

The Red Devils were beaten 3-0 in the final by Chelsea, but Garner was absent as he was on international duty.

Having previously captained the Under-16s, Garner also led the Under-18s when Lee O’Connor was missing, earning a nomination for the Jimmy Murphy Young Player of the Year award from manager Kieran McKenna.

According to Transfermarkt, Garner ended the campaign with four goals and four assists to his name, with YouthHawk noting his “all-action, box-to-box style”.

Continuing the theme of leadership, Garner is captain of England’s Under-17 side, playing every minute as they reached the semi-finals of the European Championships this year, where they were beaten by eventual winners the Netherlands on penalties.

Paul Saffer, who covered England at the tournament for UEFA, praised Garner for “controlling this game in midfield” during the 2-0 victory over Norway in the quarter-finals.

If he keeps developing as he is, learning from #mufc coaches, Garner's a serious prospect…a leader.. https://t.co/Ku0jPpjSgW

On competing against European sides in the UEFA Youth League: “I think if you’re playing different styles, you can develop things in your own game. So it’ll be good to play against another team and we know it’s going to be a tough task as you only come up against the best teams when you’re down to the last 16.

“I’ve played against the top European clubs since I was eight or nine, so I am used to it, but I’m getting into men’s football now and it’s a huge change.”

After signing his first professional deal: “I’m made up. Obviously, it’s what I’ve been working for since the Under-8s and Under-9s. I’m proud for myself and for my family but I think it’s only the start. My mum, dad, grandad and auntie have all come along and it’s just a proud moment.

“I think it’s even more special to sign at Old Trafford. It would still have been special signing at the Aon Training Complex but this is even more special. Winning the league, having a good season and being nominated for the Young Player of the Year and now this just caps it off as a perfect season for me.

“I’m off for a break but will work hard in the close season. When I come back for pre-season, hopefully I’ll hit the ground running and be ready for next season.”

On Jose Mourinho: “Obviously I think Jose Mourinho believes in youth. Scott McTominay has played this year, but you have to earn that chance and I’m just looking to earn mine.”

On Michael Carrick (as told to the Manchester Evening News): “It’s good news (he is joining the coaching staff) and hopefully I can learn from him and work with him next season.”

Where are they now? The 15 youngsters handed Man Utd debuts by Van Gaal