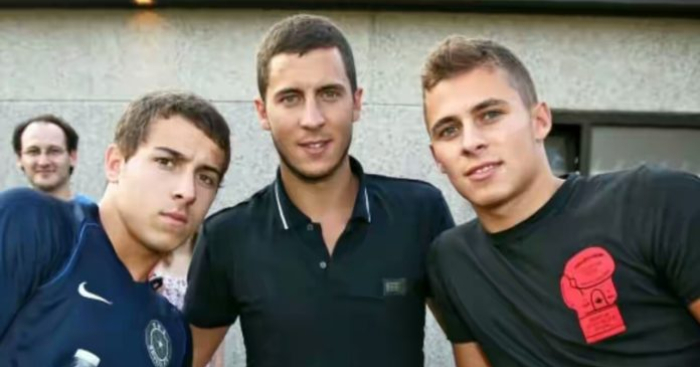 Eden Hazard has been receiving plenty of plaudits for his form for Chelsea this season – but how are his two younger brothers faring at their respective clubs?

After a fine World Cup for Belgium, Hazard has carried that form into 2018-19 under Maurizio Sarri as one of the Premier League’s best performers.

Both Thorgan and Kylian Hazard are also enjoying notable seasons on the continent, and we’ve taken a closer look at their achievements. (There’s even a fourth Hazard, Ethan, but he’s yet to appear at senior level.)

Now an established Belgium international alongside his big brother, Thorgan’s form has been so impressive for Borussia Monchengladbach that reports are linking him with a move to Atletico Madrid.

With 18 months left on his deal, the attacking midfielder, who spent three years on Chelsea’s books without making an appearance, has also emerged as a potential target for Borussia Dortmund to replace Christian Pulisic, who is wanted by Chelsea to play alongside Eden.

Thorgan, 25, has already bagged 11 goals in 15 appearances for Gladbach this season, contributing a further five assists – numbers which even Eden cannot match with the Blues.

He is now into his fifth season with the Bundesliga outfit, who he joined initially on loan from Chelsea before making the move permanent in a £5.9million deal which now looks a bargain.

Hazard appeared in every league game for Glabach last term and became their first player to provide a goal or assist in nine consecutive games since such data started being collected.

Dieter Hecking’s side have been one of Europe’s surprise packages this term, with their fixtures notable for the amount of goals they tend to feature. And Hazard is a big factor in that.

The youngest of the trio at 23, Kylian is still technically on Chelsea’s books, but he was sent out on loan to Cercle Brugge for 2018-19 upon penning a new two-year deal at Stamford Bridge.

Despite a relatively nomadic start to his career, the majority of Hazard’s first-team football exposure came during two seasons at Hungarian outfit Újpest.

An attacking midfielder like his two older brothers, Kylian is trying to establish himself in Belgium’s top flight after a brief taste with Zulte Waregem in 2014-15.

He has so far made seven league appearances and scored once, a late equaliser against Royal Excel Mouscron in a game which Brugge went on to win.

The side currently sit comfortably in mid-table in 10th and, while it appears unlikely he will make the grade at Chelsea, Kylian has been tipped to work his way into the Belgium set-up.

Thorgan Hazard on Kylian Hazard, who’s being tipped for a Belgium call up –

“He's quick and he can dribble and has the best shot of the three of us. He just needs to keep working hard and listen to the coach, but he's definitely improving." pic.twitter.com/jq81xmMqBq