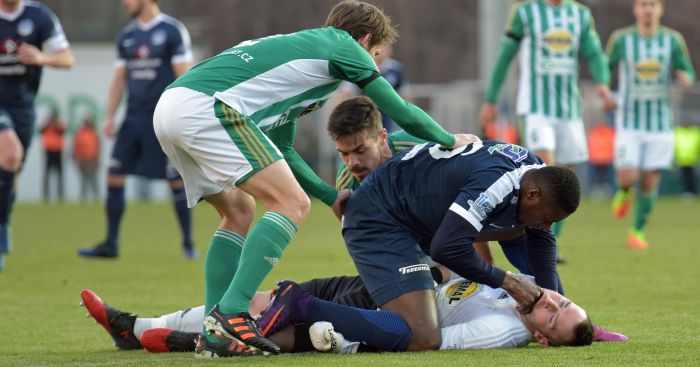 Francis Kone is being hailed as a hero after reacting quickly to stop opposition goalkeeper Martin Berkovec from choking on his own tongue.

Berkovec, who plays for Czech Republic side Bohemians, was knocked out cold when he accidentally collided with a team-mate and Slovacko striker Kone.

Kone was the first to check on Berkovec’s situation with him quickly acknowledging the seriousness of the situation by unblocking his tongue from the back of his throat, saving the keeper from choking.

Amazingly, Kone claimed after the match that it wasn’t the first time he had dealt with a similar situation on a football field.

“It wasn’t the first time I have done that,” said Kone. “It’s something like the fourth time. Twice in Africa, once in Thailand.

“I immediately checked to see if he had swallowed his tongue.”

On Twitter Bohemians showed their gratitude towards the striker: “We want to say thank you to Koné and the emergency team of FC Slovacka for the rescue of our players! You guys! #BOHSLO”

The thanks didn’t end there for Kone as the opposition manager Miroslav Koubek was delighted that Berkovec came away from the incident largely unscathed.

“I would like to put sport to one side and thank Kone, who provided first aid,” Koubek said.

“He acted very professionally in the situation, administered first aid and retrieved his tongue. As far as I’m concerned, that was more important than the whole game.”

And the man himself, Berkovec, took to social media to put on record his appreciation for everything Kone had done.

“I would like to thank Francis Kone for his quick action in saving me during today’s match,” Berkovec said on Facebook.

“I am grateful for the prompt help, and once again THANK YOU!!!”

According to the Daily Mirror, Berkovec underwent a CT scan at a local hospital following the match and is expected to make a full recovery. Fantastic news!