Manchester United have targeted Ajax’s Donny van de Beek as the man to bolster their midfield this summer.

According to widespread reports, United are weighing up a £40million move for Van de Beek, who was left out of Ajax’s squad for their friendly with Eintracht Frankfurt this weekend.

And we’ve compiled eight quotes that sum up his greatest strengths, which have attracted some high-profile admirers.

Speaking ahead of Tottenham’s dramatic second-leg comeback against Ajax in last season’s Champions League semi-finals, Pochettino singled out Van de Beek’s influence on the side.

“Van de Beek. Nobody talks much about him,” Pochettino was quoted as saying by Spanish publication El Pais. “But he has a dynamic in the game, he gets behind Tadic, he arrives, he works, he scores goals.

“Logically, I love De Jong and De Ligt. But the example of the operation of this Ajax is Van de Beek. I like very much. They have a young player, from the academy, in each line, that shows what the team is.”

“Matthijs de Ligt, Frenkie de Jong and Donny van de Beek have made an enormous amount of progress, but Donny has surprised me the most,” Tadic told De Telegraaf in 2019.

“He started to live even more for football. Donny likes to listen to the older players, has started to pay more attention to his diet and to train harder in the gym.

“If you saw it at the start of the season and see it now, that’s a world of difference. Magnificent.”

“Dennis [Bergkamp] started talking enthusiastically about a talent in his youth team. It was a boy who reminded Dennis of himself at that age. That was the signal for me to keep an eye on that guy. That was Donny.”

Speaking to Ajax Showtime, Van de Beek’s father revealed that Dennis Bergkamp wasn’t the only Ajax legend to be impressed by his son.

“I fell completely silent,” Andre said. “Johan [Cruyff] said, ‘I know your son, yes. That is Donny van de Beek. He is good at this and good at that…’ 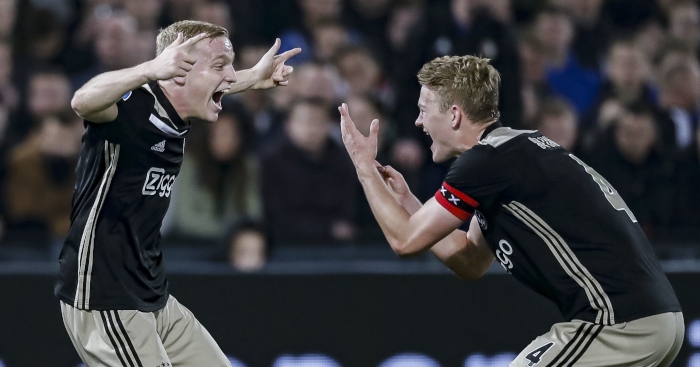 Writing after Ajax’s first-leg victory over Tottenham in last season’s Champions League semi-final, The Guardian journalist noted: “Van de Beek was the real star of the night. He is the most Ajax of Ajax players, a 22-year-old funnelled through the club from early boyhood.

“Van de Beek has been schooled to occupy an interchangeable role, a roaming nine and half, a 10 and a quarter, in a team full of half-players, dual roles, footballers leaning across to fill two spaces.”

“Physically he has always been devastating, since he knows how to attack and defend with the same skill,” Roy told Tuttojuve. “He was very shy but already smart on the playing field. He is a total footballer, offensive runs are one of his great specialties.”