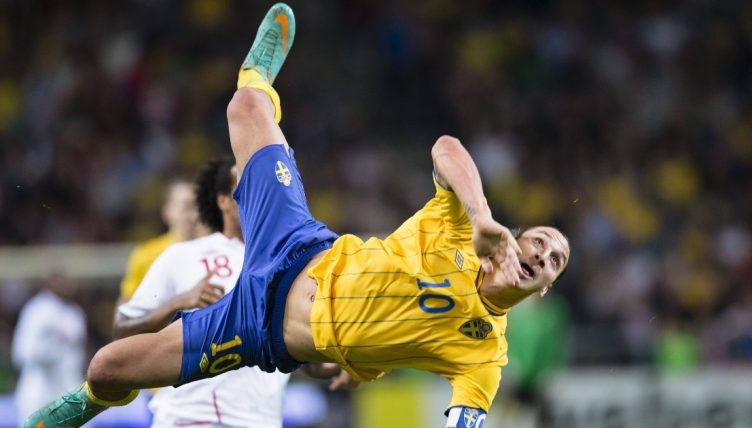 Zlatan Ibrahimovic has scored over 500 goals during his career, but it’s not so much the number of goals he scores that make him special as the outrageous way in which he scores them.

After spells with Juventus, Barcelona and Manchester United, Ibrahimovic continues to prove that he can score in ways which appear physically impossible.

Over his illustrious career, he’s built quite a catalogue of absurd goals. And now we’ve ranked just some of his most outrageous ones in order of ridiculousness.

Because this is Zlatan, it looks like a standard goal. Straightforward. Run of the mill.

But wait for the replay and see how high the ball is when Zlatan strikes it; how he twists his body; how he uses the outside of his boot to get it through the crowd and inside the post.

It’s bottom of our list, but a fine example of Zlatan making the extraordinary look ordinary.

When coaches tell you to “put your foot through it”, they probably mean something like this.

For Inter Milan, Ibrahimovic shows us the devastating consequence of mixing power with accuracy.

Ibrahimovic gets across the defender man-marking him and bullets the ball into the roof of the net – with the side of his boot, no less.

Ibrahimovic has more or less standardised this move to the point of us no longer being surprised when he pulls it off, but at the time, when he was playing for Jose Mourinho’s Inter, it was something never witnessed before.

Ibrahimovic stands tall and lets the ball drop into his midriff. In a move we have now seen several times, he somehow generates enough power to send the ball into the top corner despite facing away from the goal.

A disgustingly good strike from distance. We don’t know what’s more ridiculous: the fact Ibrahimovic decided to strike the ball first time or the fact he manages to put so much whip on the ball.

Against Ronald Koeman’s Benfica in a pre-season encounter, eyes turned away from Juventus’ gorgeous kit for a moment as Ibrahimovic scored this delightful goal.

The ball isn’t at an ideal place for a strike, but Ibrahimovic pulls the trigger regardless and catches the keeper off guard from distance.

Even Gianluigi Buffon didn’t know what to do when Zlatan pulled off a swinging backheel kick in the Euro 2004 group stage match.

Very few players would have the wherewithal to even think of doing this. Even fewer would be able to pull it off.

Ibrahimović is the only player to appear twice in this thread.pic.twitter.com/LTd83ImyQ5

The absolute state of this one.

First, Ibrahimovic turns the defender on the halfway line with a flick. Then he chases down the ball and shoulder-barges the pursuing defender to the floor.

This is all before the big Swede brings the ball into his control and slams it high past the goalkeeper at his near post.

In a match billed as the ‘California Classico’, this wasn’t a bad way for Ibrahimovic to score his 500th career goal.

Goal 500 for IBRAHIMOVIC was crazy 💯🔥💯 pic.twitter.com/uHvAjPi2BT

Ibrahimovic hit the world stage with this goal.

Its ridiculousness stems from him beating the entire backline – including the same player twice – in such a short space, before coolly slotting the ball into the net and wheeling away in celebration. It’s so good we wrote an entire article about it.

In a list full of outrageous goals, this must be the most ridiculous of all. It was an overhead kick from 30 yards, FFS.

#OnThisDay in 2012, Zlatan Ibrahimovic did something which, let's face it, only he can do. That thirty-odd yard overhead kick against England. Sizzled Joe Hart's brain in his head like it was a fried egg. Sensational. pic.twitter.com/Wj7vmmBB8n