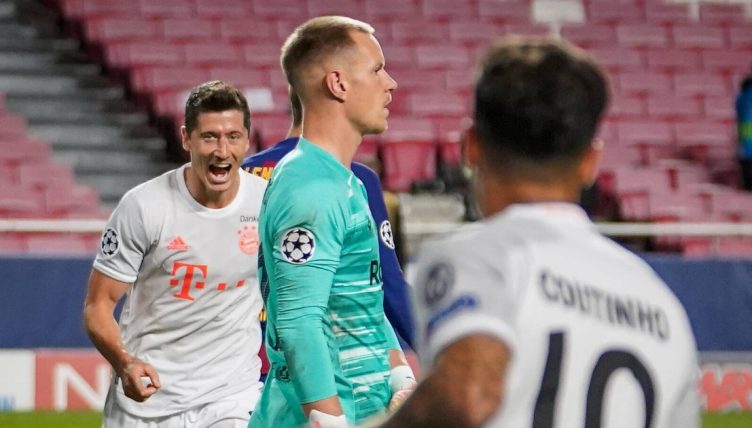 Robert Lewandowski is now a Barcelona player and you can be sure there will be some awkward conversations with his new team-mates about the thrashing he helped Bayern Munich inflict on them on August 14, 2020.

Several members of the current Barca squad were on the pitch when they lost 8-2 to Bayern in the quarter-finals of the competition in 2019-20, while Philippe Coutinho – now at Aston Villa – made things extra awkward by featuring against his parent club.

It was a performance of real attacking quality from the German champions, who went on to lift the trophy that season, and either side could easily have scored more goals than they finished with.

We’ve watched the game back and ranked the goals in order, from worst to best.

A tap-in at the near-post from a low cross. It’s a rule of conceding eight in a game that one of them goes down like this.

Weird that it took Lewandowski 80 full minutes to score, in retrospect. One of those where the line between sharp attacking and passive defending is a thin one, even if you look in isolation, but it’s tidy enough.

Possibly the most ‘Germany v Brazil’ goal of the bunch. Possession lost in midfield, then you blink, then the ball’s in the net. Question marks over Marc-Andre ter Stegen, perhaps, but it’s ruthless attacking play.

Just funny, isn’t it. Nothing quite like a sliced finish that gives your own keeper no chance. Barca get some credit for the defence-splitting ball over the top to start the move.

Look, we can’t stay silent any more, that’s a horrible first-touch. If it’s not already 6-2 then someone probably stops him from scoring. Everything up to that point was very easy on the eye, mind you, and he does well to dig out that finish.

Simply too easy. You don’t let yourself get undone by a simple ball round the corner just 30 seconds after a lucky escape in your own area. Or maybe you do exactly that, for the precise reason that the first escape was so lucky. Again, it’s the good attacking v bad defending debate.

Lovely build-up play involving Serge Gnabry, but it’s the exchange at the end which really makes it. Like a knife through butter, which is much more impressive at 0-0 than later on. Points lost for the untidy finish, though.

Very nice, this one. Beautiful drop of the shoulder to beat Jerome Boateng, and a finish to match. Hell of a game to waste it in.

The game might effectively be over by this stage, but that’s a delightful ball over the top from Thiago. A moment of real quality, which you really wish wasn’t played at a point where the game was already won twice over.

Take it out of this context, though, and… well, just look at it.

The best of the lot.

It’s hard to think back to a time when Alphonso Davies only owned his own soul, rather than that of Nelson Semedo as a little added bonus, but this is the sort of dominance where if the right-back said, ‘I’m sorry, this was too much, I need to retire from all forms of football now,’ then no one would have argued with him.