Where does Diogo Jota’s treble rank among the best hat-tricks of his career? 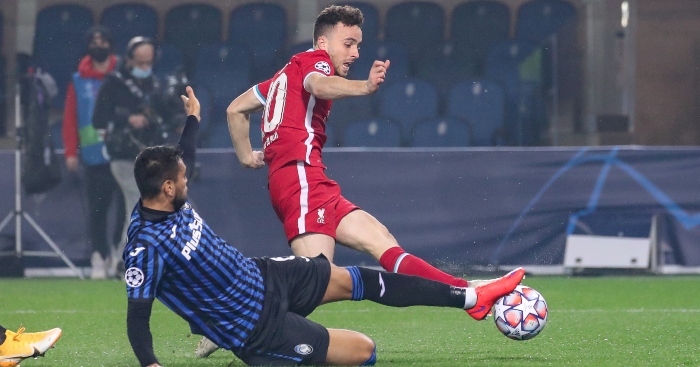 Diogo Jota has really been catching the eye with his match-winning goals and performances for Liverpool in recent weeks.

Having been entrusted to start against Atalanta in the Champions League, Jota came up with the goods once again, scoring a hat-trick to lead Jurgen Klopp’s side towards a 5-0 victory.

This may be the biggest stage on which he’s bagged a treble, but at 23 years old, he already has four others throughout his career. So, naturally, we decided to rank them.

Jota’s goals in this game weren’t exactly spectacular, but they did show how neat he could be from a younger age, with this coming back in 2016.

On a sidenote, seeing him link up so nicely with Andre Silva, who now plays for Eintracht Frankfurt, is incredibly satisfying.

In terms of the timings, this hat-trick is pretty remarkable. Jota only came off the bench in the 56th minute, with Wolves drawing 0-0 in their Europa League match against the Turkish outfit.

His first goal of the game came just one minute after his introduction, while he had all three within 12 minutes. Above all else, it’s his ability to sniff out and convert chances that shines through here.

Look, we know there are three goals here, but we’re just going to skip to the last one. It’s a nice finish from Jota, but everything else around it is just incredible.

Winning a dramatic game? Check. Sending the fans absolutely wild? You bet. Getting the commentator so excited that he can hardly say his name? Just listen to him, anything that can make one man lose his mind like this can only be great.

So, having got his hat-trick against Besiktas, Jota bagged another one in his very next Europa League game, showing great range with this one.

His first showed brilliant anticipation and technique, the second was thanks to intelligent running and finishing, while the third was a great dribble and strike. Ruben Neves’ goal in this game wasn’t too bad either.

This is the biggest stage Jota has got a hat-trick on, and the goals that secured it – especially his first two – simply ooze quality.

The composure and technique for the first, the touch and emphatic finish for the second and the sharpness to get in ahead of the goalkeeper before stroking the ball into the empty net, mean there will be far fewer people laughing about the fee Liverpool paid for him.