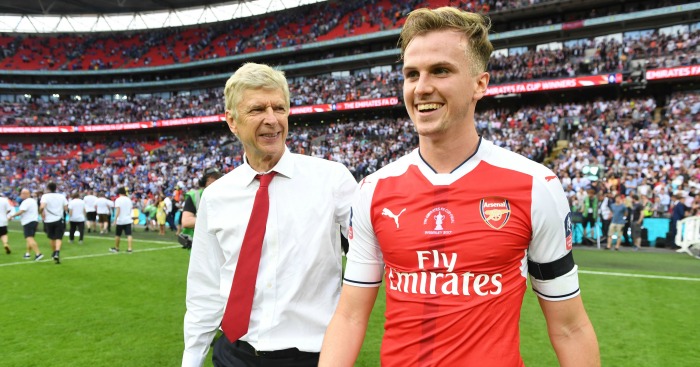 Arsene Wenger was renowned for his shrewd business in the transfer market during his 22 years at Arsenal – but he sometimes got it badly wrong as well.

The former Gunners manager brought players like Thierry Henry, Cesc Fabregas and Robin van Persie to the club, and developed them into world-class stars.

However, Wenger certainly didn’t get it right every time, and that was perhaps particularly true towards the end of his reign. Here we’ve ranked his last 20 signings for Arsenal from worst to best.

Asano joined Arsenal Sanfrecce Hiroshima in July 2016, but he was denied a work permit to play in the Premier League.

After three years on loan in Germany, the striker joined Partizan Belgrade in the summer, having never made an appearance for the Gunners.

Takuma Asano since signing for Arsenal from Sanfrecce Hiroshima for £3.5m in July 2016:

After a successful trial, the goalkeeper moved to the Emirates Stadium from Bristol Rovers in 2013.

However, Arsenal fans could be forgiven for forgetting that he still plays for the club, as the 25-year-old has made just two first-team appearances in six years for the Gunners.

Wenger hailed a 17-year-old Bielik as “one for the future” after signing him from Legia Warsaw in 2015.

However, the midfielder spent most of his Arsenal career out on loan. He only made two senior appearances for his parent club, but after impressing at Charlton, he was sold for a £5m profit to Derby in the summer.

The defender arrived from Greece in January 2018, but injuries have halted his progress, and he has made just seven first team appearances so far.

Debuchy arrived at Arsenal from Newcastle United in 2014, but he suffered with long-term injury problems and made just 29 appearances for the Gunners.

After Arsenal blocked his move to Manchester United in 2016, he returned to France with Saint Etienne two years later.

Kallstrom will go down as one of Wenger’s strangest signings.

The midfielder was brought to the club on loan in the second half of the 2013-14 campaign, but a pre-existing injury meant that he made just four appearances for them.

However, he did score in the FA Cup semi-final penalty shootout win over Wigan in 2014.

“Although my contribution was small in the 120-year history of the club, it was a highlight for me. The greatest 15 minutes of my life” said Kallstrom on his role in the semi-final win.

The Spaniard was signed from Deportivo La Coruna for £17million in 2016, but he struggled to secure a regular first-team role at Arsenal.

Despite scoring a Champions League hat-trick, Perez only got another four goals for the club, and he was sold to West Ham in 2018.

Elneny signed from FC Basel in 2016 and the Egyptian has made 89 appearances for the North London club.

However, he fell out of favour under Unai Emery and is currently on loan at Besiktas, so he doesn’t look to have much of a future at the Emirates.

He does know how to score a screamer though.

The centre-back joined the North London club in January 2015 from Villarreal for £11million, but he failed to impress under Arsene Wenger.

Paulista struggled for game time ahead of Laurent Koscielny and Per Mertesacker, and he moved to Valencia in the summer of 2017.

“In the Premier League, I tried to prove my worth but I didn’t get the chances. When I played, it was often because of an injury to my team-mates,” he said to the Independent.

“I deserved more opportunities. I was sad because I knew I had the ability to play but other people didn’t think so.”

Arsenal spent £35 million to bring the Switzerland international to the Emirates in 2016, but his performances in midfield have come under severe scrutiny and was recently stripped of the captaincy after swearing at his own supporters.

When Arsenal signed a World Cup-winning defender in 2016, they hoped that they had finally found the man to command their defence for a decade.

After a series of calamitous errors, they quickly realised that Mustafi wasn’t the answer to their defensive problems after all.

Ospina joined Arsenal in the summer of 2014, and he went on to start in their 2017 FA Cup final win over Chelsea.

The Colombian also made some high profile mistakes, and he mainly played second fiddle to Petr Cech during his five years with the Gunners.

Mkhitaryan was always going to struggle to fill the void left by Alexis Sanchez, but he really failed to make an impact at Arsenal. The midfielder is currently on loan at Roma and has blamed Unai Emery’s tactics for his poor form.

“He paid more attention to tactics, so my role changed. was starting as a winger, but had to build play with the defensive midfielder. It’s why I couldn’t contribute as many goals or assists,” the 30-year-old said.

Arsenal fans had high expectations for Welbeck after he signed in 2014, but injuries ruined his time at the Emirates and the striker left at the end of last season.

His winning goal against Manchester United in the 2015 FA Cup quarter-final will live long in the memory though.

Chambers joined Arsenal from Southampton in 2014 for £18 million, and he was nominated for the prestigious Golden Boy award later that year.

Despite a promising start to his time in North London, the versatile defender was recently loaned out to Middlesborough and Fulham.

The 24-year-old has had a revival at Arsenal this season and has finally established himself as a key squad member under Unai Emery.

Holding joined Arsenal from Bolton Wanderers as an unknown defender in 2016, and he displayed signs of promise at the Emirates Stadium.

The 24-year-old excelled last season and appeared to be finding his feet in the first team before a ruptured anterior cruciate ligament halted his progress.

Cech made the surprise switch from Chelsea to Arsenal in 2015, and he won the Golden Glove award in his debut season with the club.

Things started to go downhill after that, and he made a handful of costly mistakes before being replaced as the first-choice goalkeeper by Bernd Leno.

For your consummate professionalism, for being the perfect role model, for the 50 clean sheets, for your honesty, your integrity and for your inspiring work with @AFC_Foundation, we want to say…

Aubameyang may have stolen the headlines for Arsenal recently but Lacazette has been a key part of their double act over the past two years.

The French international has scored 38 goals in 97 appearances for the club, and he won their Player of the Season award in 2018-19.

Sanchez became an increasingly unpopular figure during his final days at the Emirates, but Arsenal fans shouldn’t forget just how good he was.

During his three and half years at the club, the forward won two FA Cups and was named their Player of the Season in 2015 and 2017. He also boasted an incredible scoring record, netting 80 goals in 166 appearances.

Things haven’t gone quite as well for him since he left the Emirates though.

Wenger’s last signing proved to be his most expensive purchase as Arsenal spent £56million to sign Pierre-Emerick Aubaemyang from Borussia Dortmund in January 2018.

The Frenchman may have only worked with Aubameyang for four months, but he has since gone on to become one of the manager’s greatest ever signings.

The striker has been a revelation at Arsenal, scoring 50 goals in 79 appearances, and he was recently named their new club captain.

READ: Pierre-Emerick Aubameyang still being this good for Arsenal defies all logic