Barcelona’s love affair with the Netherlands goes back nearly 50 years and continues to this day.

Any Dutch player comes to Barcelona with certain expectations attached to them – ever since a certain Ballon d’Or winner arrived from Ajax in 1973, bringing total football with him.

And we’ve rated all 22 of Barcelona’s Dutch footballers, ranked from worst to best.

Barca supporters never warmed to the big centre forward, but there’s an argument that De Jong’s limitations were exaggerated by a disgruntled fanbase.

A deadline day signing from the Sevilla bench in 2021, the striker could never dream of replacing the outgoing Messi.

De Jong scored six goals in 21 appearances – some of them vital late winners – but always looked an awkward fit for the club defined by tiki-taka. It was no major surprise that his loan deal wasn’t made permanent, but it can’t be said he didn’t do a job when needed.

The striker definitely wasn’t entirely without merit, so the fact that we’ve stuck him bottom of this list shows quite how strong the bond between Barca and the Netherlands is.

Joining from PSV in 2010, Afellay ultimately didn’t amount to much at Barcelona. Or Stoke for that matter.

Nevertheless, he was responsible for one of the most important assists in the club’s history. On for the injured Pedro in the Champions League semi-final against Real Madrid, he came up big with the cross for Messi’s first goal in a 2-0 win.

Ronald and Frank de Boer joined Louis van Gaal’s Barcelona from Ajax in January 1999, but it’s safe to say one of the twins is remembered more fondly than the other.

Ronald contributed to the 1998-99 title win but scored just twice in 37 appearances, something of a letdown after arriving with a reputation as a goalscoring midfielder. He was allowed to leave for Rangers after just 18 months.

Injuries robbed Bogarde of a chance to make much of an impact at Barcelona, with him generally sidelined during his time at the club in the late 90s.

But alongside the De Boer twins, he did manage to play some part when he arrived midway through the 1998-99 season that ended with Barcelona topping the table.

He was sold to Chelsea in 2000, where there’s a space on the substitutes bench named in his honour…

A peripheral figure in Johan Cruyff’s dream team of the early 90s, Witschge has a pair of back-to-back titles and a European Cup to his name despite not featuring a great deal.

He faced stiff competition due to the strict rules on a maximum of three foreign players at a time when the club also boasted Michael Laudrup, Hristo Stoichkov and Ronald Koeman.

Forever in the shadow of his legendary father, Jordi could never quite live up to those impossible expectations. Still, ignore that and he was a solid enough player who contributed some important goals before leaving for Manchester United.

Goalkeeper for the national team, Cillessen is a capable presence between the sticks, but he was never able to usurp the imperious Marc-Andre ter Stegen.

Still, he did what was needed when he was given a chance in the Copa del Rey, lifting back-to-back trophies between in 2017 and 2018, though he was unable to make it three in a row as Valencia (where he since moved) recorded a shock win in the 2019 final.

The Champions League winner with Ajax became a dependable club servant at Barcelona.

Playing right-back for seven seasons, Reiziger enjoyed some successes, especially early on as he joined back up with Van Gaal, but his time at the club coincided with a relatively fallow period in terms of trophies.

Zenden arrived at the Camp Nou after his former PSV team-mate Ronaldo, with whom he enjoyed a brilliant on-field relationship, departed.

The pair of them together might have achieved great things at Barcelona, but Zenden didn’t do too badly for himself. Adapting to a wing-back role under Van Gaal, he was a key player in the title win of 1999.

Hesp usurped Vitor Baia in goal at Barcelona, and shone brightly for a short spell in the twilight years of his career, winning back-to-back league titles in 1998 and 1999.

Davids spent just half a season on loan at Barcelona, but he left a massive impression. He joined while the club was faltering, in a miserable state, but has been credited with turning their form around to finish as respectable runners-up behind Valencia. They looked like no-hopers before he arrived.

Exceptionally good under Frank Rijkaard, Davids helped buy his compatriot time and patience in the dugout. Rijkaard then went on to win two league titles, ending a run of five years without one, as well as the Champions League.

Depay is an exciting player – all strength, flair and a fuck-the-world attitude – and performed well in a difficult debut season for the Catalan giants.

The current leader of the Dutch attack scored 12 league goals in 2021-22, making him Barca’s top scorer in La Liga.

Injuries and the arrival of Robert Lewandowski have pushed him to the periphery in year two, but it can’t be said that he didn’t fulfil his duties when needed. Still, it wouldn’t be a major surprise to see him depart the Camp Nou in 2023.

Memphis wins it from the penalty spot! 👏

Barca complete the comeback to beat Elche 2-1 and keep their momentum going 🔵🔴 pic.twitter.com/vh3AHpS2HO

Overmars did well in Spain after signing from Arsenal, alongside Emmanuel Petit, in 2000.

Blessed with blistering pace, Overmars was a shining light in a relatively mediocre Barcelona side, while a niggling knee injury denied him the chance of making a more consistent impact.

The antithesis to the tidy metronomic passing of Xavi and Andres Iniesta, Van Bommel showed Barca there are other ways to win.

The competitive tough-tackler, one of football’s greatest sh*thouses, was a big part of the Barcelona side that won the La Liga and Champions League double in 2005-06. That was his only season at the club, how’s that for a batting average?

Famously described as a “kamikaze pilot”, Neeskens’ aggression and energy in midfield serves as a blueprint for the pressing teams of today.

He only won one Copa del Rey and one Cup Winners Cup, and arguably never quite hit the heights he managed with Ajax or his national team, but he nevertheless can be credited as one of the players that helped bring total football to the Nou Camp.

Van Bronckhorst did well at left-back, a new role having played in midfield at Arsenal.

His career might have never recovered after suffering a cruciate knee ligament injury while with the Gunners. But he went on to make over 100 appearances for Barcelona, winning two league titles and the Champions League. What a comeback.

It’s definitely for the best that he stubbornly stayed put and refused to move to Manchester United in the summer.

After a difficult beginning, De Jong has blossomed into Barcelona’s midfield conducter – and he’s working under the perfect manager… 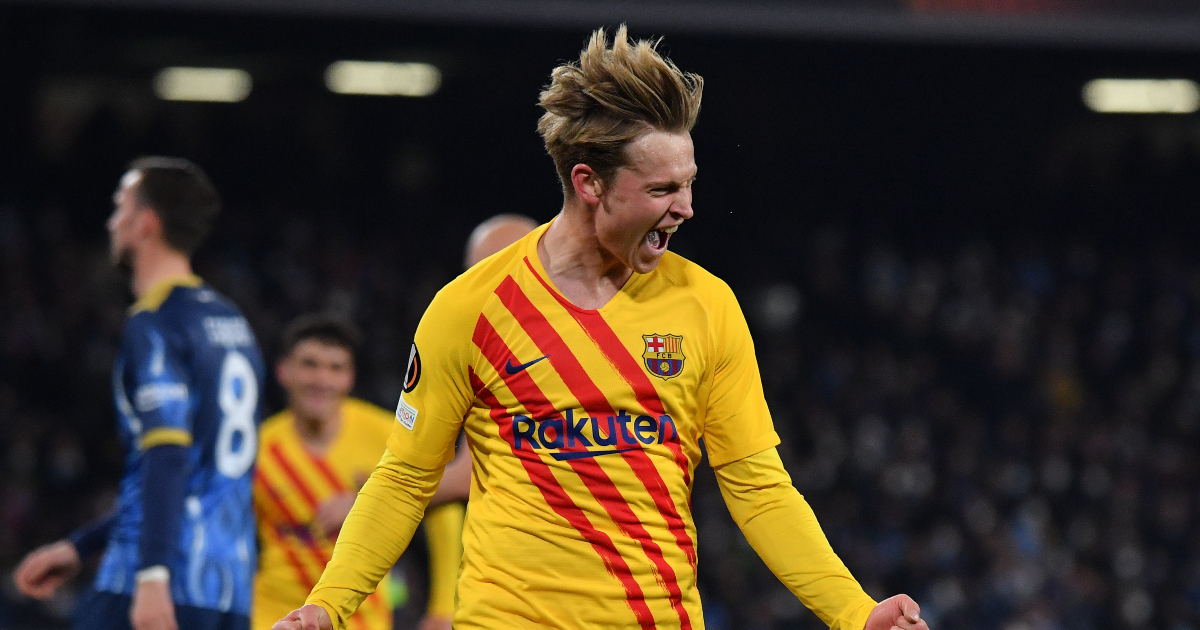 READ: Frenkie De Jong is playing like the Barcelona gaffer: Xavi’s revived him

Cocu won the title in his first year at the club and was later rewarded with vice-captaincy by Van Gaal for his leadership qualities. Five years without La Liga followed but, with a better team around him, Cocu may well have helped Barcelona win more silverware.

No Dutchman has played more games for Barcelona. His intelligence on the pitch has translated well to the dugout, leading PSV to three consecutive Eredivisie titles as manager.

A perfect Barcelona centre-half, De Boer had the calmness and bravery required to play out from the back. “Barca DNA” personified.

He spent the same six-year period at the club as Cocu and didn’t win a great amount of silverware but, at his best, he was a force of nature.

Koeman scored the goal that clinched Barcelona’s first European Cup, and was a key player in Cruyff’s sensational team of the early 90s.

That thunderous free-kick against Sampdoria at Wembley was trademark Koeman, who is the only Barcelona player in history that can rival Lionel Messi in terms of free-kicks.

Forget his ill-fated spell as manager. Koeman was one of the great attacking defenders.

On this day in 1992, Ronald Koeman scored the goal which gave FC Barcelona their first European Cup in a 1-0 win over Sampdoria at Wembley. It was also the last EC, before competition was rebranded as the Champions League in 1992-93… pic.twitter.com/Mx0TCqLotA

The first Dutchman to play for Barcelona is also the man who changed everything. Guardiola, Busquets, Xavi, Iniesta – everything that you’ve come to know about Barcelona’s style of play today is down to the influence of Cruyff.

Arriving at the club after winning the European Cup for three years in a row with Ajax, as well as the Ballon d’Or twice, this was one of the most hyped transfers of all-time.

Thanks to his impact, ending a 14-year wait for the league title, he somehow lived up to those expectations. As a player he brought the mindset and approach that he would later double down on as manager.

“He changed the culture at Ajax and after at Barcelona there was no specific way they played,” Pep Guardiola said of him.

“He arrived and said ‘Guys, we’re going to play that way’ and everyone followed him. Go to the academy and you see the seven, eight, nine-year-olds playing like the first team.

“He created something from nothing. You need knowledge, charisma and personality. To have the charisma for everyone to follow you.”

TRY A QUIZ: Can you name the top scorer for every La Liga season since 1990?