Chelsea don’t seem to have as many weird signings as some of their Premier League rivals, and the reasons for this are twofold.

In the 90s, before they were perennial top four contenders, their go-to approach often involved punching above their weight with big-name players in the twilight of their career, while more recently we have seen them snap up youngsters before they have been able to develop reputations of being ‘good’ or ‘bad’.

We’ve ranked the top 25 based, as always, on how weird they are rather than how well the players performed.

Not the weirdest on this list, but a very good pub quiz question answer at the very least.

Thome was John Terry’s centre-back partner when the future England captain made his Premier League debut, but that would end up being just one of 19 league starts for the club in between stints at Sheffield Wednesday and Sunderland: that sentence alone takes us back to a strange, unfamiliar time.

Chelsea’s loan approach is a minefield, but a continued recruitment of uncapped South Americans is an element we’re still trying to get our heads around.

We could have replaced these two names with those of any number of others in the same boat, but Brazilians Wallace and Nathan have the added bonus of sounding like they could easily be the names of Chelsea pensioners.

Wallace is now without a club after several loan spells, forced away for work permit reasons, while Nathan is two-fifths of the way to doing the same.

We’re used to Chelsea snapping up young talents after just a game or two for their clubs and bunging them into the reserve squad, but Atsu was almost established compared to most of his peers.

The club’s treatment of the Ghanaian was weird, winding back the clock on his Porto and international breakthrough and, indeed his career. Maybe he thought he was past all that, but the Blues had other ideas.

What is it about Chelsea signing strikers after they have suffered injuries and loss of form and still paying well over the odds?

At least we know the Fernando Torres episode wasn’t exclusive to the Abramovich era – they were just as capable of developing 12-month amnesia with Sutton back in 1999, when they signed him off the back of a Blackburn relegation in which his lack of goals played a part.

Chelsea paid £10million for Sutton, a club record at the time, and he scored just one goal to add to the three he netted the previous year for Blackburn. 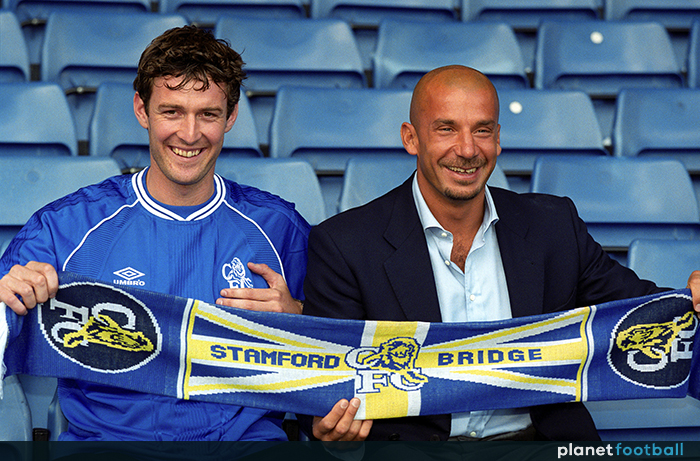 Weah did better than he had any right to at Chelsea, scoring three goals in a half-season loan spell after arriving to score the goals Sutton didn’t.

The Liberian was already 32 when he signed, and his time at the top of the game was coming to an end, but he would be the first of two former Milan and Chelsea strikers to run for office after the slightly less successful Andriy Shevchenko.

There’s another man on this list who played up front for both clubs, but he hasn’t made a presidential run just yet… we’ll get on to him later.

When John Terry left Chelsea, Matej Delač became the club’s longest-serving player. “Who’s Matej Delač?” I hear you ask. “Shouldn’t we have heard of him?”

Well, probably not, unless you follow one of the eight clubs at which he spent time on loan, and even then it’s probably a 50:50 shot.

The Croatian goalkeeper was on the Blues’ books for a full decade without playing a competitive minute – we really hope they gave him a testimonial.

If you’re surprised to learn things didn’t work out for an Englishman brought to Chelsea after impressing at a mid-table Premier League club then I’ve got a Bridge to sell you.

Was Ricardo Quaresma temporarily lost when he rocked up at Chelsea?

Somehow his four-game loan spell was both after he stopped being good and before he started being good, but Quaresma is, and always has been, a man of contradictions.

When John Terry was closing in on first-team action, Chelsea tried to make sure he’d wait patiently by bringing in Høgh, a 33-year-old Danish defender who would end up playing almost as many times for his country as his club during two years in London.

If it was a long-term plan to instil a culture of disdain for anyone under the age of 21, it worked. By any other metric, well…

There’s a reason why Mark Bosnich failed his audition to replace Peter Schmeichel at Manchester United, and that reason was – according to Sir Alex Ferguson – being “a terrible professional”.

You might have expected Chelsea to pay attention to this and hold fire on offering him more than £40,000 per week. We’re not sure if it made things better or worse that they already had three alternatives in goal.

Amelia joined and left Chelsea in between a couple of your blinks around 2015.

When Middlesbrough dropped down to the Championship in 2009, Ross Turnbull was 24 years of age and had 27 Premier League appearances to his name.

He’s now a coach at just 33, the age at which he ought to be hoping for a one-year contract as Chelsea’s non-playing third-choice goalkeeper as a way for the club to meet homegrown player targets.

Whoever told Chelsea you need to sign Belgian players in sets of three has had a perfectly healthy 50:50 success rate.

For every set of Hazard siblings, however, you have the Musondas.

Twenty-two-year-old Charly is still at the club, and even played Premier League football in the 2017-18 season, but we’re still a little confused about the presence of his two older brothers at the club.

It reminds us of Gigi Donnarumma forcing Milan to hand his brother Antonio a contract if they wanted him to stick around – at least it worked.

Yeah, Pierre Issa played for Chelsea. Well, ‘played’ is doing a bit of heavy lifting there.

The South African signed on loan in the same month as Bosnich and somehow contrived to feature even less, playing a grand total of *counts on fingers* zero games.

Speaking of players with zero games, Eduardo doesn’t even tick off the ‘counts as homegrown’ box or the ‘pals with the manager’ box or even the ‘has a brother already at the club’ box.

There’s almost an inherent logic to Miazga’s signing, with the double whammy of cracking the American market and having a defender who would actually play once or twice in the league.

However, more than three years on from his debut, the centre-back is best known for – and I quote – honking an opponent’s dick.

Shame he asked to leave Chelsea before he’d even got to London, really. Even more of a shame they said no.

A bizarre postscript comes in the form of Graeme Le Saux naming Laudrup in his all-time Premier League best XI, despite the Dane playing just seven games in the competition.

Had they known the Dutchman was willing to play chicken with them for several years, showing up and taking his money while daring the club to use him for actual football matches, they’d have probably looked elsewhere.

Oh, you thought the Bogarde deal was top of the pile for Chelsea’s financial irresponsibility? Not so fast.

The young Frenchman was at the centre of a tapping-up controversy which dragged on for years. Still, it was all probably worth it given the huge impact he made at Stamford Br… what’s that? He averaged one league game per year? As you were.

Jürgen Macho and Marco Ambrosio had both signed on the same day and would be fighting it out as backup to Carlo Cudicini, only for the former to pick up an injury.

In came Sullivan, fresh off the Tottenham bench after failing to play a single minute the previous season. One wondered whether the Abramovich money had gained sentience and begun spending itself.

In one sense, Hector’s move to Chelsea at the age of 23 made a lot of sense: he had already been loaned out 11 times by Reading, so he knew how these things worked.

In reality, though, Chelsea’s decision to sign the Jamaica international was akin to putting John Prescott in a boxing ring because you’ve seen him throw a punch.

Incidentally, Hector spent the third of his four (and counting) loan spells away from Chelsea in Prescott’s old stomping ground of Hull.

Some might look at a club signing a player for seven figures and leaving him out of their Champions League squad and put it down to bad planning.

Others will look at the fact that Djilobodji remained in their Premier League squad without featuring, and wonder whether the club was duped into signing the player.

The real galaxy brain approach, though, is to assume residuals from Admow’s song A La Djilobodji made everything worthwhile.

The third and final ex-Milan striker, and the one you had forgotten all about.

Pato arrived on loan during Guus Hiddink’s second spell in charge, a six-month move which we refuse to acknowledge as canon, and competed with bad-but-less-weird loanee Radamel Falceo for a spot on the bench.

The Brazilian scored one goal in his 131 minutes of Premier League football, a better record than either Weah or Shevchenko managed at Stamford Bridge, but is yet to move into politics.

If he did, we’d expect him to show up for the preliminaries before falling asleep during a debate and waking up months later in a different country.