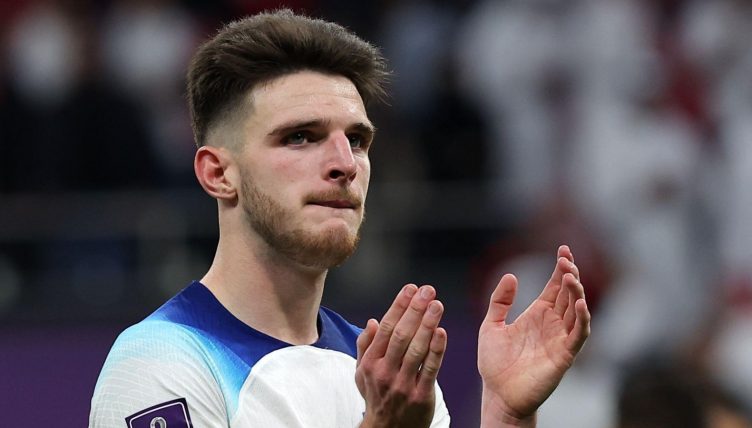 Since lifting the World Cup in 1966, England have become renowned for heartbreaking defeats – and because we love to wallow in our own misery, we’ve ranked the 12 most galling of all.

We often tell ourselves not to expect too much from the England team at major tournaments, but it’s still hard not to get a little carried away when one finally comes around.

Unfortunately, that almost certainly means we’ll be adding to this list for years to come…

After spectacularly blowing a 2-0 lead to lose 3-2 to Portugal in the opener, then beating a poor Germany team but a Germany team nonetheless, nobody quite knew what to expect when England went into their final Group A encounter against Romania needing only a point to progress.

All looked hunky dory at half-time with England 2-1 up, but Nigel Martyn – a last-minute replacement for the injured David Seaman – flapped at a cross and gifted Romania a leveller. A draw was still enough for England, but they couldn’t keep hold of it, with Phil Neville offering himself up as the fabled national scapegoat by conceding a last-minute penalty.

“Another wretched night for England at a major tournament,” declared Clive Tyldsley upon the Three Lions’ latest embarrassment. Arguably, it was their most dismal performance, but though few expected much from Roy Hodgson’s men, they still managed to bring shame upon the shirt, so spineless was their surrender.

Only Marcus Rashford offered any level of composure or incisiveness – and he came off the bench with four minutes remaining.

The picture at full-time summed up the England shambles, with players strewn around the Iceland penalty area after a late corner came to nothing. Joe Hart was among them, using his chocolate hands to ‘front up’ and gesture the kind of apology he weirdly seems to enjoy making.

Graham Taylor took England to Norway safe in the knowledge the Three Lions had not lost a World Cup qualifier for 12 years.

Rather more punchy was the tabloid headline in the wake of the ’93 defeat: ‘Norse Manure’.

Graham Taylor’s surprise decision to switch to a back three backfired, leaving England with the task of having to win in Holland, where the referee went a long way to costing the Three Lions a World Cup place and Taylor his job.

After a series of unfortunate disappointments when often it seemed England failed more due to luck than bad judgement, Steve McClaren came in and reminded everyone just how incompetent the Three Lions can be.

They needed just a point from their final qualifier to reach Euro 2008 and McClaren felt the best way of achieving that was to drop Paul Robinson and David Beckham. “I thought Scott Carson was ready and I stick by that decision,” said McClaren after he watched the young keeper drop an early clanger on the way to a 2-0 deficit.

Beckham was rushed from the bench at half-time and his cross set up Peter Crouch for a second-half equaliser which may have got McClaren off the hook. But, from underneath his umbrella, the beleaguered manager had to watch Mladen Petric bag a 77th-minute winner for Croatia, leaving England out of another major tournament and McClaren’s reputation in tatters.

McClaren’s replacement, Fabio Capello, ensured England didn’t make the same mistake in failing to qualify for the next major tournament, but once they were in South Africa, the Three Lions embarrassed themselves once again.

Given how they struggled to get through a group containing Algeria, United States and Slovakia, perhaps we should all have expected the beating handed to England by Germany in the second round.

Frank Lampard’s ‘goal’ that the officials somehow missed offered Capello’s men an excuse, but even that couldn’t mask the humiliation of being out-paced, out-fought and out-fought by a Germany side who barely needed to break a sweat against one of the most immobile teams to grace the biggest stage.

The entirety of England’s World Cup campaign felt like some kind of mirage as the whole country suffered from sunstroke. A likeable team of players you could relate to coached by a nice man in a waistcoat you would happily buy a pint for.

And then they won an actual penalty shootout and we all couldn’t help but believe. And then Kieran Trippier scored that free-kick and f*cking hell it could actually happen, couldn’t it?

Well, no. Obviously not. And the truth is it kind of felt inevitable as Croatia gradually took control and equalised through Ivan Perisic. Extra-time and Mario Mandzukic was simply death by a thousand cuts, which felt almost kinder than the proper kicks in the b*llocks which follow…

The Germany humiliation was the final nail in the coffin for the ‘Golden Generation’. Six years prior to that, we all thought we might be on to something, especially with Wayne Rooney bursting onto the scene at Euro 2004.

Two wins out of three in the group stage set up a quarter-final meeting with hosts Portugal. Rooney’s brace in the must-win triumph over Croatia led to rising optimism, which reached a peak three minutes into the knockout clash when Michael Owen bagged the opener.

Crucially, midway through the first half, England lost Rooney, who had been occupying the hosts’ defence to the extent that Owen was being ignored. Portugal rallied and had their leveller on 86 minutes. Sol Campbell thought he had won it for England with a minute to go but the referee stepped in to spoil everyone’s fun and usher in extra-time.

The teams traded goals in extra-time, leading to the inevitable penalty shoot out. Just as inevitably, England blew it, with Beckham slipping upon striking his and Darius Vassell seeing his saved by the gloveless Ricardo, who rubbed salt in the wound by scoring the all-important spot kick.

“Three of England’s penalty takers failed with attempts in which the slackness of their body language spoke of men who were ready to put their trust in the belief that their reputations alone would be enough to ensure their success.”

That was The Guardian’s view as yet another inquest opened on yet another shoot-out exit. After a 0-0 draw in which Rooney fell into Portugal’s trap by getting himself sent-off, England managed to out-shamble Portugal, who missed two spot-kicks, with Lampard, Steven Gerrard and Jamie Carragher all failing to beat Ricardo.

That was the end of Sven-Goran Eriksson, and many fans’ belief that this group of players might achieve something.

England played well against the world champions but we suspect Harry Kane won’t forget his missed penalty in a hurry.

In a tournament full of surprises, and a semi-final against Morocco on the horizon, England had a real chance to win the World Cup and will be left wondering what might have been.

Another thriller, more misfortune, more mistakes and ultimately yet another crushing disappointment.

It was all-square in Saint-Etienne after England and Argentina traded penalties in the opening 10 minutes before 18-year-old Owen scored one of the most memorable England goals in recent memory when he outpaced the Argentina backline, beating the deepest-lying defender in World Cup history on the way to smashing England ahead. Then it all went wrong in the moments either side of half-time.

Javier Zanetti caught the England defence napping prior to the break before Beckham lashed out at Diego Simeone in the first minute of the second half, making himself public enemy number one in the process.

Ref Kim Nielsen then denied Campbell a dramatic late winner before allowing Argentina to launch a counter-attack while at least three England players were still celebrating the disallowed goal. And so to penalties. Again.

David Seaman kept out Hernan Crespo’s effort, but Paul Ince missed his too. So the responsibility to take England’s final kick was trusted to David Batty.

“He told me he’d never taken one before, but it didn’t matter,” said Glenn Hoddle. Of course, it did. Not that Batty seemed to care, the bloody rock star.

A stuttering start before a heartbreaking, perhaps undeserved exit… the World Cup in Italy was not the first tournament to follow such a pattern and it most certainly was not the last.

The knives were out for Sir Bobby Robson before the tournament and especially after the opening game – a 1-1 draw with the Republic of Ireland. But England, “a hybrid, a mixture of faces old and new striving towards a common end but barely a team,” according to The Guardian, exceeded all expectations by reaching the semi-finals after dramatic wins over Belgium and Cameroon.

And, inspired by Paul Gascoigne, England edged West Germany during a 90 minutes which gave Robson’s men a taste of the injustice to come when they conceded via a ridiculous deflection off Paul Parker when he tried to block Andrea Breme’s free-kick.

The Germans grew stronger in extra-time and England’s morale took another shattering blow when Gazza was booked for a lunge on Thomas Berthold. “Half a booking” was how Robson viewed the incident but regardless, England would be without their new star for the final.

Alas, it was not to matter. Peter Shilton opted to wait until the German takers had struck their penalty kicks before reacting, by which time it was far too late. In reply, Stuart Pearce smashed his straight at Bodo Ilgner, while Chris Waddle’s flew over the bar, even if it was closer than the TV pictures made it seem. 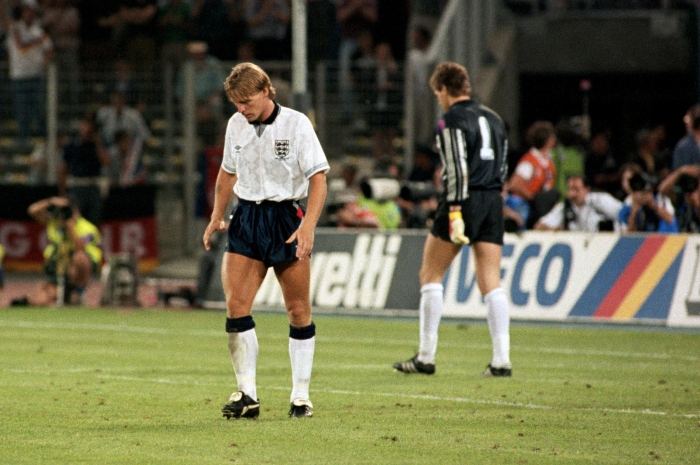 It took a long while to recover from Turin. Around six years to be more precise. Which made it all the more painful when those old wounds were ripped open on home soil.

A dismal showing at Euro 92 and failure to even qualify for the World Cup in 1994 left many fans disillusioned with the national team and pre-tournament controversy involving some shenanigans in the Far East did little to bring the public and the team together.

Beating Scotland, though, then smashing four past Holland certainly healed whatever rifts had developed. Seeing off Spain on penalties, with Stuart Pearce banishing his own personal demons of 1990, set up another meeting with Germany in the semi-finals.

Revenge wasn’t even high on the agenda, such was the positive feeling sweeping the nation at the time. On our own turf, this was the best opportunity we had to end the 30 years of hurt – remember when it was just 30? – and it seemed like England were ready to seize the opportunity, especially when Alan Shearer headed in the opener after only five minutes.

Stefan Kuntz p*ssed on the Three Lions’ chips somewhat by equalising 11 minutes later, but still the optimism remained beyond 90 minutes.

Gazza was again in thick of it in extra-time. Every time we see a replay of his chance in the first period, even now 21 years later, he still seems certain to reach Shearer’s volley across goal and net the Golden Goal. Darren Anderton hitting the post doesn’t get any easier to fathom either.

We only recently discovered England’s players had planned to celebrate a Golden Goal, which would have been the first of its kind, by running straight off the pitch and down the tunnel. It makes those misses all the more heartbreaking.

Perhaps then we should have known what was to come. Germany did what they do, scoring five penalties, but England matched them, until Gareth Southgate stepped up. The current boss blew it, allowing Andreas Moller to smash his spot-kick home and go off around Wembley, strutting like a peacock while England fans dwelt on having their dreams crushed before the customary riot.

After reaching the semi-final of the 2018 World Cup, Gareth Southgate’s side went a step further three years later at the delayed Euro 2020.

They went into the tournament as one of the favourites and played six of their seven games at Wembley, including the final against Roberto Mancini’s Italy.

Luke Shaw gave England a dream start with a goal inside the first two minutes, only for Leonardo Bonucci to score a second-half equaliser. From that moment onwards, a penalty shootout seemed inevitable and that’s exactly what happened.