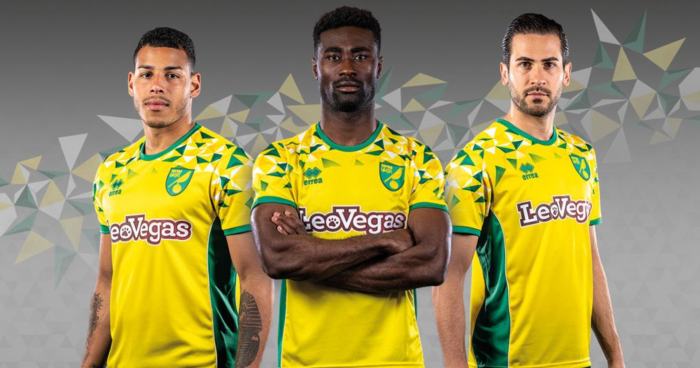 The 2018-19 Championship season is finally here, and as always the 24 clubs will all be sporting new kits.

West Brom, Stoke and Swansea have all dipped into the second tier for the first time in 24 collective years, but none have the best kit going into the campaign – not according to us, anyway.

Here at Planet Football HQ, our contingent of four have had their individual say and we’ve averaged it out, ranking the kits from worst to best.

Far ahead in last place are Wigan, whose tribute to the 1995-98 era has produced what we can only describe as a strikingly poor design.

View a full gallery of the new home kit and training wear and find out more here 👇https://t.co/RDSq3isBxV#wafc 🔵⚪️ pic.twitter.com/W1tjKimMQL

A fairly standard design for Rotherham, but making a sponsor on WordArt is criminal behaviour.

New 2018/19 Puma home kit for Rotherham United, who will be aiming for an immediate return to the Championship when they face Shrewsbury in the League One playoff final at Wembley next week #RUFC #Millers pic.twitter.com/yR9xAhM2pD

Another poor sponsor, and the red on the shorts reminds us of turning up on Sunday morning and having a shirt but nothing else handed to you.

A pretty standard Bolton kit. That is until you notice the badge and Macron logo are wonky. You can’t unsee that sh*t.

Bristol City’s kits, which are produced in-house, have generally been decent in recent years, but there’s not a lot to get excited about here. Also the badge thing is weird.

On childrens’ kits, the sponsor’s logo is replaced by the club’s nickname, Robins, which splits our opinions between a great and awful idea.

Bristol City's new home kit for 2018/19 has been released, a day after the away one. Both shirts will feature different badges this season #BCFC #Dunder #Championship pic.twitter.com/5QChm06UHo

A pretty standard Reading design, but the sponsor takes over, the sleeves look a bit strange and we’re not at all convinced by the back.

Like how Puma have dealt with the back of Reading’s new shirt. Would prefer usual hoops, but at least they’ve not gone for the one-colour madness that adidas love giving clubs. pic.twitter.com/o99OCZaxE0

One of many strange collars, and the badge is way too high up.

This looks a lot worse in real life than in the stock image, but it was noticing that the stripes are uneven that saw Wednesday’s effort so low down the list.

Sheffield Wednesday back in stripes, thankfully. And, what’s more, they say the “kit is manufactured from the superior moist management fabric featuring EVAPOR8 technology…”

A solid mid-table effort. It’s very Brentford. And there’s really not much else to say.

🙌 Our new home kit will be released for pre-order tomorrow at 1pm !!! 🔴⚪🔴⚪#ForeverBrentford pic.twitter.com/dpGvgdVTDd

Something different with the double stripe but still pretty similar to their design last season which had a slightly thicker single stripe. Still rather smart, though.

Introducing our new @UmbroUK home kit for the 2018/19 season!

This divided opinion in the office, but the phrase “glorified Spurs kit” got thrown about a couple of times. And it’s got a strange collar.

👕 We are less than a week away from the new kit going on sale. It will be available in adult and junior sizes from Friday 6th July at 9am.

Smart and vibrant. Would be higher if it didn’t come with an all-white back.

Our Stoke-supporting Editor wanted this slightly higher, largely because of the striped back and sponsor’s logo which blends in nicely for once. But it’s a decent mid-table effort and nothing more.

Decent red details on the collar, sleeve and shorts, and the width of the hoops matching the sponsor and badge is satisfying.

A stylish, retro-inspired design with a good, proper collar to boot.

Our new @pumafootball kit in action at Swindon on Saturday afternoon 👀

A nice, old school feel to Middlesbrough and Hummel’s new kit here, and the detail on the shirt is very nice. The collar is not universally popular among us, though.

Sensational new Middlesbrough kit. Just as adidas revisited some of their classics for the World Cup, Hummel have reproduced their #Boro kit from the mid-1980s.

Yes it’s another gambling company as sponsors, but pleasing that it does not spoil the shirt, the text fits in nicely. pic.twitter.com/EzAJIfTA0A

It’s decent. But then you see the Leicester away kit. And realise you’ve got a stock kit. Adidas gonna Adidas.

Who's getting our new @adidasUK home kit?

A really smart, elegant design, with another nice collar as well. Good.

New signings João Carvalho and Diogo Gonçalves exclusively revealed the new #NFFC @MacronSports home kit yesterday. Pre-order details of how you can get your hands on the new shirt will be released soon.#ThatLovingFeeling pic.twitter.com/pqBv5pDTwL

Umbro kits have been decent on the whole this year, with the sleeve design in particular getting us excited. Derby’s two-tone black and white design is very satisfying to look at.

Arguably skewed by our two-strong Leeds contingent, Kappa have produced yet another simple and strong kit again this season.

📸 | As the doors open on the newly refurbished Superstore, Ronaldo, Luke, Jamal, Kemar and Gjanni show off the new #LUFC home kit pic.twitter.com/ZYe68erklp

Entering into the upper echelons now, Blackburn’s design pays homage to their kit from the 1991-92 season, in which they earned promotion to the newly-formed Premier League. Beautiful.

Inspired by the 1993-94 season, Millwall’s incredibly smart design marks 25 years at The Den.

Villa received a lot of attention when it was revealed clothing brand Luke 1977 would manufacture their kits this season, and what a result. Both home and away are spectacular.

Another tribute to the 1993-94 season is Norwich’s home kit, which was rather garishly covered in the different colours, worn as the club finished a record-high third in the Premier League.

They’ve toned it down and sharpened it significantly for its return, and have a damn impressive away kit to go with it.