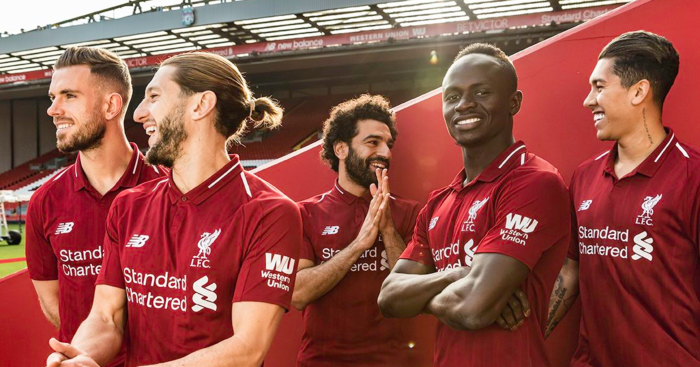 The 2018-19 Premier League campaign is right around the corner and as is modern football, all 20 clubs will be donning new kits.

Manchester United caused a stir by changing from white shorts to black, while new boys Wolves and Fulham have some of the better kits in the division – according to us.

Here at Planet Football HQ, the four of us have had our say – with no bias now thanks to the lack of any Premier League status among the clubs we support – and we’ve averaged it out, ranking the kits from worst to best.

Universally disliked in the office was United’s new design, which features an at-least-different but sadly not-nice lower third, and black stripes rather than the white that Adidas have generally gone with. The kit placed bottom in two of the four of our rankings, failing to make it out of the bottom three in any.

This might be slightly harsh as it’s certainly not a horrible kit, but the strange collar and the stripes ending on the chest was a cause of much discontent in the office.

The sleeves, the collar, the red, three out of four of us hated this. The other voted it seventh best so it does have some fans.

Not awful, not great. If someone told you this was the kit Cardiff wore when they were last in the Premier League, you’d probably believe them.

#CardiffCity is delighted to unveil its new @adidasuk home strip for the upcoming @premierleague campaign.

Stripes on the back as well as the front make this decent enough, but the stripes over the shoulders split opinion. Apart from that, it’s just a standard Newcastle kit and invokes no real strong opinion.

An outlier ranking of second has bumped City’s home kit up to 15th, but there’s something about the collar the other three of us just can’t see past.

We prefer the away kit, and fades aren’t convincing us at all (see 13. Tottenham), but this is nice enough.

The blue detailing on the collar is nice but we can’t help thinking this would simply look better as a plain white below that. .

Spurs and Palace drew on the overall scoring, but three of us ranked Spurs higher.

Shirt alert: Nike have released the new Spurs home and away kits

The very faint diagonal design pushes this higher than it would have been otherwise. It’s the little things. We actually approve of the collar, too.

In a modern take on the old Terrier badge, Huddersfield’s design is smart enough. But as always, there’s only so much you can with a striped shirt.

🔵⚪️ Here's another look at the new 2018/19 @UmbroUK home kit, as modeled by Steve Mounié, Christopher Schindler & @FloHadergjonaj below!

Find out more about #htafc's kit as the Terrier returns to the shirt for the first time in almost 50 years https://t.co/kmUu0uYzLx

Another Umbro kit, this is all well and good until the button comes undone and we immediately dislike it.

“There’s only so much you can do with a blue kit, at least they’ve done something,” said our Editor, as he ranked Chelsea second. And it does come top out of four all-blue kits.

The stage is lit.

Smart and stylish, managing to make the red not too garish as well. Happy with this.

Another club getting a decent Umbro design is Bournemouth, and there’s something about the stripes and sleeve join which fails elsewhere but looks wonderful here.

Rankings varied from 12th to first in the office, but this is smart. And helped by a coherent sponsor’s logo, something which is becoming increasingly rare.

Introducing our Home & Away kits for the 2018/19 season… #ImForever pic.twitter.com/o4wrfg1ZaT

There is just something about this that is really, really nice.

“Yeah but they’re all gonna wear it with the button undone and it’s gonna look sh*t,” was Rob’s take as he ranked Liverpool’s otherwise popular new home kit 13th. At least we can rely on Adam Lallana and Mo Salah.

Another skewed by a really disappointing ranking of 12th, the Editor even ranked Watford’s glorious hornet design as the best despite claiming it “wasn’t a Watford kit”. Without that weird ranking of 12th, this would be top – but you can’t please everyone.

Somehow Wolves has averaged the spot as second best, despite none of us placing it higher than third. It looks nothing like a Wolves kit, but it’s bloody nice. Simple and effective from Adidas, their third entry in the top five.

Full disclosure: This was ranked first by two of our four, but sixth and ninth by the others. But using a mean average, it comes out on top.  The blue-claret balance is spot on, with white shorts and socks to boot, and the standard collar gets a big old yes from us.