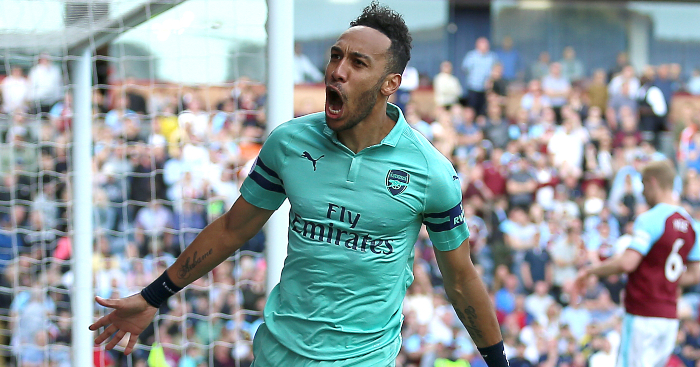 Thierry Henry set a remarkable standard during his eight years in England – and Arsenal’s strikers since have unsurprisingly struggled to match it.

The Frenchman is Arsenal’s all-time top goalscorer with 227 goals, and it would have been bordering on the impossible to replace him with a player of the same quality.

Still, here are the 14 out-and-out strikers to have made their debut for the Gunners since Henry’s departure, ranked by how well they fared.

One of Arsene Wenger’s weirdest signings, Park wasn’t a young player the Frenchman took a chance on but a 26-year-old who’d just been relegated with Monaco.

Park was given Arsenal’s No.9 shirt after signing for the club in 2011, but he made just seven appearances for the club before being released in 2014. We’re still not quite sure what that was all about.

The Arsenal academy graduate thrived for the Under 21s but had a series of unsuccessful loans in the Championship.

Another product of the Arsenal academy, he failed to score in six appearances for the first team.

Sanogo is best remembered for scoring four goals against Benfica in the 2014 Emirates Cup, and that was about as good as it got for him in an Arsenal shirt.

The Frenchman played just 20 times for the Gunners, with his only competitive goal coming against Borussia Dortmund in 2014.

His two goals against Nottingham Forest already makes him better than Akpom, Sanago, Park and Emmanuel-Thomas.

Perez joined Arsenal in 2016 on the back of a tremendous season in La Liga, but he struggled in England and hardly got a chance under Arsene Wenger.

The Spaniard scored a hat-trick against Basel in the Champions League but made just 11 Premier League appearances for the Gunners before spending a season on loan with Deportivo La Coruña and then signing for West Ham in 2018.

Nketiah is another product of Arsenal’s academy, and he made his debut for the club in 2017.

The 20-year-old appears to have a big future ahead of him and is currently on loan at Leeds United as he searches for regular first-team football.

The decision to resign a 34-year-old Henry on a short-term loan deal in 2012 seemed like a terrible idea at the time. Why risk spoiling his legacy with a spell in which he’d surely be a shadow of the player everyone remembered.

And then he went and scored a winner on his second debut against Leeds.

“One of my last acts in the FA Cup was special too: my strike against Leeds when I came back to London in 2012 was my favourite goal for Arsenal,” Henry told The Sun.

“It was so emotional. It wasn’t about technique or about the score, it was what it meant to me.”

On this day 2012 Thierry Henry returned to Arsenal and scored in the win over Leeds United in the FA Cup third roundpic.twitter.com/9J9goq4Vab

The fact that Chamakh is so high on this list tells you a lot about Arsenal’s strikers over the past 12 years.

Chamakh signed for the Gunners in 2010 and scored 14 goals in 67 appearances before going on to have awful spells at West Ham, Crystal Palace and Cardiff.

After Henry joined Barcelona in 2007, Arsenal reinvested that money by signing Eduardo from Dinamo Zagreb.

Despite a slow start, the Croatian adapted to English football and looked like a star in the making until he broke his leg against Birmingham in February 2008.

On his return from injury, Eduardo often found himself on the bench, and he signed for Shakhtar Donetsk in 2010.

Welbeck signed from Manchester United in 2014, but after a bright start to his Arsenal career the goals started to dry up.

The striker also had recurring injury problems, and he left Arsenal at the end of the 2018-19 season having scored 32 goals in 126 appearances.

However, he did score the winning goal against United in an FA Cup quarter-final at Old Trafford and Arsenal fans won’t forget that one any time soon.

While Lacazette has not been able to match Pierre Emerick Aubameyang’s goalscoring statistics, he has still had a pretty impressive two years at the Emirates.

The striker had a brilliant 2018-19 and won Arsenal’s Player of the Year award, and he has scored 38 goals in 91 appearances for the Gunners.

After signing from Montpellier for £10million in 2012, Giroud was often unfairly criticised despite netting 105 goals in 253 appearances for the club. He also won three FA Cups with Arsenal and even earned praise from Henry himself.

“I would have liked to have played with him,” Henry told L’Equipe. “As someone who brings others into play, he is extraordinary.”

However, after scoring against Arsenal for Chelsea in the 2019 Europa League final, Giroud can’t be any higher than second.

Aubameyang has been a revelation at the Emirates since joining Arsenal in January 2018, and his goalscoring record is nothing short of phenomenal.

Since his debut, the striker has converted 26.2% of his shots in the Premier League, which is higher than any other player in that time.

After 50 Premier League games, Aubameyang had a better goalscoring record than Thierry Henry. The Arsenal legend scored 30 league goals for the club in that time while the Gabon international had 33 goals.