Raphinha next? Ranking the 15 Brazilians to play for Arsenal 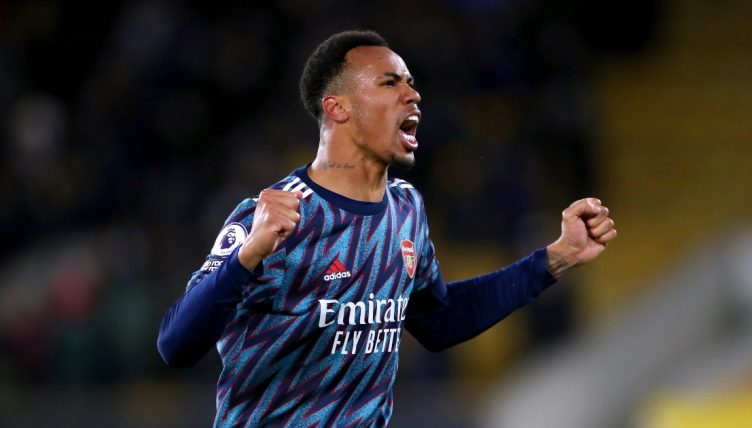 Arsenal are going through a Brazilian revolution, with a number of players from the country signed by Brazilian technical director Edu Gaspar.

According to Goal Brazil, Leeds United talisman Raphinha could be the next to arrive at the Emirates, with Manchester City forward Gabriel Jesus set to follow.

That’s following the capture of highly-rated wonderkid Marquinhos, who has already been snapped up by Mikel Arteta’s Gunners.

However, the new contingent would be joining a group with a mixed record. Arsenal and Brazil’s current teams are a far cry from their sides who dominated the early 2000s, and some of the Brazilians to join the Gunners didn’t exactly bring a Ronaldo or Ronaldinho level of skill or flair.

Sixteen Brazilians have signed for Arsenal in the Premier League era, and here’s how we ranked the Gunners’ Samba ballers, from club legends to expensive disasters. We’ve left out new recruit Marquinhos for now.

Propping up this list is a man who never actually played a game for Arsenal, but look, he was on the books, so he counts, alright?

Botelho signed for Arsenal as a 17-year-old from Brazilian club Figueirense in 2007 but was immediately loaned out to Spanish club Salamanca as he didn’t have a work permit to play in England. Upon returning to the club at the end of the season, he was loaned out again. And again, and again and again. Finally, in 2012, the club gave up on the dream of getting him a work permit and allowed him to leave for good.

Since then, he has spent his career back in his home country bouncing between clubs and divisions, but hey, look on the bright side; Botelho can confidently say he never had a bad game for Arsenal.

Arsenal snapped up Wellington Silva in 2010, expecting to him to be eligible to play due to the FA’s decision to award him a “Special Talent Visa”. However, less than a year later, the FA decided to change their mind, which seems pretty harsh.

A day later, Wellington was thrown into the dreaded world of loans where he’d be stuck for five years, even finding himself at Bolton for a season after becoming eligible to play in England.

By this point, though, Arsenal decided they no longer fancied the poor guy, and he was sold to Fluminense. He’s since been loaned out. Again.

It may be a surprise to have a two-time Premier League champion this low on the list but that’s just how bad Willian was at Arsenal.

Signed on a free transfer from London rivals Chelsea, Arsenal thought they were getting an experienced Premier League winger who could inject some goals into the side in 2020.

Despite not paying a fee, Arsenal still felt ripped off considering Willian’s performances. With just one goal in 35 games in an Arsenal shirt, his lacklustre presence on the pitch contributed to Arsenal’s woeful season where they failed to qualify for Europe for the first time in 20 years.

Willian signed on a three-year deal but tore up the rest of his contract after just a year to return to Corinthians in his native Brazil and the nightmare was over.

“I really thought a lot, together with my family and close people. Unfortunately, my time at Arsenal was not good, I wasn’t happy at the club,” Willian stated in September 2021.

“I don’t need to go into details, but I wasn’t happy and I thought that returning to Brazil was the best option.”

Willian has revealed that when he joined Arsenal he was happy and motivated but after 3 months he had already contacted his agent knowing he wanted to leave the club.

Says fans played a part in his decision to leave. He cites social media as a huge source of messages. pic.twitter.com/5O4sgBYivM

Juan played two games for Arsenal in his time at the club. Yup, we’re in the big leagues now.

He joined the Gunners in 2001 and played once in the FA Cup and once in the League Cup before picking up an ACL injury, later being loaned out to Millwall (no, really). Still, it’s two games better than Wellington and Botelho, so fair play.

He ended up having a solid career back in Brazil, playing over 300 games and even getting capped by the national team.

The Brazilian full-back spent two years in north London after joining from Fenerbache in 2011, struggling to ever really win over the fans.

Despite scoring a handful of goals, including crucial ones against Chelsea and West Brom, Santos often frustrated fans with his defensive errors and endured their wrath when he swapped shirts with Robin van Persie following a poor first-half showing against Manchester United.

He was last seen playing in 2018, back in his home country for boyhood club Figueirense. Oh, and he’s also opened his own restaurant.

Fans of Championship Manager will remember Denilson fondly. Fans of Arsenal? Perhaps not so much.

When the midfielder joined the club from Sao Paulo in 2006, he was spoken of alongside Cesc Fabregas and Robin van Persie as one of the club’s most exciting youngsters, but he never reached the same heights.

Not good enough technically to be a playmaker and not good enough physically to be a ball-winner, Denilson struggled to progress much at Arsenal despite an encouraging start. The fact that he played over 100 matches for the Gunners is more a reflection of their injury issues than his ability, but he played them nonetheless and was capable enough as a backup option.

Arsenal fans had been longing to see some aggression and passion in their team for years when Gabriel Paulista joined in 2015, but the defender may have taken it a bit far.

Despite some decent performances early on, he’s mainly remembered for his meltdown against Chelsea in 2015, after which he was labelled a “hot head” by Wenger and demoted to the bench for the rest of his time at Arsenal.

In his defence, he wasn’t the only one to completely lose his rag courtesy of Diego Costa. We’ve all been there.

These days, he’s actually looking like a decent defender playing for Valencia.

Wenger had been pursuing Baptista for years, viewing him as the ideal replacement for Patrick Vieira, and finally got his man when he signed him from Real Madrid on a year-long loan in 2006, with Jose Antonio Reyes going the other way.

Baptista would turn out to be a disappointment, though, struggling with the pace and physicality of the Premier League.

His form in the League Cup, however, made his time in north London relatively successful, as he netted six times on their run to the final, including a stunning four-goal haul against Liverpool. Yep, he did it before Arshavin made it cool.

Similar to Willian, Luiz joined the club from London rivals Chelsea. An enigmatic player, Luiz’s time at the Emirates was a rollercoaster ride of chaotic mistakes in between great performances.

There were some highs, such as his defensive masterclass against Manchester City at Wembley in the FA Cup semi-final, but this came weeks after one of the most ridiculous performances ever, against the same opponent.

Luiz spent two years at the club where he became a popular figure and inspirational leader for the young players at the club and is overall well respected despite some farcical errors.

The fact Martinelli is sixth on this list at 21 years of age and already has 84 Arsenal appearances under his belt is both testament to his ability and a damning indictment of the others below him (looking at you, Willian).

The teenage sensation burst onto the scene after signing from Ituano in 2019 and scored 10 times in all competitions including a sumptuous solo goal against Chelsea in his first season.

After some injury struggles, Martinelli is now a mainstay on the Arsenal wing, and there is much excitement about the incredible potential and talent the youngster possesses.

The defender, who joined from Lille in the summer of 2020, has quickly become a rock at the back in the Arsenal defence under Mikel Arteta.

A colossal centre-back with an eye for an occasional goal, the 24-year-old has adapted well to life in the Premier League and is the face of a new-look strong Arsenal defence.

A massive upgrade on his predecessors Shkodran Mustafi and Sokratis…

Sylvinho was the first-ever Brazilian to sign for Arsenal when he joined the club in 1999.

His first few seasons were hugely successful as he quickly made the left-back spot his own and was even voted into the PFA Team of the Year for the 2000-01 season, impressing with his defensive capabilities and his attacking threat. However, the emergence of a certain Ashley Cole left him hung out to dry and he left for Celta Vigo soon after.

Don’t feel too bad for him, though — he ended up at Barcelona where he won two Champions Leagues and three league titles.

Yes, yes, we know he’s technically Croatian, but c’mon: he was born and raised in Brazil, his name is Eduardo da Silva and he played for Shakhtar Donetsk. He’s as Brazilian as they come.

Sadly, you can’t see Eduardo without thinking of the horrific injury he picked up against Birmingham in 2008. Before that, though, he was beginning to look like a worthy deputy for the injury-prone Robin van Persie, nabbing 12 goals and nine assists in 28 games.

Upon his comeback, he was never quite the same player, despite flashes of brilliance such as a stunning volley against Burnley. It may be a case of what could have been for Eduardo at Arsenal, but what there actually was wasn’t half bad either.

Edu was initially supposed to join Arsenal in 2000 but the transfer was delayed for a year after it was discovered that he owned a fake Portuguese passport. Once he got finally made it to Arsenal a year on, he proved he was worth the wait.

Despite initially struggling, Edu found his feet by the end of his first season and became an important figure in the iconic Invincibles side, playing just under 50 times that season, capably deputising across the midfield and scoring a few goals against Chelsea.

He’d stay for one more year after this before leaving for Valencia as a fan favourite and has since returned to the club in a Technical Director role, where he has received mixed reviews for his activity in the transfer market.

Topping off the list is, of course, Gilberto Silva: one of Arsenal’s best-ever players, let alone Brazilians.

Buying players off the back of a strong World Cup performance can be risky business — just ask Real Madrid and James Rodriguez — but it worked a charm for Arsenal, who signed Gilberto to replace Petit after his excellent performances for Brazil in 2002.

He proved to be the perfect midfield partner for Patrick Vieira, allowing the Frenchman to make an impact further forward while he sat back and protected the defence, proving instrumental to the club’s success, playing over 200 times, many as captain.

Most, including Wenger himself, didn’t realise just how important Gilberto Silva was for the team until he was let go in 2008. Ever since then the club has failed to adequately replace him, despite the best efforts of the likes of Alex Song and Lucas Torreira.