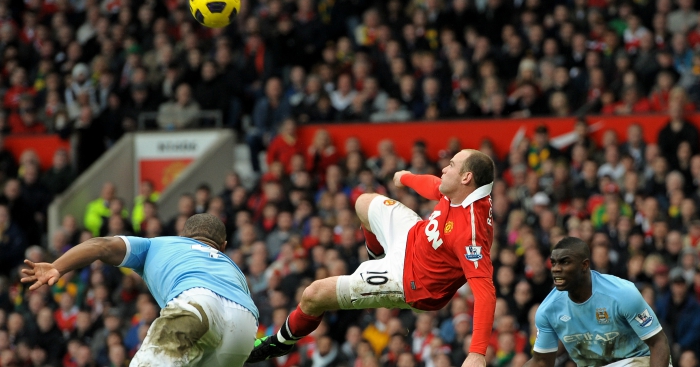 Manchester United, Arsenal, Liverpool and Tottenham players have all won the February Goal of the Month over the past decade – but who has scored the best?

We’ve looked back at every winner of Match of the Day’s Goal of the Month award since 2008 and ranked each by a certain set of criteria.

Using a very exact scientific calculation, we’ve taken into account the distance the goal was scored from, the skill involved, the preceding team build-up play, the strength of the opposition and the importance of the goal.

After considering all of these factors we then realised it’s still pretty much entirely subjective. Sorry.

Distance: Standard ‘not quite edge of the box, not quite what we can call 25 yards’.

Team build-up: Duff does play a one-two with Zoltan Gera – God, it was easy to like that Fulham side – but the video cuts it off.

Importance: A second-half equaliser before a later Bobby Zamora free-kick secured a 2-1 win.

Verdict: The only available online footage is really crap. It’s a quite tremendously boring good goal.

Distance: A finish from just inside the box after collecting the ball out wide.

Team build-up: A nice pass out wide from Paul Scholes, who else?

Opposition: A West Ham side which finished a respectable ninth in the Premier League.

Importance: The only goal in a 1-0 win at Upton Park. United went on to win the league by four points that season. This seemed to be the goal which prompted the clamour which resulted in Giggs winning both the Player of the Year and Sports Personality of the Year awards.

Verdict: It’s alright, isn’t it? But come on.

Skill: The touch to tee himself up for the volley is pretty nice.

Team build-up: James McClean makes himself a nuisance down the wing, as he does.

Opposition: Norwich were actually alright that year, finishing one point above Sunderland in 12th, and were on a six-match unbeaten run.

Importance: The opener in a 3-0 win at the Stadium of Light in a run of games following the appointment of Martin O’Neill which dragged the club away from the relegation zone.

Daryl Murphy is the scorer of today's #dailygoal – a screamer against Wigan from the 2007-08 season! https://t.co/0F2pgYuWTy

Skill: Kick the sh*te out of it. In off the crossbar.

Team build-up: The clip cuts it off, but Andy Reid does actual play a beautiful pass into the striker after breaking from midfield.

Opposition: Wigan. Yeah, alright, although they did actually finish above Sunderland in 2007-08.

Importance: Wigan had hit the bar twice before Murphy’s strike secured a 2-0 victory for Sunderland, who eventually finished three points above the relegation zone in their first season back in the top flight.

Verdict: See Campbell, Frazier. There’s no good footage of the build-up, but at least we’ve got a Vine of the finish. It also earns ‘f*cking hell, that’s Daryl Murphy’ bonus points.

Distance: We’re beyond the realms of 25 yards now and can categorically state that’s a 30 yarder.

Opposition: Southampton, who had Nathaniel Clyne and Sadio Mane playing, were four points above Liverpool in fifth going into the game.

Importance: A third-minute opener as Liverpool won 2-0 at St Mary’s.

Verdict: It’s obviously brilliant, but it feels like the sort of goal that always wins Goal of the Month.

Distance: The kind of position that will make a commentator say, ‘Well if you don’t buy a ticket, you can’t win the raffle.’

Skill: Do we count that drop of a shoulder as a bit of skill when West Ham are so willing to sit back?

Team build-up: This was firmly in Tottenham’s ‘give it to Gareth, he will save us’ phase.

Importance: A last-minute winner as Spurs were 3-2 victors at Upton Park.

Verdict: Imagine having the nerve in the last minute to just go, ‘Give me the ball and I’ll just spank it in the top corner and we can all go home.’

Skill: If someone asks for an example of a goal scored by a striker riding the wave of once-in-a-lifetime form, show them this goal.

Team build-up: The clip doesn’t do it justice, but Riyad Mahrez is excellent in winning an aerial ball, turning, then setting Vardy away.

Opposition: Liverpool, which, of course, means a slightly dodgy goalkeeper, but still.

Importance: The opener on the hour mark as a Vardy brace saw Leicester beat Liverpool 2-0 and remain three points clear at the top of the table.

Verdict: Anything that reminds us of the thrill of watching Leicester City actually win the Premier League is absolutely brilliant.

Distance: A scruffy finish from around the six-yard box after collecting the ball from inside his own half.

Skill: None of it is particularly skill, but it is all undisputed brilliance.

Team build-up: Why do you need other players when you have Eden Hazard?

Opposition: Look, it’s Arsenal. It’s Arsene Wenger’s defensively fragile Arsenal. But they’re still quite good in the grand scheme of things. Certainly too good to be able to do that to them.

Importance: The second goal in a 3-1 win as Chelsea romped towards the title.

Opposition: A remarkable amount of these features involves Sunderland. They were, however, just coming off the back of an eight-match unbeaten run.

Importance: Goals like this transcend importance. (It was the third in a 4-1 win. Arsenal finished comfortably in fourth.)

Verdict: If Arsenal played like this every week they would be everyone’s second-favourite team.

Distance: This goal is almost taller than it is in terms of distance from the goal.

Skill: People say he shinned it, but just look how high up in the air he is. Wayne Rooney, a man fueled by a cocktail of red wine and sausages, has no right to jump that high in the air. Also, if he did shin it, he’s done extremely well to generate so much power and accuracy.

Team build-up: Paul Scholes is authoritative in central midfield while everyone chases a bouncing ball. Nani puts in a deflected cross. Rooney does the rest.

Opposition: Manchester City, the noisy neighbours finally able to challenge for the title.

Importance: The winner in a Manchester derby which helped United walk to the title.

Verdict: You know that saying ‘when pigs fly’? That, right there, is a pig flying and shinning an overhead kick into the top corner of a Manchester derby. It’s a winner in every sense.