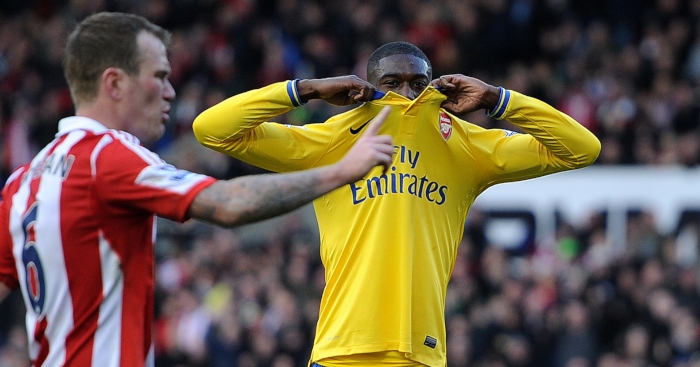 Throughout much of their Premier League history, Arsenal’s francophone contingent have played a large part in their success.

Matteo Guendouzi became the 29th French player to represent the club in the Premier League when he made his debut under Unai Emery, while the club has also fielded French-speakers from Gabon, Togo, Côte d’Ivoire, Cameroon, Switzerland and beyond.

However, for all that international talent, the Gunners have had only seven French strikers in their ranks over that time. We’ve taken a closer look at the septet, some of whom were significantly better than others.

It’s rarely a good sign when your manager needs to remind the media that you are still at the club, but that’s the fate which befell Sanogo towards the end of Arsène Wenger’s tenure in north London.

Sanogo managed to look out of his depth in a game in which he scored four times – an Emirates Cup victory over Benfica – which feels like an achievement in its own right.

He didn’t make it to four goals in official games for the Gunners. Indeed, he didn’t even make it to two, with his only goal in 20 senior appearances coming in a Champions League group stage victory over Borussia Dortmund in 2014.

The former Auxerre youngster also had a spell on loan at Crystal Palace (10 games, no goals), which we’re not sure even he remembers.

Aliadière was supposed to be an academy success story at Arsenal, joining the Gunners straight from Clairefontaine and aiming to follow in the footsteps of some of the other great talents to emerge from the French school of excellence.

He made his first-team debut at 18 and scored his first Premier League goal before his 20th birthday, coming off the bench to bag the final goal in a 5-2 victory over West Brom.

Unfortunately, that would end up being his only league goal for the club, though he did at least have the honour of scoring in a north London Derby when his extra-time strike helped send Arsenal into the 2007 League Cup final – a game he would end up starting as an inexperienced Arsenal XI ran Chelsea close.

Aliadière enjoyed a late-career renaissance at Lorient, but had a tough time of things in the years after leaving Arsenal. However, he revealed that Arsène Wenger has continued to help him out of the kindness of his heart.

Lacazette might well end up higher on this list if he keeps going the way he has, scoring at a rate of one Premier League goal every 158 minutes at the time of writing – not bad for someone who hasn’t always been a guaranteed starter since the arrival of Pierre-Emerick Aubameyang.

He’s not quite at the phenomenal levels of his final Lyon season (36 goals in 44 games), but the 27-year-old has looked every bit the leading man since scoring against Leicester on his Arsenal debut.

He might be higher on this list if the club had won more than a mere Community Shield title during his time at the club, but there are obviously some mitigating factors.

If you check back in a couple of years and Arsenal have returned to their past glories, we’ll have probably snuck Lacazette up a couple of places while you weren’t looking.

It says a lot about the quality of this list that Wiltord finds himself towards the bottom, as the one-time Bordeaux man’s achievements would rank towards the top for most other clubs.

Wiltord is most famous for scoring the winner when Arsenal won the league with a 1-0 victory at Old Trafford in 2002, but his role in the 2003-04 ‘Invincibles’ season placed him more in the ‘supporting cast’ category.

He will forever be associated with one of the most successful periods in Arsenal’s Premier League history, and while he was rarely the main man, his return of three double-figure goalscoring seasons out of four isn’t to be sniffed at.

There’s also the small matter of his equaliser for France in the Euro 2000 final. Make no mistake, he has plenty of big-game career moments to look back on.

It almost feels impossible not to have a soft spot for Giroud, despite the fact he wasn’t always the most prolific in an Arsenal shirt.

The striker’s greatest achievement at club level might still be his role in Montpelier’s unlikely Ligue 1 triumph in 2012, but 98 goals in his first five Arsenal seasons is a pretty significant return.

Giroud’s goals may have dried up after Lacazette’s arrival, but Arsenal fans will always have his assist for Aaron Ramsey’s winners in the 2014 and 2017 FA Cup finals and his late goal against Aston Villa in the 2015 decider.

Well, that and his breathtaking good looks, which count for a lot here.

Anelka was only an Arsenal player for two full seasons, but the impact he made in that period was significant.

The first title is always the most important in ensuring the longevity of a Premier League giant, and the teenage Anelka was instrumental in helping Arsène Wenger’s squad overhaul Manchester United in the second half of the 1997-98 season.

The following year was even more special, with Anelka finding the net 17 times in the Gunners’ first post-Ian Wright campaign and upstaging England with two goals for France at Wembley.

Arsenal made a huge profit on the Clairefontaine graduate, but one wonders what might have been possible if he had been allowed to stay and develop under Wenger’s guidance.

Henry’s stats speak for themselves – 226 goals in 369 games is an outrageous return – but he was about more than just numbers.

The man signed from Juventus helped turn Arsenal into the most-feared team in the country, not just scoring goals but scoring great goals, and the idea of an unbeaten season would have been impossible without him leading the line.

Henry will act as the benchmark, not just for any French striker joining Arsenal but for any striker full stop. Anyone who can achieve even half as much as him will have done well.