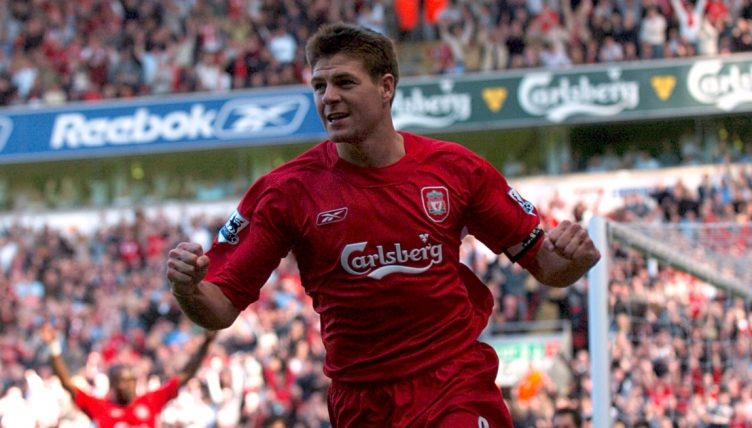 Gerrard was one of the world’s best players during his time at Anfield and regularly terrorised Premier League defences with his goalscoring prowess from midfield.

And the club he currently manages, Aston Villa, were on the receiving end more than anybody else.

We’ve ranked all 13 times Gerrard scored past Aston Villa during his playing days, from worst to best.

Fair play to Gerrard for putting himself about and getting on the end on Gary McAllister’s corner.

But there’s just something aesthetically displeasing about a goal where the ball doesn’t hit the back of the net and we’ve marked it down for that alone.

Plus, Liverpool ended up losing this game 3-1 so we doubt Stevie remembers it himself.

Deep breath, give the keeper the eyes, slot the ball into the corner, trot away with studied satisfaction.

This spot-kick in November 2005 adhered to the Gerrard routine, letter by letter.

Typically well-struck, Gerrard completed his hat-trick in March 2009 by sending Brad Friedel out for a copy of the Liverpool Echo.

Another spot-kick – this one being rolled into the corner with no dramas or histrionics whatsoever.

Almost identical to his other 2009 penalty, but two things caught our attention here.

Firstly, Brad Friedel blinks first here by falling over before Gerrard sticks the ball in the opposite corner.

Secondly, Ashley Young and his enthusiastic encroachment into the penalty area. All in vein Ashley, but full marks for effort.

A pressure penalty, as Liverpool found themselves behind to relegation-threatened opponents.

Did Gerrard care? Did he fuck. Brad Guzan dived the right way but stood no chance of stopping an incredibly well-struck effort.

Finally, no more penalties. We move on…

Aston Villa held a weird hex over Liverpool during the early 2010s, frequently upsetting their loftier opponents such as this 3-1 victory at Anfield in December 2012.

Gerrard scored the Reds consolation that day, glancing home Glen Johnson’s cross to give the scoreline a more respectable sheen.

Gerrard wasn’t quite at his peak in 2002 but was already regarded as one of the finest all-round midfielders in Europe – and this goal showed why.

Liverpool emerged victorious from a topsy-turvy League Cup quarter-final at Villa Park, with Gerrard scoring the third in a 4-3 win.

As Milan Baros’ romp towards goal was rudely cut short, Gerrard latched onto the loose ball and swept it home first-time.

Yes, it’s an intelligent free-kick as Gerrard passes the ball past the helpless Friedel. Not many players would have the vision to conceive of scoring in that manner nor the talent to execute it.

But we were equally as taken with Gerrard bollocking the referee seconds before scoring. By not continuing his tirade afterwards, we missed one of the potentially great comedy routines.

Still, it was an excellent goal and deservedly places high here.

Gerrard was probably the closest real-life equivalent Roy of the Rovers, carrying the side he captained with several long-range winners – and this free-kick in 2007 was a classic of its genre.

Liverpool looked set to be held to a 1-1 draw in the opening game of the 2007-08 season before Gerrard stepped up and curled this physics-defying effort into the top corner to save the day.

The kind of goal that legendary status is built on.

Steven Gerrard scored 13 times against Aston Villa during his career.

Classier than tea at the Ritz, this finish at the back end of the 2000-01 season had every Liverpool fan smacking their lips in delight.

The shaven-headed midfielder capitalised on some good interplay between Danny Murphy and Jari Litmanen, running onto a measured pass and rifling home an unstoppable shot.

We’ve also given extra points for his bizarre celebration, in which Gerrard looks like he’s practising his Live at the Apollo routine.

Good stuff, all around.

Filthy goal of the day: Steven Gerrard vs. Aston Villa in 2001. #LFCpic.twitter.com/yI9Baqv6dX

Here was the crux of Gerrard’s success – there’s no need for nuance or intricate build-up play (which he could definitely do) when you can shitping the ball home from 25 yards out.

Because it’s hard to imagine a more Gerrard goal than this effort against Villa in April 2006, we’ve awarded it top spot.