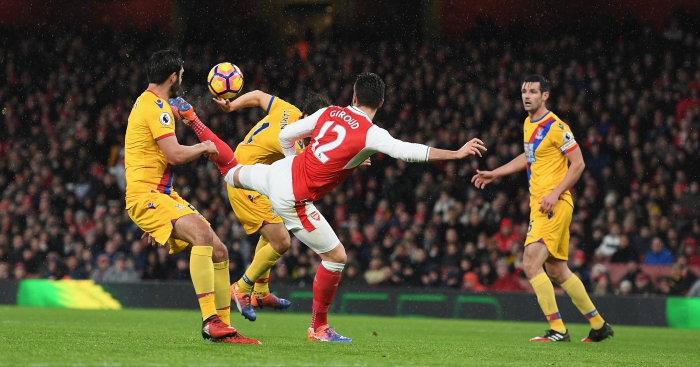 Arsenal, Chelsea, Liverpool and Manchester United players have all won Goal of the Month in January – but which one was the best of the last 10 years?

We’ve looked back at every winner of Match of the Day’s Goal of the Month award over the past 10 Januarys and ranked each by a certain set of criteria.

Using a very exact scientific calculation, we’ve taken into account the distance the goal was scored from, the skill involved, the preceding team build-up play, the strength of the opposition and the importance of the goal.

After considering all of these factors we then realised it’s still pretty much entirely subjective. Sorry.

Distance: Edge of the box.

Skill: A lob is always nice, and the ball seems to come from over the opposite shoulder to what he was expecting, but the bounce and Tim Howard being really quite daft makes it easier for the striker.

Opposition: See above. Everton had a decent season, but just look at that defending and you can tell they have Roberto Martinez as manager and a back four featuring Antolin Alcaraz and John Stones at right-back.

Importance: The second in a 4-0 thrashing as the Toffees melted at Anfield.

Distance: Inside the six-yard box. We’re not sure if that should count for or against it.

Team build-up: Lovely pass from John Terry, to be fair.

Importance: It was the third goal in a 7-2 win. It really didn’t matter.

Verdict: Ashley Cole making himself look like Johan Cruyff against Sunderland has a charm, but the opposition are far too, well, Sunderland.

Skill: There’s a shoulder drop to get away from Cesc Fabregas, but apart from that and a bit of strength it all just opens up for Kane.

Opposition: It is Chelsea. And it is would-be champions Chelsea. But we wouldn’t really call the attempted challenges from Fabregas and Oscar in midfield ‘opposition’.

Importance: The equaliser in a game which Spurs went on to win 5-3.

Verdict: It’s good. But it’s a bit playground. Even John Terry can’t really be arsed to block the shot.

Distance: Weird angle from just inside of the box.

Skill: Sessegnon gives little Leon Britton the runaround, and that finish made us make a weird groan.

Team build-up: We still get a little thrill from a simple one-two.

Opposition: You might not think much to newly-promoted Swansea, but they finished about Sunderland that season, and this was their only defeat in a run of seven matches between Christmas and the start of February.

Importance: The opener in a 2-0 victory which gave the Black Cats some breathing space between themselves and the relegation zone.

Verdict: Pure aesthetic beauty and the fact it reminded us of how classy Sessegnon could be makes for a respectable placing.

Paul Konchesky (@konch3) scored this brilliant goal for Fulham against West Ham in 2009. What a strike!pic.twitter.com/fGkubiOs6J

Distance: Miles out. Absolutely miles out.

Skill: Put yer laces through it.

Team build-up: A few passes across the middle of the park.

Opposition: West Ham enjoyed a decent season, finishing ninth. This was the fourth fixture of a six-match unbeaten run.

Importance: An equaliser for Fulham, but they were ultimately beaten 3-1 at Upton Park.

Verdict: The kind of textbook thunderb*stard which makes the world go round.

Distance: That sweet spot of 25 yards.

Team build-up: Hoof it into the mixer, win the second ball. The Liverpool way.

Opposition: Wolves avoided relegation by a point and had Wayne Hennessey in goal.

Importance: The second in a 3-0 win – the first since Kenny Dalglish returned as boss.

Verdict: Volleys from 25 yards which the goalkeeper doesn’t even attempt to save are always good.

Skill: Introduced the knuckleball to the world.

Team build-up: Just leave Cristiano to it, lads. He’s doing that thing with his legs.

Opposition: ‘Arry’s Portsmouth, who would end the season as FA Cup winners after knocking out United at Old Trafford.

Importance: The second of Ronaldo’s brace which secured a 2-0 win.

Verdict: As we’ve previously established, the knuckleball is well overrated.

Distance: The finish is only from 16 yards or so, but he collects the ball in his own half so that’s really good.

Skill: Very direct, but the evasion of the tackle designed to wipe him out and the way the ball never really leaves the toe of his boot at such pace is very impressive.

Team build-up: Yeah, it’s all Bale really, but the two flicks to get the ball to the Welshman are nice.

Opposition: Probably not as bad as you first thought – Norwich finished 11th in the Premier League that season. They had just been knocked out of the FA Cup by Luton, mind.

Importance: An 80th-minute equaliser. This was around the time when if Spurs were losing they could just give the ball to Bale and he’d save them.

Dele Alli scores the winner at Crystal Palace away with the goal of the season, a 19 year old confident enough to try that, incredible pic.twitter.com/8L1ksxb8hG

Distance: Edge of the box, right on the D. Quite nice.

Team build-up: It’s all about Dele, obviously, but the ‘let’s just ping it around the 18 yard box unopposed’ is a welcome novelty.

Opposition: A Crystal Palace team in the midst of a five-match losing streak. One of those losses came against Aston Villa, who were one of the biggest sh*tshows to ever grace the division.

Importance: Spurs went on to win 3-1, but this goal put them back ahead in the 84th minute.

Verdict: It’s obviously brilliant, and gets a lot of points for its sheer uniqueness, but the volley is a bit of a daisy cutter so it can’t win.

Team build-up: All the good stuff about Arsenal. None of the bad stuff. Brilliant.

Opposition: Admittedly, a pretty crap Crystal Palace still recovering from Post-Pardew Stress Disorder and yet to be properly Big Sammed by a January transfer window.

Importance: The opener in a 2-0 league victory.

Verdict: It won the Puskás Award, so who are we to argue?