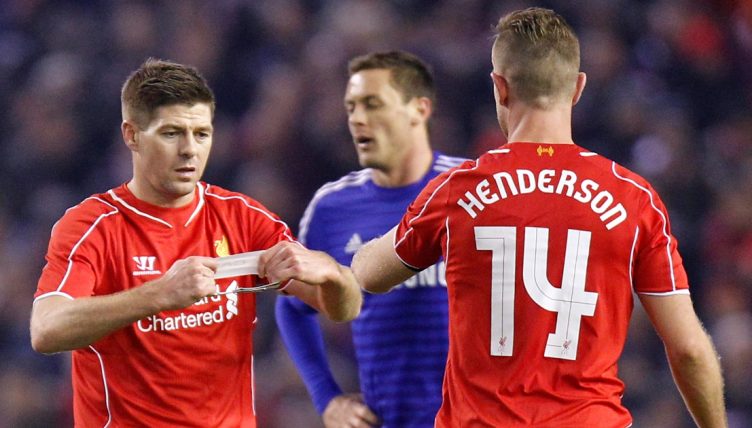 Liverpool have had some legendary leaders in the Premier League – but their captains haven’t always been able to deliver success.

Jordan Henderson has been skipper for over half a decade and may well soon write his name into the record books as the first Liverpool player to lift the Premier League trophy.

Here’s how we’ve ranked him and the other seven permanent Liverpool captains since 1992, ordered from worst to best.

Redknapp had been Liverpool’s vice-captain before being promoted to club captain by Gerard Houllier in 1999.

However, his best years came before that and he missed the entirety of the 2000-01 season due to a series of injury problems and was unable to play in the FA Cup, League Cup and UEFA Cup finals.

The midfielder still lifted the FA Cup on behalf of his team-mates but only made another eight appearances for the club before joining Tottenham on a free transfer in 2002.

So, as harsh as it is, based on his contributions as captain, Redknapp is bottom.

Wright led Liverpool to the FA Cup as captain in 1992 and retained the armband for the start of the Premier League era, but the Reds had a disappointing season in 1992-93, finishing sixth and trophyless.

The England defender would go on to enjoy another five mostly good years at Anfield, but he lost the armband in 1993 so, like Redknapp, can’t feature too highly.

He lost the armband in 1993 but still went on to spend another five years at the club.

Barnes had an excellent career at Liverpool, but the winger was coming towards the end of his career when he was appointed club captain in 1996.

He made 47 appearances for the Reds in 1997-98 and that proved to be his final season at Anfield before he joined Newcastle United on a free transfer.

Despite previously spending six years at Manchester United, Ince was named Liverpool captain after joining the club from Inter Milan in 1997.

“I just felt Liverpool were a club where they had some very, very exciting players, Michael Owen coming through as a young kid, and I needed something different,” Ince told the Liverpool Echo in 2019.

“That change in attitude, that change in mindset, because they hadn’t won anything for years and they wanted to win the title.

“So I thought it was a project for me to kind of go and do, and change the way the Liverpool players were thinking, because I just felt they were good players, but just wanted to go out all the time, and I just thought that wasn’t the way.

“I just thought they needed that professionalism on the pitch, it was probably the right move for me to do because it was exciting.”

During his two years on Merseyside, Ince helped Liverpool to a third-place finish followed by a disappointing seventh-place finish in 1999.

After being deemed surplus to requirements by Houllier, he was transfer listed and sold to Middlesbrough for £1million.

Like Barnes, Rush was in the twilight of his career when he was appointed club captain in 1993 during his second spell at Anfield.

However, the Liverpool legend scored a not-too-shabby 45 goals in 128 games wearing the armband and helped them win the 1995 League Cup.

He eventually lost his place to Robbie Fowler and Stan Collymore and joined Leeds United on a free transfer in 1996.

Robbie Fowler and Hyypia both filled in for Redknapp when he was injured, but the centre-back got the armband on a permanent basis in 2002.

However, the captaincy seemed to affect his performances, and he was replaced as Liverpool captain by Steven Gerrard midway through the 2003-04 season.

Hyypia regained his best form without the pressure on his shoulders, playing over 400 games for the club before joining Bayer Leverkusen in 2009.

Henderson was often a much-maligned figure in his early years at Anfield, but the midfielder was named as their official club captain in 2015 following Steven Gerrard’s departure and has gone from strength to strength ever since.

The 32-year-old will go down in folklore as a European Cup & Premier League-winning captain with the Reds. He’s since completed the set by lifting the FA Cup last term, after winning a second League Cup for good measure.

“Overall though, it’s been an amazing journey so far, one that I have thoroughly enjoyed,” Henderson told Liverpool’s official website in 2019.

“I think everyone would appreciate that no matter what – through the good and the bad times since I’ve been here – I’ve always given everything for the team, for the club.

“And that’s what I will continue to do, it’s the most important thing; continue to work every day for the team, the club, the fans, for everyone.”

"If he lifts the Premier League he'll be one of the best captains to play for the club."

Jordan Henderson has led from the front at Liverpool, Peter Crouch and Joe Cole believe he's finally moved out of Steven Gerrard's shadow, high praise for the captain! pic.twitter.com/WhIbxR75vB

In truth, there was only ever going to be one winner wasn’t there.

Gerrard was only 23 when he got the armband in 2003 and went on to become Liverpool’s driving force and inspiration over the next 12 years.

The midfielder would often step up when he was needed, most notably in the 2005 Champions League final and 2006 FA Cup final.

READ NEXT: Six of Rafa Benitez’s most forgettable signings at Liverpool

TRY A QUIZ: Can you name every Liverpool goalscorer in the PL under Klopp?