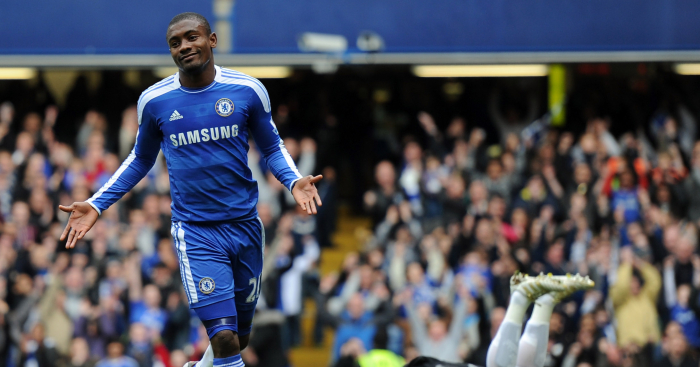 Players from the Eredivisie tend to endure mixed fortunes when they cross the channel to play in England, but that doesn’t stop Premier League clubs from continuing to shop there, least of all Chelsea…

Hakim Ziyech, joining from Ajax, will become the 10th player the London club have signed from the Netherlands’ top division and the most expensive one at that.

If he wants to be considered a success, he’ll need to fare better than most of the men that took the well-trodden path before him…

If you’re an Aussie, you’re probably aware that there was a footballer that played for Chelsea called David Mitchell. If not, your mind will probably go straight to that five-a-side scene from Peep Show.

Chelsea signed the striker from Feyenoord in 1988 for just over £200k. He’d go on to play just seven games for the club, scoring no goals and leaving for Newcastle in 1990.

A better-known flop. In 2004, Kezman had been scoring goals for fun in Holland: 105 in 122 games to be precise. Given how well Ruud van Nistelrooy, the man he replaced at PSV, was doing in England, the £7million deal seemed a good one.

It wasn’t. He never adapted to the more physical English game, scoring just seven goals in 41 games before leaving for Atletico Madrid. Still, the man himself actually referred to his stint at Stamford Bridge as the best time of his career, so at least someone enjoyed it.

When Van Ginkel joined Chelsea from Vitesse in 2013, many saw the young Dutchman as the heir apparent to Frank Lampard given his style of play. After a decent start to life in London, however, a torn ACL ruled him out for the season.

By the time he returned, he was way down the pecking order and joined the dreaded group of Chelsea loanees, leaving first for AC Milan before then spending time at Stoke and PSV. He looked to have revived his career at the latter, but knee surgery stunted his progress.

These days he’s back at Chelsea, stuck on the injury table. Lampard has said the midfielder has every chance of breaking into the first team once he’s fit, but we can’t see it ourselves.

Gronkjaer is a cult hero among the Chelsea fanbase for scoring what is known as the ‘billion-pound goal; against Liverpool, which secured Champions League football for the cash-strapped club and prompted Roman Abramovich to buy it.

Asides from this goal, though, the Dane’s time at Stamford Bridge wasn’t that great. In his 119 games, he scored just 11 goals and assisted 14, generally being an inconsistent and frustrating player.

But, to be fair, the £10million Chelsea paid Ajax for him was worth it for the Liverpool goal alone.

Signing a major nation’s first-choice goalkeeper for just over £2million is, at face value, a good deal, and in this case, it was. De Goey was a stalwart between the sticks for Chelsea in his first three seasons for the club, setting club records for the most appearances and clean sheets during a season in 1999-00.

However, his form dropped off after this and the Dutchman lost his place to Carlo Cudicini at the turn of the century. He made just three appearances in the next three years before being released and joining Stoke in 2003.

After seeing the young defender impress at Ajax, Chelsea moved quickly to snap Melchiot up on a free transfer in the summer of 1999. Injury struggles meant he made little impact in his first season, but after that, he never looked back.

In his next four seasons for the club, Melchiot went on to establish himself as the side’s first-choice right-back, seeing off competition from the likes of Albert Ferrer and Christian Panucci. When he left for Birmingham in 2004, he did so as a fan favourite at Stamford Bridge.

Kalou joined Chelsea in 2006 having been one of the Eredivisie’s most prolific goalscorers for Feyenoord. While he never managed to do the same in England, he turned out to be a worthwhile signing nonetheless.

While he spent most of his time at the club on the bench playing second fiddle to the likes of Didier Drogba and Fernando Torres, Kalou often showed up when the team needed him most, scoring winning goals in crucial games against Spurs and Benfica and converting the winning penalty in the 2009 FA Cup final.

When he left in 2012, he had played 254 games, scoring 60 goals, assisting 44 and winning eight trophies, including one Champions League and one Premier League title.

One of the lesser-known Eredivisie imports but undoubtedly one of the best. Monkou joined from Feyenoord in 1988 for just over £100k and went on to become one of Chelsea’s and the Premier League’s best defenders.

He joined the Blues towards the end of the 1988-89 season and helped the club secure the Second Division title. He then made a name for himself in their first season back in the top flight, playing a crucial role in their fifth-place finish and being selected as their Player of the Season for it.

He never quite recaptured that form in his next two seasons at the club but remained a crucial player nonetheless, playing 54 games at the heart of the Chelsea backline. He then left for Southampton where he stayed for seven years.

Robben joined Chelsea along with PSV team-mate Kezman in 2004 for a fee of around £16million, and it’s fair to say the Dutchman faired *slightly* better during his time at Stamford Bridge.

Injuries, which were all too common in the early years of his career, meant Robben had to wait until November for his debut, but he then made an instant impact, scoring his first goal against CSKA Moscow.

He went on to be named PFA Player of the Month, and by the end of his first season, he had seven goals and nine assists in 18 games and was nominated for the Young Player of the Year award.

Despite injury troubles, he remained a key player for Chelsea for two further seasons, playing a huge role in their second straight Premier League triumph in 2005-06 before his form the following season earned him a move to Real Madrid.