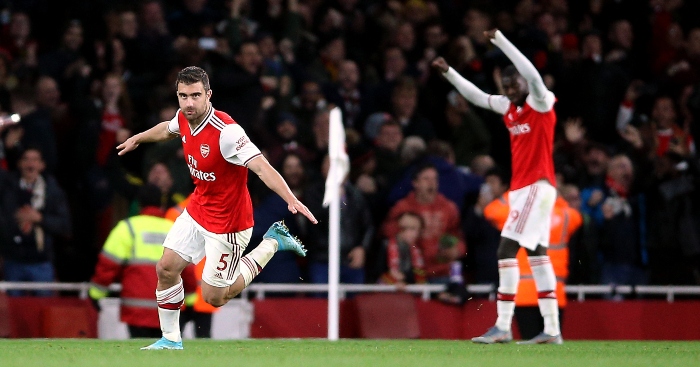 VAR has provided some of the main talking points this season in the Premier League – and it’s unlikely to stop anytime soon.

Note: The figures do not include VAR referrals that have upheld the officials’ original decisions.

Brighton’s first taste of VAR saw Leandro Trossard’s goal against West Ham disallowed in August, but they have fared better since with six goals scored against them subsequently being disallowed.

They were also awarded a penalty by VAR against Everton in October, while Jamie Vardy was forced to retake a penalty against the Seagulls the following month when encroachment was spotted. He scored it anyway, mind.

Glenn Murray’s originally ruled out goal against West Ham in February was also allowed to stand after a VAR review.

Palace benefited from three VAR decisions in October when Jordan Ayew’s late goal against West Ham was awarded after initially being given as offside, a penalty was awarded against Arsenal after Wilfried Zaha had been booked for diving and then Sokratis’ late goal was disallowed for the hosts.

The Eagles have had goals ruled out against Liverpool and Southampton although a Manchester City penalty was cancelled by VAR and Connor Wickham’s goal against Norwich was allowed to stand.

Just one VAR referral has gone against United, when Pierre-Emerick Aubameyang’s originally ruled out goal for Arsenal was allowed to stand.

The Red Devils have since seen Sadio Mane’s goal at Old Trafford and Roberto Firmino’s goal at Anfield ruled out by VAR.

United also had two penalties awarded at Norwich City – they contrived to miss them both – and then another penalty given against Manchester City.

Southampton have also had six goals against them ruled out by VAR, but Ryan Bertrand’s red card against Leicester went against them.

January was a tough month for the Saints as VAR reversed a decision to give them a penalty against Leicester due to an offside call in the build-up and it then awarded Wolves a penalty in the next game.

Dan Gosling and Dan Burn then benefited in exactly the same way against Chelsea and Brighton before Norwich’s Ben Godfrey was sent off for a foul on Callum Wilson.

West Ham’s Aaron Cresswell looked to have been sent off against Bournemouth but VAR downgraded the red card to yellow.

Aston Villa have had two goals disallowed against Burnley, while a penalty awarded to Chelsea was overturned after Callum Hudson-Odoi was deemed to have taken a dive.

The Clarets were then awarded a penalty of their own against Watford after a foul was spotted by VAR, but Sean Dyche’s team also had goals disallowed against Leicester and West Ham.

Wolves, Spurs and Burnley have all had goals disallowed against Leicester, while Ryan Bertrand was sent off for Southampton.

Kelechi Iheanacho also had a goal awarded against Everton after originally being given as offside, but the Foxes had a penalty cancelled in the same game.

Jamie Vardy was made to retake a penalty against Brighton for encroachment, albeit he still scored.

VAR cancelled a Southampton penalty in January but Jonny Evans then had a late goal ruled out for offside in the same game.

Then Wolves arrived at Anfield and saw Mane’s goal allowed to stand after the referee had whistled for an Adam Lallana handball, and then Pedro Neto’s goal ruled out for offside.

Just like Mane, Firmino then had a goal ruled out against Manchester United after Virgil van Dijk had fouled David De Gea in the build-up.

Roberto Firmino thought he had doubled Liverpool's lead, but it's ruled out after a foul on David de Gea in the build-up.

VAR has only been involved once in Newcastle’s games, with Jonjo Shelvey’s goal against Sheffield United given after initially being ruled out for offside.

Gabriel Jesus has seen two goals ruled out, against West Ham and Tottenham, although City were allowed to retake a penalty against the Hammers due to encroachment from Declan Rice, with Sergio Aguero converting from 12 yards.

Like Liverpool, City benefited from two decisions against Wolves, with a penalty awarded and then retaken after being missed when encroachment was spotted.

Sheffield United also had a goal disallowed for offside against City, but Pep Guardiola’s side did have a penalty given against them in the Manchester derby.

Spurs were left thanking VAR after Gabriel Jesus’ late winner for Manchester City was ruled out in August, while they saw decisions go both for (Ayoze Perez having a goal disallowed) and against (Serge Aurier’s effort suffering the same fate) them in the defeat at Leicester.

Sheffield United and West Ham both then had goals ruled out for offside against Spurs before the tables turned against Chelsea when the Blues were awarded a penalty and Son Heung-min was sent off.

Harry Kane then had a goal ruled out for offside against Brighton before Teemu Pukki suffered the same fate for Norwich against the north Londoners.

VAR then awarded Manchester City a penalty after Serge Aurier fouled Sergio Aguero, although Ilkay Gundogan did miss from the spot.

A brilliant bit of control from Teemu Pukki and the Finn thinks he's doubled Norwich's advantage but VAR intervenes and it's ruled out for offside.

Watford were awarded a penalty against Chelsea and saw Sadio Mane’s goal for Liverpool ruled out for offside.

However, the Hornets had a penalty given against them against Burnley and Christian Kabasele received a red card against Wolves.

VAR proved costly for Everton against Brighton as Michael Keane was deemed to have fouled Aaron Connolly, conceding a penalty, in the 3-2 defeat.

They then saw a penalty awarded to Leicester cancelled out by VAR before a Kelechi Iheanacho effort, originally ruled offside, was given as a 94th-minute winner.

The Toffees were relived when Phil Foden’s goal was ruled out for offside but the boot was on the other foot when Dominic Calvert-Lewin’s strike against Brighton was disallowed for handball.

Pierre-Emerick Aubameyang’s goal against Manchester United was initially disallowed for offside, only to be awarded after a VAR referral.

But the Gunners were left to rue the system against Crystal Palace as the visitors were awarded a penalty after Wilfried Zaha was initially adjudged to have dived before Sokratis had a late goal ruled out.

Aubameyang was then allowed to retake a missed penalty after encroachment was spotted against Norwich before the Gunners moved back into the red when David Luiz had a goal disallowed for offside against Brighton.

VAR cost Arsenal against Palace for a third time when Aubameyang was sent off for a foul on Max Meyer.

Villa have also had two goals ruled out against Burnley this season, although only one proved costly.

John McGinn’s disallowed goal against Burnley meant VIlla were held to a 2-2 draw in September, but they still managed to beat them 2-1 in January despite Jack Grealish having his goal ruled out.

The Villans were then awarded a penalty against Sheffield United, only for Jack Grealish to miss before Conor Hourihane had a goal disallowed against Brighton.

Kurt Zouma and Cesar Azpilicueta have both had goals ruled out by VAR, against Norwich and Liverpool respectively, while Callum Hudson-Odoi had a penalty overturned after being adjudged to have dived against Burnley and Gerard Deulofeu had a penalty for Watford awarded following a trip by Jorginho.

Bournemouth were also awarded a winning goal at Stamford Bridge that had originally been given as offside, but Frank Lampard’s side did benefit from VAR when West Ham had a goal ruled out for handball.

Chelsea were also given a penalty and then had Son Heung-min sent off against them when they won at Spurs just before Christmas.

Manchester City, Brighton and Burnley all had goals ruled out against West Ham, but Bournemouth, Crystal Palace and Brighton all had goals originally chalked off eventually given by VAR.

City were allowed to retake a missed penalty due to encroachment, which was subsequently converted by Sergio Aguero. But given that game ended 5-0, let’s not split hairs.

Declan Rice had a goal disallowed for offside against Spurs but Aaron Cresswell’s red card against Bournemouth was downgraded to a yellow card.

Michail Antonio saw goals ruled out for handball against Chelsea and Southampton before Robert Snodgrass also had a goal against Sheffield United disallowed for handball.

It’s even more remarkable how well Wolves are doing when you consider how much VAR has affected them.

Leander Dendoncker’s effort against Leicester in August and Raul Jimenez’s strike against Southampton in October were both ruled out, and then Wolves had four decisions go against them in the space of three days against Manchester City and Liverpool.

First City were awarded a penalty and then allowed to retake it after it was missed, and then Liverpool had a goal given after originally being ruled out for a handball before Pedro Neto’s goal for Wolves was then ruled out for offside.

VAR has been kinder to Wolves in 2020, sending off Watford’s Christian Kabasele and awarding them a penalty against Southampton.

"What is it an armpit that's offside, or a toe, or something like that?"

It's safe to say that Conor Coady is not a fan of VAR. #bbcfootball pic.twitter.com/HiiTPuZ215

Norwich benefited from their first taste of VAR when Kurt Zouma’s goal for Chelsea was ruled out, and they came out unscathed when Manchester United had two penalties awarded at Carrow Road following VAR referrals, only for Tim Krul to save them both.

Since then, however, Arsenal were allowed to retake a missed penalty following encroachment, Sheffield United’s Chris Basham had a red card rescinded, and then Teemu Pukki had a great goal against Spurs ruled out for a marginal offside.

Crystal Palace’s Connor Wickham had a goal awarded after it was originally ruled out for offside and Ben Godfrey was sent off for a foul on Bournemouth’s Callum Wilson following a VAR review.

Like Wolves, Sheffield United are impressing in spite of VAR.

The Blades have had goals against Southampton, Spurs, Brighton (2) and Manchester City ruled out while Joel Ward’s red card was rescinded. Newcastle also saw a goal originally given as offside subsequently allowed to stand.

They have only had two decisions go in their favour, Chris Basham’s red card against Norwich being chalked off and Robert Snodgrass’ goal for West Ham being ruled out for handball.