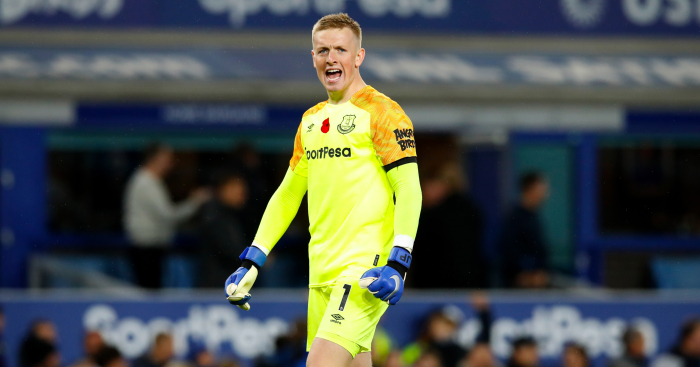 According to the old cliché, you have to be mad to be a goalkeeper. But how do the PL’s current crop fare in that regard?

From René Higuita to Jens Lehmann, goalkeepers have frequently proven their ability to surprise, confound and generally get a bit weird.

And while we like to think of England as a sober place of moderation and queuing, the Premier League is no exception to rule. We’ve got plenty of oddball shotstoppers, and we’d be much worse off without them.

So who amongst the current lot is most likely to attempt a Cruyff turn, abuse his centre-backs or just plain eat his gloves or something?

The maddest thing Ben Foster has done this season is put Bernd Leno in his Fantasy League team.

We’ll take the point, scrappy game. Fair play to all the fans turning up in that weather! 🥶 ⛄️ ❄️ @WatfordFC pic.twitter.com/UC9KE9pK9c

“Everyone needed a kick up the arse,” McCarthy said in December, thus fulfilling Southampton’s madness quota for the season.

If madness means saving penalties, becoming your country’s first Premier League footballer and generally being the bedrock of your otherwise quite bad football team, then lock Neil Etheridge up in a padded room and throw away the key.

He’s otherwise on the level.

Four places madder than Ben Foster, but only because he has an umlaut in his name. And that says a lot about Ben Foster.

He explicitly denied being a “mind reader” after saving some penalties at the Asian Cup, but there’s no smoke without fire.

Tom Heaton seems like a normal guy. But then again, Burnley is a weird club and Sean Dyche a spectacularly weird manager.

In fact, after regaining his place in the first team earlier this year, Heaton did go a bit funny.

“My wife said I was singing and dancing washing the dishes on the Friday night and that it was great to have the real me back,” he told the Mail.

That’s the real Tom Heaton then.

Would have been the nailed-on number 20 before the World Cup, so props to Hugo for climbing.

It’s just a case of somebody ‘having it all’ and not knowing what to do with themselves, isn’t it? One minute you’re shimmying past Mario Mandzukic in the final; next you’re putting Kieran Trippier’s toenail clippings in Eric Dier’s lunch.

Barmy and getting worse.

One of the quietly weird ones.

“Whenever he puts the heavy metal on [in the dressing room], a few people are looking around thinking, ‘Alright, we need to get out of here.'”

Hangs out with Jonjo Shelvey.

According to Jamie Vardy, Leicester’s keeper owns more pairs of boots than any outfield player, which is bloody suspicious.

This is more a case of ‘I’m mad me!’ attention seeking, but Rui Patricio does, at the end of the day, wear #11 on his shirt.

If you asked Bernd Leno to hold your pint he’d try and punch it clear.

Do not trust him.

You can show me all the statistics you want. You can say he’s one of the most dependable keepers around, having excelled at a series of defensively frail clubs, and that he has the fourth best save percentage in the league.

Say whatever you damn well want, but Fabianski played for Arsenal and is therefore, like Leno, not to be trusted.

Ederson looks about 14 and has a smiley face tattooed behind his ear. Very ‘goalkeeper’.

In truth, who saw any of this coming?

I thought Kepa was a quiet and conscientious young man, but he is in fact a disciple of Hugo Lloris, actively trying to shrug off a reputation for meekness in the most upsetting way possible.

Definitely better than Loris Karius but probably madder too.

Eddie Howe dropped Asmir Begovic just so I could make this list, because Artur Boruc is daft as a brush and we all love him for it.

A reminder that his belly button is a monkey’s arsehole.

Where do you even start?

Never mind goalkeepers: Jordan Pickford, England’s number one, might be the maddest person in the country.

He spends the whole game telling everyone to fuck off. His kicks are out of this world. He did that thing with Divock Origi.

Pickford is the obvious winner.