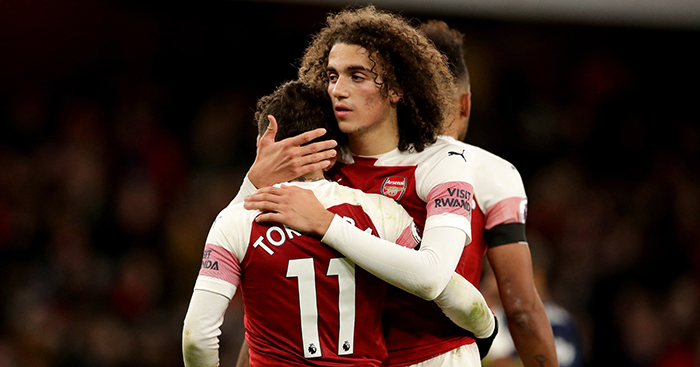 Arsene Wenger was often criticised for his record in the transfer market in his latter years in charge of Arsenal – but how have the Gunners fared in that regard since he left Emirates Stadium?

Arsenal have spent more than £200million since Wenger’s departure at the end of the 2017-18 season, including a club-record £72million on Nicolas Pepe alone.

Ordered from worst to best, we’ve ranked their nine permanent signings so far, excluding William Saliba who is yet to play for the club, plus loanees Denis Suarez and Pablo Mari.

Lichsteiner’s experience would no doubt have been hailed as important had Arsenal achieved their aim of Champions League qualification, but they didn’t so instead he ended up looking like a fairly pointless signing.

He was never expected to play a great deal of games, but he was virtually frozen out in the last couple of months of the season and didn’t play a single minute in the Europa League from the last-16 stage onwards.

After leaving, the Switzerland full-back said Unai Emery maybe “struggled with the top players,” adding: “With the big players, he hasn’t maybe the relationship to bring more out [of them] and get the top performances.”

Sokratis may have been bought in by post-Wenger Arsenal, but he’s exactly the sort of signing the Frenchman was often criticised of making: he’s just…fine.

He’s old-school in his approach to defending, which is meant as a compliment, but he’s not exactly Martin Keown. He’s OK, but he never really seemed like the answer when he signed as a 30-year-old. But that run against Leeds was fun.

Pepe would not be the first attacking player to underwhelm in his first season in the Premier League only to come to life in his second so there’s certainly time yet for him to prove his worth in England.

Indeed, he has gradually improved as his first season has gone, contributing three of his six league assists in the space of two games in late February.

We very much enjoy watching him dribble, but for now, as a £72million signing, he can’t be placed any higher on this list.

NICOLAS PEPE HAS DONE IT AGAIN! 🔥

He rips a free-kick into the top corner in added time to snatch all three points!

If you sign David Luiz, you get David Luiz. And everyone will have their opinion on whether the bad outweighs the daft.

But forget the mad moments on the pitch, the weirdest thing about Luiz at Arsenal is the recent revelation that he only actually signed a one-year contract when he joined (for a not-insignificant £7million) from Chelsea last summer, with a club-held ‘option’ to extended by a further 12 months yet to be activated at the time of writing.

With the Brazilian on a bumper wage and William Saliba on his way, the Gunners may decide to cut their losses.

Injuries have prevented Tierney from making much of an impact so far, but the signs are there that he can be a top Premier League left-back, with his final ball in particular standing out. And at 22 on a five-year contract, Arsenal look set for the foreseeable future.

Mikel Arteta summed it up pretty well: “His attitude, his commitment, his willingness it’s incredible. I think he’s going to bring something special to us.”

Like several players on this list, Leno’s performances have been a mixed bag. He’s had some incredible moments interspersed by some bad ones, but there’s certainly a net positive.

He was a signing that was required at the time to take over from the deteriorating Petr Cech; whether he himself will need improving on if Arsenal are to start challenging again remains to be seen.

The first of two bastard midfielders on our list, Torreira has come in for stick at times but has been key to many of Arsenal’s best performances when used right and at his best.

Torreira was not happy playing as a box-to-box midfielder under Emery according to his mouthy agent, but Arteta will hope he can make a better job of keeping the Uruguayan happy and his agent quiet.

Guendouzi is undoubtedly inconsistent, but at 21 that’s not too worrying. The promise is clearly there.

Also, as a relatively low-cost, low-key arrival from Lorient in the French second division, he represents the kind of signing Wenger would have been proud of when he had the Midas touch.

But perhaps above all else, the best thing about Guendouzi is that he’s a brilliant shithouse. And we love him for it.

Perhaps we’re getting carried away putting Martinelli at No.1 with 14 appearances and three goals in the Premier League to his name, but it’s hard not to get carried away about him.

He’s completely fearless, tremendously exciting to watch and clearly knows where the net is. Jurgen Klopp called him the “talent of the century”.

Yes, it’s early, but the 18-year-old is going to be one hell of a player if he carries on the way he’s going.