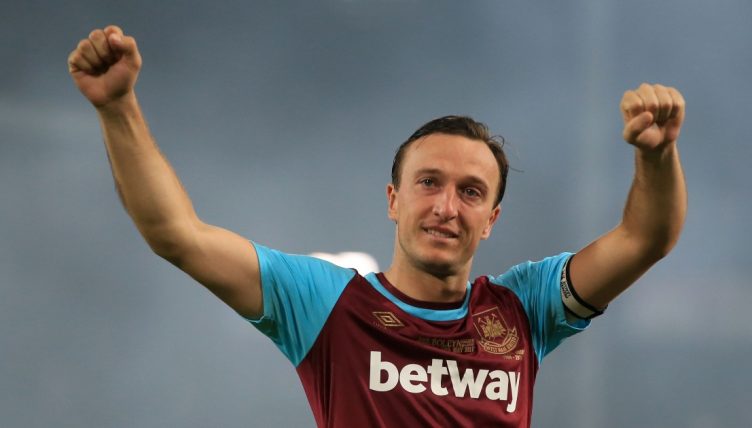 West Ham have seen plenty of ups and downs over the past three decades and that rollercoaster ride is reflected in their list of captains.

From solid professionals to enigmatic attackers, West Ham have been led by a variety of individuals down the years as they’ve looked to escape their own mediocrity.

We’ve ranked every West Ham club captain during the Premier League era from least to most effective.

A fine defender in his prime but Upson was so anonymous as West Ham captain that everybody assumed Scott Parker led the team instead.

His two seasons as skipper saw the Hammers finish 17th and 20th, while Upson was an unused substitute on the day relegation was confirmed at Wigan.

Hardly the next Billy Bonds, then.

Di Canio, rightly, is a cult hero for a generation of West Ham fans. Both bonkers and brilliant in equal measure, Di Canio was one of those wonderful footballers that were worth the admission fee alone.

But he wasn’t the right captain for a young squad. After taking over as skipper in 2001, Di Canio had numerous run-ins with Glenn Roeder and almost left for Manchester United at the start of 2002.

What most fans dismissed as Paolo being Paolo could be interpreted as a self-centred streak that damaged the team and started the slide towards relegation in 2003.

Matters came to a head when Di Canio stormed off after being subbed at West Brom and Roeder ostracised him from the team.

The one that got away.

As West Ham faced the drop, despite a team full of internationals, Roeder gave Cole the captaincy in order to reinvigorate the side.

It nearly worked. With Cole driving the team forward from midfield, West Ham were in Champions League form over the second half of the 2002-03 season and Cole deservedly won the Hammer of the Year award.

But West Ham still went down and Cole was never going to stay in Division One. His move to Chelsea was the heartbreaking consequence of West Ham’s incompetence.

Dailly was only captain for a season where West Ham lost in the play-off final but he did score a goal after being hit in the penis.

⚒️ – Happy Birthday, Christian Dailly. Here's him taking one for the team while scoring the winner against Ipswich in the play-off semifinal.

Dunno why Pardew is in full kit, there. #whufcpic.twitter.com/0IJuW3tqPJ

Bishop was a stylish and elegant central midfielder that served West Ham well during his nine years at Upton Park.

At his best, Bishop was a passing midfielder with few peers who chipped in with the occasional spectacular goal and led West Ham to promotion in 1993.

He was also captain when West Ham yo-yoed between the First and Second Divisions (ask your Dads) in the early 1990s and faced constant questions about his sexuality.

Neill was the de-facto leader as West Ham escaped relegation in 2007, providing the steeliness sorely lacking earlier that season.

He was appointed club captain after Reo-Coker’s departure and performed a solid enough job under both Alan Curbishley and Gianfranco Zola before leaving on a free in 2009.

For a time, Reo-Coker was the perfect leader for Alan Pardew’s West Ham. Brash, British and full of confidence, Reo-Coker lifted the Championship play-off trophy in 2005 and led West Ham to the FA Cup final a year later.

Then the wheels came off. Form dipped, Pardew was sacked and the midfielder became the public face of what successor Alan Curbishley called the ‘Baby Bentley brigade’.

This image was hardly helped when, after scoring the winner against Manchester United, Reo-Coker cupped his ears to the celebrating West Ham fans.

His contribution to the Great Escape was overshadowed by others and it was no surprise when the England U21 international joined Aston Villa that summer.

Reo-Coker was successful, but not particularly loved by West Ham supporters.

Months after making the move from second-tier Manchester City in 1997, Lomas was appointed captain of Redknapp’s West Ham and remained in the role for four years.

And the Hammers became an established presence in the top half of the Premier League for the first time in a generation, playing some brilliant attacking football along the way.

“When I came to West Ham, we had a good team and a dressing room full of great characters,” Lomas told the club’s official website. “I was very proud to be chosen as club captain and yes, you do try and lead by example on the pitch.

“We had lively characters like John Moncur, Neil Ruddock and, later, Ian Wright – all wanted to go out there and give it a go.

“We played good football and went out to do our jobs as best we could on the pitch, but had a laugh together as well.”

The legendary Dicks was only captain for a single season but helped West Ham avoid relegation in 1997 with his tough-tackling and underrated ability as a footballer.

The full-back won Hammer of the Year on four separate occasions and few have won the hearts of demanding West Ham support like the Bristolian managed.

Plus, he hit one of the greatest penalties of all time during the 4-3 win over Tottenham. No further questions, Your Honour.

24 years ago today West Ham, in the bottom three and without a win since Xmas, are 3-3 with Spurs when they win a late penalty.

The match, and the fate of their season, depends on Julian Dicks.

Nerves? Stick ‘em up your bollocks…pic.twitter.com/3CPvjHKZnP

West Ham had to fight hard to establish themselves in the Premier League during the 1990s.

Lacking the resources of their rivals, both Bonds and Redknapp had to rely on a tight-knit group that would eek out results when most needed and nobody personified that more than Potts.

The right-back, captain between 1993 and 1996, was the backbone of the West Ham defence and he was duly rewarded with two Hammer of the Year awards and two runner up trophies to boot.

West Ham have been blessed with some fine players down the years but few served with the distinction that Potts managed during his 505 club appearances.

Sam Allardyce walked into Upton Park in the summer of 2011, with West Ham smarting from relegation, took one look around and decided to ring Nolan. He needed him.

It was a masterstroke. The midfielder scored 23 goals in his first two seasons as the club won promotion and stabilised back in the Premier League.

But, more than that, Nolan gave West Ham its backbone back. Sure, there were better teams around but they’d rarely surrender in the manner all West Ham fans had become accustomed to seeing from their side.

He stayed slightly too long but, like a round of antibiotics, Nolan was exactly what West Ham needed at the time.

Was there any other choice for our number one slot than Mr West Ham himself?

After making his debut in 2004, Noble truly established himself as a first-teamer during the Great Escape of 2007 and has only just given up his place in the starting XI.

Noble took over as captain after Nolan’s departure and his form in the 2015-16 season led to cries for the midfielder to be picked in Roy Hodgson’s England squad.

Perhaps Noble was slightly under international class but he has been a tremendous servant to the club and a much-underrated player both by West Ham fans and the wider footballing public.

There remains a possibility the London Stadium will dissolve into dust when Noble leaves in May 2022.

GOAL OF 2018!! Scored by Mr West Ham, Mark Noble. So underrated this goal. If Salah or Kane scored this then we would never hear the end of it. My captain ⚒ pic.twitter.com/FNCIDryyF7