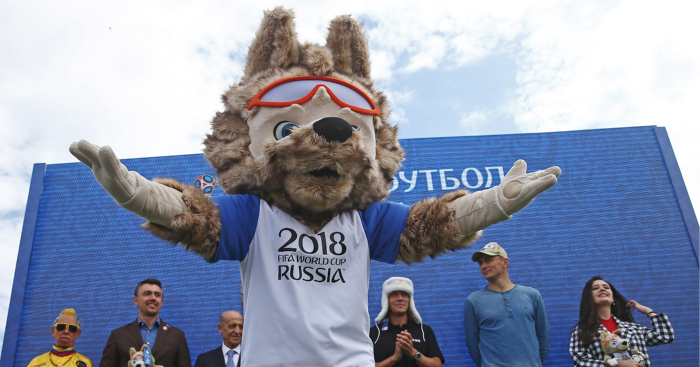 Some football mascots can be iconic – think Arsenal‘s Gunnersaurus or Manchester United‘s Fred the Red – but some, well not so much.

The history of World Cup mascots stretches back to England in 1966, and each competition since has had a different representation in the shape of an animal, a human or otherwise.

We’ve taken a look at all 14 World Cup mascots, from 1966 right up to this summer’s tournament in Russia, and decided which are the cream of the crop, and which are far from it.

Everything about Goleo – and his sidekick Pille, a ball with a face – is extremely unnerving.

Yes, it is supposed to be a lion. And yes, we do think it definitely needs to put some pants on.

Germany's WC mascots in 2006. Goleo and Pille. A lion without pants and a speaking football. pic.twitter.com/i2Zxi7bIOP

Ato, Kaz and Nik as they were individually known, The Spheriks were supposedly computer-generated images that represented the future.

Sixteen years later, maybe we’re not quite far enough into the future just yet…

2002 FIFA World Cup had so many memories. Remember The Spheriks? pic.twitter.com/0QquETa7DP

Two young boys Tip and Tap were supposed to represent a unified Germany – 16 years before the country’s actual Unification Day.

They also shared a t-shirt, which struck as very bizarre, with the WM standing for Weltmeisterschaft, the German for World Cup, of course.

Tip and Tap – The boys were the official mascots of the 1974 @FIFAWorldCup in West Germany. They wearing t-shirt with "WM" and 74 written on it. "WM" represents "Weltmeisterschaft" and 74 represents the year 1974. @DFB @LaczyNasPilka #worldcup #worldcup2018 @KNVB @CBF_Futebol pic.twitter.com/aXne1B4jqB

It’s not a great sign when you look at the pictures and have absolutely no clue what it is.

The name, Zabivaka, translates to Goalscorer, and it is supposed to be a wolf. Send us a postcard with any idea what the goggles are for please.

@danielhowell
should we maybe bring you some zabivaka merch to the shows in moscow pic.twitter.com/fhQisbzn6P

Plain and simple, Gauchito was a young boy in an Argentina kit with a hat, neckerchief and whip typical of gauchos.

A national symbol in Argentina, a gaucho is a type of horseman in folklore, believed to be strong, brave and unruly. He’s also wearing some nice Puma Kings.

Gauchito, the Mascot for the World Cup held in Argentina back in 1978#Argentina #WorldCup #Mascots pic.twitter.com/cGL3ruzGEf

Another not too over-the-top effort, young boy Juanito is said to embody the typical Mexican football fan.

His oversized hat and boots make him instantly recognisable and likeable, but it is basically just a boy.

Designed by the Warner Bros animation department, Striker is a common American dog dressed as a fan.

One of the first actual embodied mascots to grace the World Cup, and does actually look relatively like a dog, proving technology hasn’t come that far in 24 years.

and to depress US soccer fans further, Striker, the mascot of the stateside 1994 World Cup, is definitely dead by now pic.twitter.com/f3panlSj0x

It’s bizarre, but that might just be why we like it; Fuleco is an endangered three-banded armadillo found only in Brazil.

Made to represent Brazil’s biodiversity, the name is a mash up of ‘futebol’ and ‘ecologia’ of which you can guess the meanings.

It was Cafu! Look at us together! pic.twitter.com/fxdcRVZUTq

Zakumi the leopard arrived in 2010 and was a decent effort to represent the first World Cup held in Africa.

The name is particularly well thought out, with ZA meaning South Africa and ‘kumi’ being the word for 10 in many African languages.

In 1982, Spain whacked an orange in their national kit, and named it ‘little orange’. Simple but effective.

One of the first ever mascots of a major sporting event, World Cup Willie was devised by Enid Blyton’s illustrator Reg Hoye.

The Lion – as seen on England’s crest – wore a Union Flag with ‘World Cup’ across the front, and appeared in a series of comics around the tournament.

The 1️⃣9️⃣6️⃣6️⃣ #England #WorldCup mascot, Willie – the lion, was drawn by Reg Hoye, who also illustrated a few of Enid Blyton’s children’s books. He made Willie based on his son Leo#DidYouKnow #history #football #Russia2018 #RussianRoulette #FootTheBall #fifa pic.twitter.com/hMC1zL3RO8

This caused much debate in the office. Young Joe, who wasn’t even born in 1990, declared this as ‘disappointingly uninventive’ and wanted it ranked at No.12

Our Editor, for whom Italia 90 was his first World Cup, considered instant dismissal but settled for a much loftier ranking for good ol’ Ciao.

It does raise an interesting question, though: is Ciao actually a brilliant mascot or do those of us of a certain age love it just because of nostalgia? it is, after all, just a stick figure with a football as a head.

1990 World cup Mascot in Italy was 'Ciao', it was a tricoloured stick figurine with a football for a head #design pic.twitter.com/t5YH1ShRxE

This is just downright bizarre, but we are all over it.

After Juanito in 1970, Mexico upped their game when they got their second World Cup, dressing a pepper in a sombrero and a moustache.

It’s name comes from ‘picante’ which is Spanish for spicy, and is also supposed to be a pun on PK, standing for penalty kick.

Pique caused a lot of controversy in his homeland due to its stereotyping of Mexican culture.

The official mascot of the 1986 World Cup in Mexico was Pique, a jalapeño pepper. pic.twitter.com/E5Wm0L4i8d

And now we come to the best of the bunch.

Footix is an iconic mascot for any football fan, representing the 1998 France World Cup which the home nation won.

He is a cockerel, which is a national symbol of France, while he is also donned in the team’s colours of mostly blue with a red trim.

To add to the beauty, Footix’s ‘daughter’ Ettie, a young chick, will be the mascot for the 2019 Women’s World Cup in France.

Ettie is the official mascot of the 2019 FIFA Women's World Cup in France🇫🇷
She’s also the daughter of #WorldCup France 1998 mascot Footix!#FIFAWWC pic.twitter.com/nitkzxFP0Q