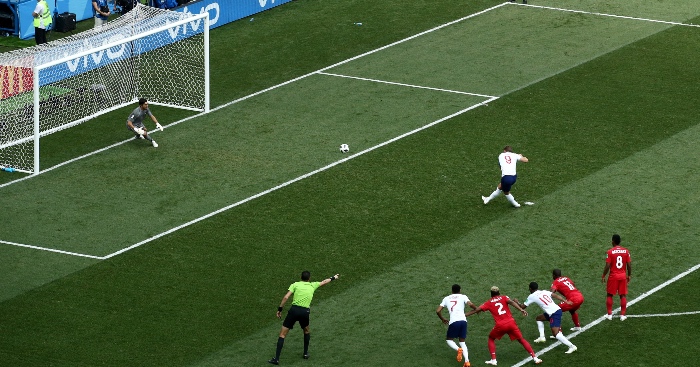 Tottenham, Liverpool and Everton players all converted penalties during the group stages at this summer’s World Cup – but which have been the best?

Thanks to the lovely little thing known as VAR, 24 penalties have already been awarded, blowing Italia 90’s record of 18 penalties in a single tournament out of the water.

As neutrals, we all love a good penalty. Less so when it goes against our own team. What else left to do, then, other than rank every penalty to be taken in Russia so far this summer.

So bad, he went off at half-time crying. Poor lad.

It’s really not much better, is it? Still, it’s not last just because it was a centimetre lower.

It wasn’t in the corner, wasn’t even really in the middle. Class footage, though, by the way.

ALIREZA BEIRANVAND 🔥 this guy was a homeless in Tehran, after escaping his nomad family, now stops a Ronaldo penalty. In the WORLD CUP! #IRN pic.twitter.com/Nt3jD3VO7U

The two GOATs with terrible penalties back to back. Get us out of this nightmare.

PENALTY MISSED! Messi steps up and looks to curl the penalty into the corner but Hannes springs to his right and makes a cracking save pic.twitter.com/gdbCMZ1G7E

It was tempting to put this ahead of some of the scored penalties. Some save from the ol’ lad, that.

Age ain’t nothing but a number! At 45, record-breaker Essam Elhadary saves a penalty for Egypt against Saudi Arabia.#gkunion #WorldCup⁠ ⁠pic.twitter.com/F73w541g7c

It feels cruel to laugh. This would have made Bryan Ruiz Costa Rica’s all time leading goalscorer in World Cup competitions. Sadly, it goes down as an own goal.

GOAL! Costa Rica draw level in the closing stages through a penalty but it's a Yann Sommer own goal, with the ball finding its way in via the unfortunate keeper's back pic.twitter.com/qnfy23HCU4

Completely unbiased having Tunisia here, but it’s not fully in the corner and Pickford gets a touch.

A penalty scored by Sassi for Tunisia making it 1-1 at 35 minutes pic.twitter.com/ZEHDybuUXg

The old ‘pass down the middle’. Just paid off, Shinji.

The first save must have taken it out of the 45-year-old. He’d had enough before this ball was struck.

GOAALLL! Saudi Arabia get back on level terms, Alfaraj burying the penalty to make it 1-1 against Egypt after a lengthy VAR review.#WorldCup #EGY #KSAEGY #KSA pic.twitter.com/rD1NFPDS2V

His second penalty of the tournament put in the exact same spot as the first. Kasper dives a bit early.

GOAL! After a VAR review for a Poulsen handball is given, Jedinak cooly slots home the penalty to get Australia back on level terms pic.twitter.com/toWvQdWgJD

A mirror image of the Denmark penalty. But we’re big fans of the ball getting stuck in the top of the netting.

JEDINAK (AUSTRALIA) SUCCESSFULLY CONVERTS THE PENALTY
He did in the first game and he has done it again. Schmeichel is sent the wrong way and Australia draw level this after Yurary was penalised for a handball after a VAR review#RussiaInLagos #WorldCup #KweseFreeSportsNg #DENAUS pic.twitter.com/auUYmr8GN9

Another wait for the keeper and pass it the other way penalty, but slightly more convincing than Shinji’s.

GOAALLL! Carlos Vela scores the penalty for Mexico after a Korea Republic handball

Slightly better than the one against Iran, Cristiano. Fair f*cks for laughing at your own club team-mate afterwards, too.

Cristiano Ronaldo stole the show with a spectacular hat-trick to ensure that Portugal and Spain shared the spoils in Match 3 of the FIFA #WorldCup. pic.twitter.com/LLG6wdG4DB

One for our Swedish Traders 🇸🇪

Not a bad pen at all. Not having that run up, though.

He actually hit the roof of the net. After his miss the first time around, he’s got some b*llocks – we’ll give him that.

Kissed the corner, you’re not stopping that.

MODRIĆ seals a double for Croatia with a brilliantly taken penalty kick after a foul in the box on Mandzukic by Troost-Ekong#1045SPORTS pic.twitter.com/kJQ7hy7IQE https://t.co/8qaCkCvQqw

Puts the keeper on his backside before slotting it home. Love that.

Side netting. Take the L, Australia.

Have you ever seen a man look less arsed about a pressure penalty than this? Decent celebration, too.

We really tried to find a difference between the next two, but who cares? England have a man that knows how to take a penalty. Imagine!

If you look up the definition of ‘top bin’ in the dictionary, you’ll now find this.