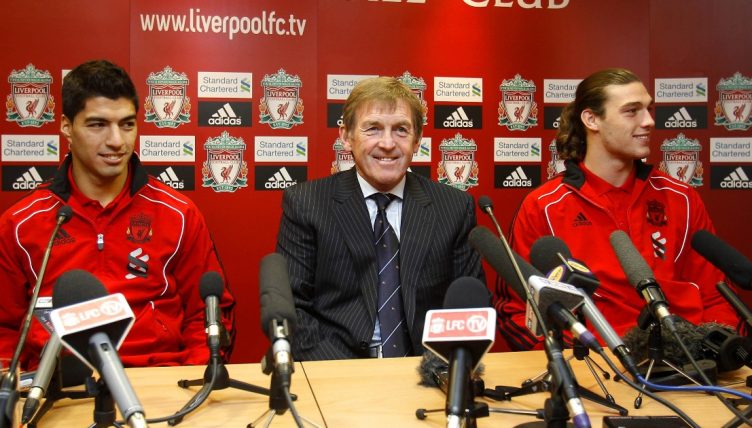 King Kenny Dalglish returned to Liverpool as manager in 2011 during a very strange time for the club.

Dalglish took back the reigns as a caretaker after Roy Hodgson was sacked midway through the 2011-12 season but was then given the job on a permanent basis in the summer only for the Reds to finish eighth in 2012-13.

That definitely wasn’t only his fault, of course, and they did win the League Cup and make the League Cup final, but some of the signings made during Dalglish’s time in charge badly flopped. Here, we’ve ranked all 11 of them from worst to best.

It’s a testament to how hyperinflated the transfer market has become since 2011 that £35million doesn’t seem like that much anymore. Fred, Granit Xhaka and Eliaquim Mangala have all made Premier League transfers for considerably more since then.

But back then, midway through the 2010-11 season, £35million to sign Andy Carroll from Newcastle was a true ‘world’s gone mad’ moment.

The Reds opted to use most of the funds they’d received from Chelsea for Fernando Torres on the big ponytailed centre-forward, who was forging a reputation as a promising young player after helping his boyhood club Newcastle get promoted in 2010 and impressing in the first few months of their return to the Premier League.

Needless to say, it’s a gamble that didn’t pay off. He scored just six goals in 44 Premier League appearances for Liverpool, having scored 11 in 19 for Newcastle.

At least he did this.

Morning, it’s eight years since this goal from Andy Carroll against Everton at Wembley in the FA Cup semi-final

Adam was brilliant at Blackpool and could certainly pick a pass, but a Liverpool player he was not.

At least he only cost £5million.

This was the kind of signing that can go one of two ways.

On the one hand, players like James Milner and Gareth Barry have proven themselves not just as steady English professionals but as players that could make the step up to a side with title ambitions after years of doing a job in the Premier League.

On the other hand, some steady English professionals were just playing at the right level all along. And Downing probably was at Middlesbrough and Aston Villa.

The winger scored three goals and provided seven assists in 40 Premier League appearances for the Reds and was promptly moved on to West Ham.

Joining as a teenager from Sporting Lisbon’s academy in 2012, unfortunately for Liverpool they didn’t get their own answer to Cristiano Ronaldo.

Although the winger showed plenty of early promise, being named Liverpool Academy Player of the Year in the 2014-15 season, his senior career at Liverpool didn’t amount to a great deal, making just two Premier League appearances.

Dalglish carried the torch for Rafael Benitez’s proud tradition of signing goalkeepers that barely played for the club.

Doni, once a Brazil international, joined Liverpool on a free transfer in 2011. But he couldn’t displace Pepe Reina, and his Liverpool career amounted to four appearances in total.

Team-mates with Luis Suarez in the Uruguayan national team, Coates failed to really make an impact at Anfield. Hampered by a knee injury, he made just seven Premier League appearances in his first season, which was the most he ever made.

He only cost about £7million, but Liverpool still had to take a hit on him when they sold him to Sunderland after four years.

The left-back was a good servant for Newcastle United, and played a big role in their promotion to the Premier League in 2010, subsequently playing well as they established themselves back in the top flight.

But Liverpool never really saw the best of him, and his most memorable outing for the club was on his return to St James Park in 2012. Newcastle welcomed Enrique and Carroll back with a 2-0 win, and the Spaniard was forced to go in net for the final 10 minutes after Reina’s dismissal.

To rub salt into the wounds, Alan Pardew’s Magpies finished three places and 13 points ahead of Liverpool that season.

On this day in 2012, @Jesanchez3 scored his debut goal for the Reds 🔴 pic.twitter.com/SApnFEjSL1

Danny Ward spent six years on Liverpool’s books but only made three appearances for the club.

But if nothing else, he proved to be a great bit of business. The keeper was signed for just £100,000 from Wrexham in 2012, impressed out on loan during Huddersfield’s promotion to the Premier League, and has since been sold for £12million to Leicester City.

He might actually play for the Foxes now, following Kasper Schmeichel’s shock departure to Nice.

The Welshman was reportedly a disruptive influence in his previous one-year stint at the club, which included attacking John Arne-Riise with a golf club, before being sold to West Ham in 2007.

Four years later he was back for another season before returning to boyhood club Cardiff City to see out the final years of his career.

He was a peripheral squad player during his second stint, but he made an impact as Liverpool won the League Cup and made it to the FA Cup final.

The Sunderland academy graduate has received plenty of criticism, both for Liverpool and England, since he signed in 2011.

Liverpool might have wasted 70% of what they sold Fernando Torres for on Carroll, but that January they also brought in Suarez, who more than made up for El Nino’s departure.

His time in Merseyside was marred by controversy and he only won the League Cup at the club, but he was a one-man wrecking ball and nearly single-handedly ended their wait for a Premier League title in 2013-14, scoring 31 goals in 33 appearances.

After three and a half years, Liverpool sold Suarez to Barcelona reported fee of approximately £75million. That’s more than three times what they’d originally bought him for.

He since scored 198 goals in 283 appearances for La Blaugrana, winning the Champions League and four La Liga titles – before going to Atletico and adding another league title for good measure. Arguably the best striker of the 2010s, Liverpool saw him at his very best.

The last 7 players Liverpool have signed from the Football League

Can you name Liverpool’s XI from Lucas Leiva’s debut in 2007?