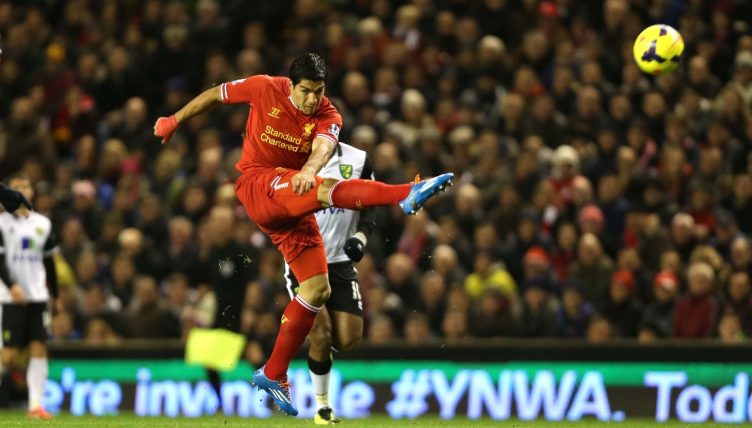 Goals, bans and bites – Luis Suarez brought plenty to the Premier League during his time with Liverpool. But there was one thing he enjoyed doing more than anything else: tormenting Norwich City.

Over the course of six league appearances against the Canaries, the Uruguayan notched 12 goals – including three hat-tricks – which doubtless left goalkeeper John Ruddy waking up in cold sweats for years to come.

Some of the goals are good, others are great, and a few are just downright genius. But how do they stack up against each other?

Despite being the ‘worst’ goal on this list, Suarez’s finish is very smart indeed after some great movement.

Weak foot? What weak foot? This is Suarez’s first goal against Norwich, and it’s dispatched with the minimum of fuss.

It’s all made to look so easy.

After some movement which turns defender Michael Turner into Swiss Cheese, the delicate side-footed finish is delightful.

Suarez’s last-ever goal against Norwich – you can open your eyes again, John…

There are few more aesthetically pleasing goals than a far-post curler. Lovely.

No, this is absolutely not a scuff!

The close control is good; the near post finish through two defenders and goalkeeper is pure class.

This starts with a bit of typical Suarez tenacity to win a 50-50 in the build-up to this goal.

But the finish, my word, is devastatingly effective from a man at the very top of his game.

Football is a simple game, isn’t it?

We have ranked this goal sixth primarily for a majestic yet simple dummy from Daniel Sturridge, which proceeds to cut open the entire Norwich team.

Of course, Suarez does the rest, firing across Mark Bunn making an unfortunate cameo in goal.

Things are getting really good now.

It is all a bit slapstick at the back from Norwich, and it’s our friend Michael Turner again who gives the ball away before being promptly nutmegged by Suarez.

But it’s the pure arrogance of the finish that puts this goal in the top five.

Who doesn’t love a direct free-kick being planted over the wall and into the corner?

Feeling sorry for Ruddy yet? You will after the next three…

This is not a typo – this goal is only ranked THREE!

The ever-so-brief look up on the halfway line is all Suarez needs, and the lob is executed to absolute perfection.

Does it rival the best long-range goals in history? Not quite. But it’s still worthy of the podium here.

An individual piece of brilliance which started with Suarez being surrounded by four defenders. The man defies belief.

It does not get much better than this. This is mesmerising. This is audacity. This is Luis Suarez – and he has single-handedly cleaned us out of superlatives.

The most remarkable part of this list is that three of the top four goals are from the same match!

He may have been controversial, but Luis Suarez never failed to light up the Premier League.

TRY A QUIZ: Can you name every player to score a Premier League hat-trick for Liverpool?