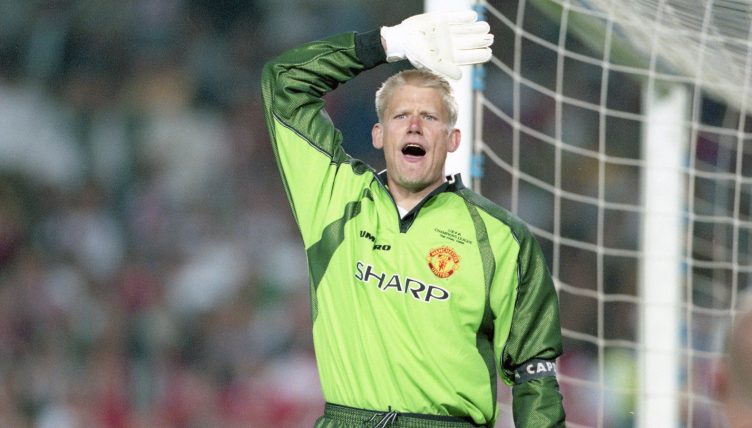 Manchester United have had some excellent goalkeepers down the years, but it’s certainly not always been that way for them during the Premier League era.

Beyond the reliability of Peter Schmeichel, Edwin Van der Sar and David de Gea, United have not always had a safe pair of hands between the sticks, while they’ve had a number of second and third-choice options don the gloves over the years.

And United are reportedly on the verge of signing Newcastle United goalkeeper Martin Dubravka to provide back-up for De Gea.

So we’ve ranked all 23 goalkeepers to make a Premier League appearance for the club. No points for guessing who’s bottom…

A name synonymous with comedy goalkeeping, the Italian was first called into action in the 1999-2000 season when both Mark Bosnich and Raimond van der Gouw were injured.

He flapped at a free-kick to concede in his league debut against Liverpool but recovered to make a number of important saves in a 3-2 win and was named man of the match.

However, he would permanently leave his reputation in tatters when he allowed a weak Matt Le Tissier shot to roll through his legs in a 3-3 draw against Southampton, arguably the most notorious howler in Premier League history.

He then conceded five against Chelsea in his fourth and final league appearance, Manchester United’s first league defeat in almost a year.

… and poor Massimo Taibi forgets how to use his arms and legs.

The reactions behind the goal say it all. Sometimes life kicks you square in the plums.pic.twitter.com/6Sh9VtvYId

Culkin holds the record for the shortest debut in Premier League history, replacing Van der Gouw in stoppage time at Highbury in 1999. It was his only league appearance, which amounted to one free-kick.

He achieved little of note in the rest of his career but become the first player to play for both Manchester United and FC United of Manchester when he joined the non-league outfit in 2014.

Rachubka made one league appearance as a teenager, being called into action against Leicester when Fabien Barthez was injured in the warm-up. Kept a clean sheet.

He went on to become a Football League stalwart and infamous figure at Leeds United after a horror show of a performance against Blackpool in 2011, which saw him subbed off at half-time after making three errors that led to goals, plus one of his team-mates being sent off.

The Barcelona legend made just two league appearances after United helped to rehabilitate him following an anterior cruciate ligament injury that brought a sad end to his time at the Catalan club.

Released by the club in 2016, his last season in football ended in relegation with Middlesbrough.

The Portuguese is currently on his sixth loan spell away from the Red Devils following the return of Dean Henderson.

Pereira was given a run-out by Jose Mourinho in an end-of-season dead rubber at home against Crystal Palace in May 2017, which remains his only Premier League appearance. He kept a clean sheet in the 2-0 win.

Sir Alex Ferguson occasionally called on the academy product for cup games, but Amos made just one appearance in the league, keeping a clean sheet in a 2-0 win over Stoke in 2012.

He’s currently on the books of Wigan Athletic after a career spent in England’s lower divisions.

The Spanish international made one league appearance when he came on for an injured Fabien Barthez against Blackburn in 2003. His first action was to give away a penalty, which he then saved as David Dunn struck to his left. Show off.

A loyal servant for six years as a youngster, Pilkington featured in the FA Youth Cup triumph of 1992 alongside some more illustrious names.

He was United’s third-choice goalkeeper in the Peter Schmeichel era and made just six league appearances between 1992 and 1998.

Pilkington later made over 300 combined appearances for Mansfield Town and Notts County.

Goram was signed as an emergency measure in 2001 when Barthez and Van der Gouw were out injured. Then 36 years old, he’d already made over 500 appearances for Oldham, Hibernian and Rangers.

He started against Coventry and Southampton as United closed in on the 2001 league title, conceding two goals in each game.

The former Scotland international sadly passed away in July at the age of 58.

A loyal club servant, most of his 50 appearances for the club came before the Premier League era as United struggled to reassert their dominance.

He made 10 appearances in the 1994-95 season when Schmeichel was injured, the only title in the first five years of the Premier League that United failed to win.

After impressing on loan at Sheffield United, Henderson decided to return to United and challenge David de Gea for the No.1 jersey in 2020-21.

The England international briefly managed to usurp De Gea during the latter half of the campaign, but dropped back down the pecking order behind the Spaniard in 2021-22.

With the World Cup on the horizon, Henderson secured a loan move to Nottingham Forest where he’s already saved penalties from England team-mates Harry Kane and Declan Rice.

Lindegaard was considered a potential future No.1 when he was bought in 2010 as United looked to a future without the ageing Edwin van der Sar.

While there were some positive signs, it became clear that he was not capable of being a successor and would have to settle for a role as back-up. He made 19 league appearances in five seasons at the club, 10 of which came in the title-winning campaign of 2012-13.

After stints on the bench at Sampdoria and Monaco, Romero joined United in 2015 and spent six years at the club as a squad player.

He made just seven Premier League appearances for the Red Devils but featured throughout the Europa League winning campaign of 2016-17.

Manchester United first signed the Australian at the end of the 1980s but let him go as Schmeichel was brought in.

Bosnich spent seven years at Aston Villa, establishing himself as a steady pair of hands, and was brought back to replace Schmeichel in 1999.

He won the title as the No.1 in 1999-00 but fell down to third place in the pecking order when Fabien Barthez was brought in, failing to make an appearance as United retained their crown the following season. Ferguson later called him “a terrible professional”.

Making 26 appearances in six years at the club, Kuszczak’s time at Old Trafford coincided with great success as he deputised for Edwin van der Sar.

The Pole clearly wasn’t good enough to be first choice, however, and United often suffered from a lack of understanding between him and the back four, notably as he dawdled to allow Jermaine Beckford to score past him in Leeds United’s FA Cup win in 2010.

He was trusted between the posts for their League Cup win that season, though.

Signed in 2005 but loaned out to Watford for two years, Foster was eventually given some limited opportunities by United after helping the Hornets to promotion in 2006 and looking solid in the Premier League the following year.

Foster established himself as a steady Premier League presence elsewhere but made just 12 league appearances in three years at Old Trafford. He did play a role in the 2009 League Cup win, though.

The Northern Ireland international will always be remembered for his blunder against Tottenham when he flapped at Pedro Mendes’ cross and allowed the ball to cross over the line.

Fortunately the referee let him off, but had it been correctly allowed it would have gone down in history, filed next to Taibi’s howler.

Overall, though, he had a good record. Lapses aside, he kept a clean sheet in half of his 46 league appearances.

And Roy Carroll better send you a fucking decent card.pic.twitter.com/gRtxpLeh4X

The American showed how reliable and comfortable he was with Premier League football as he made over 350 league appearances spanning a decade at Everton.

At United, his courage and personality had some considering him Peter Schmeichel’s true successor, but it wasn’t to be. And his time in Manchester coincided with a fallow period for the club – they fell 15 points behind Arsenal’s Invincibles in his only full season and then fell short of Jose Mourinho’s Chelsea.

Arriving in 1996 from Vitesse Arnheim, the 6’3” Dutchman has a case of being Manchester United’s best back-up of the Premier League era, proving reliable whenever Schmeichel was sidelined.

He eventually got more opportunities after the Dane left in 1999, competing with Bosnich for the starting position. He made 14 appearances in the 1999-2000 season and 10 in 2000-01 as the club won back-to-back league titles.

The World Cup winner with France was seen as the man to fill Schmeichel’s shoes but never fully convinced.

He’s remembered for his erratic behaviour and individual errors as much as anything else, but he was still a very good keeper and certainly enjoyed success at Old Trafford. Two league titles in three full years as No.1 is a decent enough return.

In terms of individual brilliance, De Gea is (or was, for a time) arguably the best, but he’s a victim of circumstance which means he can’t rank any higher on this list.

The Spaniard put a rocky start behind him to excel in the 2013 title win, Alex Ferguson’s last. And he has since completed a set of domestic trophies with an FA Cup under Louis van Gaal and League Cup under Jose Mourinho.

But United are too big a club to be satisfied with just the smaller trophies. The fact remains in the eight seasons since Ferguson retired, they haven’t challenged for a Premier League title and made just two Champions League quarter-finals.

Player of the year four times at Old Trafford, it could have been even worse without him.

A career bookended with wonderful highs after he established himself as a sweeper for Louis Van Gaal’s all-conquering Ajax in the early 90s.

At 42.17%, he actually has the best games to clean sheets ratio of any Manchester United goalkeeper to make over 50 Premier League appearances, and third overall behind Petr Cech and Pepe Reina.

Considering that ratio includes four mid-table seasons at Fulham, it underlines how imperious United were at the back in his years there.

A key part of arguably the club’s best ever Premier League defensive unit, Van der Sar was as lucky to play behind peak Rio Ferdinand and Nemanja Vidic as they were to play ahead of him.

They won four league titles and reached three Champions League finals in his time at the club, winning the first thanks to Van der Sar’s penalty save from Nicolas Anelka.

Sadly he couldn’t bow out like Schmeichel with another one, as they were outclassed by Pep Guardiola’s Barcelona for a second time in 2011.

Alongside the captaincy of Roy Keane, the genius of Eric Cantona and the once in a generation ‘Class Of 92’, Schmeichel was one of the defining names that reestablished Manchester United as a genuine superclub.

After 26 years without a league title, Schmeichel was a key figure under Alex Ferguson as they ended that wait in 1993 and established their status as the biggest and most successful club of the Premier League era, setting the template for everything else that followed.

He won five league titles in eight years at the club and bowed out perfectly with his last appearance at the Camp Nou, lifting the Champions League trophy to complete their historic treble.

The Dane’s aggressive, front-foot style was perfect just as the backpass rule was introduced at the advent of the Premier League. 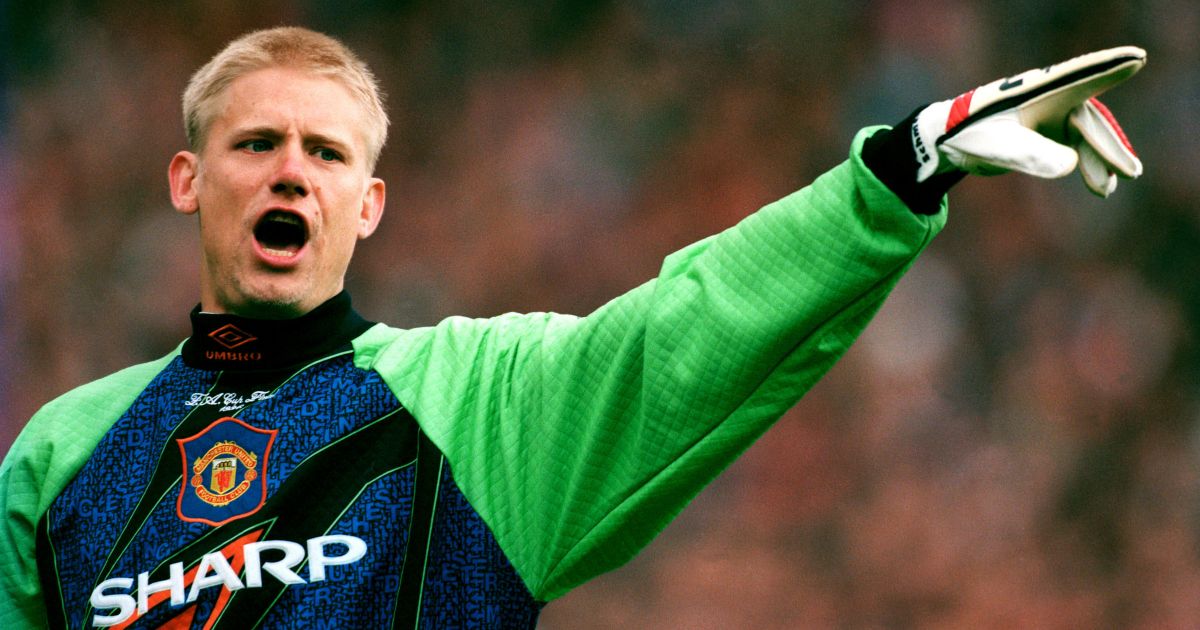