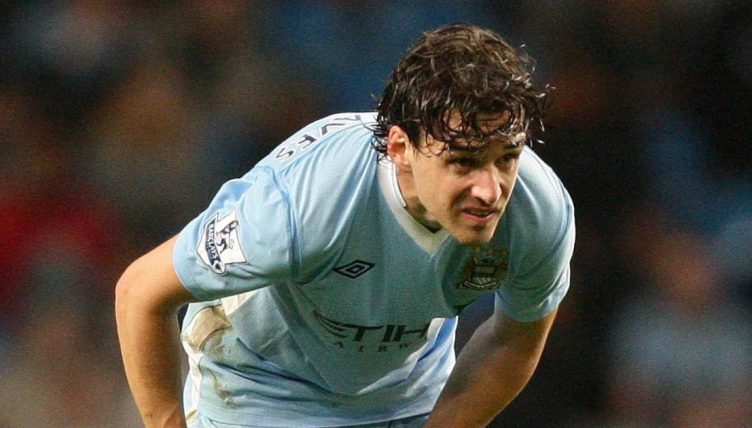 Manchester City have spent a few years outside the Premier League in the last quarter-century so you might expect them to have fewer weird signings than most teams. You’d expect wrong.

If anything, it was a struggle to cut this list down to a mere 26, but we’ve just about managed it.

As always, we’ve got a countdown from the least to most weird. It only includes players signed when City were in the Premier League, so there’s no room for the Christian Negouais of this world.

Manchester City have brought in a fair few English players who have left you scratching your head, but in most cases it felt like there was at least some sort of plan.

Attempting to build on a title victory by signing a 23-year-old outscored in Swansea colours by Danny Graham (and even then, four of his eight goals were penalties) was one to leave you wondering “let’s see what Roberto Mancini is trying to do here” before quickly realising the answer is “he doesn’t know”.

Signed for City after his Chelsea loan spell, at which point he was already quite old.

Speaking of ‘quite old’, why not lament about your own slow march towards death when you realise Weah’s son Timothy, now a US international, was in nappies when his old man was playing in Manchester.

Watterreus was arguably at the pinnacle of his career in 2004, having travelled to Euro 2004 with the Netherlands, so credit to him for showing it’s not just Abu Dhabi-era Manchester City who can look at momentum, tell its holder “you won’t be needing this” and saying goodbye before giving them a single Premier League minute.

Waterreus was brought in as back-up to David James after original back-up Geert de Vlieger (a man unlucky to miss out on this list), signed just weeks earlier, did his Achilles.

He played two games for City, both in the League Cup, and was back in Champions League action the following year.

There have been a fair few back-up keepers to pass through, so what makes Wright different to, say, Stuart Taylor?

Well, he was already 34 when he signed – having left Preston North End after just a week only a month earlier due to homesickness – and then stuck around for a whole four years.

The Belgian was signed on loan by Kevin Keegan, six years before his first Champions League final and nine before he won the competition for the first time.

Manchester City have had a fair few record-breakers in their time in the Premier League. First team to win the title on goal difference, first team relegated after a three-way tie for points, first Georgian in the competition, and first player to be arrested as part of the German match-fixing scandal.

Guess which one applies to Steffen Karl?

Say what you like about Frank Lampard’s sneaky detour to Manchester City between his Chelsea and NYCFC stints, it was definitely extremely funny. 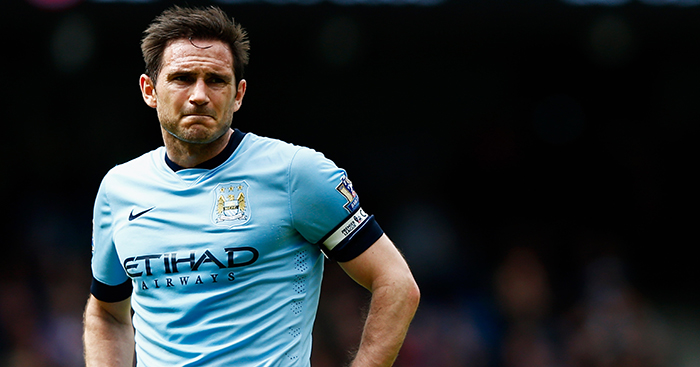 READ: Frank Lampard at Man City: A pleasing purple patch from out of the blue

One day before Manchester City’s takeover money rolled in and instantly went towards record signing Robinho, they signed another Brazilian. Glauber did not quite have the same impact.

The former Nurnberg man can be used to draw a line between City old and new, but most importantly he was subject of a ‘Top Facts About Glauber Berti’ forum thread which grew and grew each time he was named as an unused sub.

He loved the role of cult hero, too.

“The fans had been calling for the manager to bring me on,” he told The Athletic in 2020. “Not just in that game, but for the five or six weeks before, including during the derby against Manchester United at Old Trafford. They would sing, ‘Berti, Berti, Berti!’ It was a funny thing. It was a pleasure for me to be able to represent them, even on the bench.

“But the Bolton game… what a marvellous experience. Every time I touched the ball, the fans went into raptures. They were delirious. I couldn’t believe the love they showed me. I had never seen anything like that before in football. It was a brilliant moment. It felt like compensation. I thought, ‘Wow, this was worth the wait.’”

Glauber Berti 2008/09 Premier League match shirt. Berti managed to be named on City’s bench 20 consecutive times in his solitary season at the club before being given his 10 minutes of fame during the last game of the season at home to Bolton. pic.twitter.com/4WS0dPbPKL

Not every entry on this list is weird for the same reason, and in Benjani’s case the most bizarre element concerns the manner in which he arrived at the club. Or, to be precise, almost didn’t arrive at all.

The Zimbabwean striker almost ended up missing out on a move from Portsmouth after falling asleep at the airport. Twice.

Another where the manner of the transfer is the weird part. Hamann was on his way to Bolton before deciding he’d much rather go to a club not managed by Sam Allardyce – City got him instead, paying a fee to Bolton to make up for the German reneging on an apparent Bosman agreement, but was all as it seemed?

“We got £400,000 from Manchester City for a player we never actually signed – and that’s the truth,” Bolton’s then-chairman Phil Gartside would later claim, only for a Premier League investigation to find that the “that’s the truth” part of the sentence might have been, well, not the truth.

Still, nice to see a player play zero games for a club before joining City.

Maybe City were still spooked by the Hamann episode when they moved for De Jong, refusing to wait until the summer in case he changed his mind and jumped ship for Bolton.

That might at least explain why City forked out £16million for a player they could have got on a free just a few months later.

Still, who was laughing when that early outlay helped lift City from *checks notes* 11th up to 10th at the season’s end? Probably De Jong’s agent, if we’re being honest.

A: Yeah, the Newcastle defender.

A:Yeah, we had no idea either.

A: Obviously not, and we’re not sure if he even entered the country

A: Couldn’t tell you

David Seaman probably would have retired if Manchester City hadn’t offered him a contract in 2003. How do we know this? He did retire. Six months into the deal. When he was 40 years old.

Seaman came in after Schmeichel did retire, with the Dane – born two months after the ex-England keeper – arriving at the perfect time to ensure his teenage son Kasper could join the club’s academy.

This one worked out much better than it had any right to, especially given his past at Manchester United.

G Neville on refusing to acknowledge Schmeichel: “He left United at the age of whatever he was, 35, he said he was retiring, basically to go abroad. At the time when he came back, he played for City. You can't play for City.” [Will He Score Podcast] pic.twitter.com/bPLy7IOcJe

Another to cross the United-City divide, Yasser is often mistakenly credited as the first Qatari to play in the Premier League. Mistakenly, because he never actually stepped on the pitch outside of cup games, following that well-trodden path of United>AEL Limassol>Al-Sadd>City.

Yasser would later express his regret at leaving the club, to which we say “why?’.

Guidetti came through City’s youth ranks after joining as a 16-year-old, and wouldn’t even be on this list were it not for the bizarre snafu which affected him three years later.

Guidetti was out of contract in 2011, and signed a pre-agreement with Twente. At least Twente thought he did, as did a large chunk of the media.

However, City didn’t seem to believe that was the case when they kept the striker on their pre-season tour. And offered him a new contract. And loaned him to Feyenoord, who were distinctly not Twente. And when he scored a hat-trick as Feyenoord beat Twente 3-2 in the Eredivisie.

So nearly the man that denied United the Europa League in 2017, and consequently Mourinho his “treble”.

Well would you look at that, it’s another ex-Man Utd player. Now we’re not saying United have had more luck with players going the other way – the name Tony Coton springs to mind – but at least they had properly functioning legs at the time.

Hargreaves was a great player once upon a time, but there are still big question marks over signing someone with five appearances in three years when you could get literally anyone else.

When City were owned by former Thai Prime Minister Thaksin Shinawatra and managed by Sven-Göran Eriksson, they added three unknown Thai youngsters to their reserve squad at the same time. We’re sure this was fine. 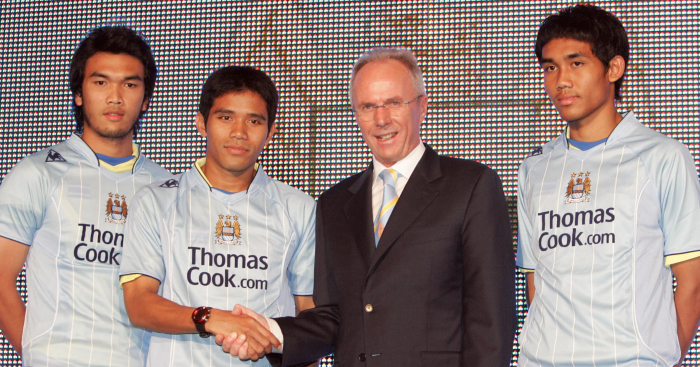 READ: What happened to the three Thai players Shinawatra signed for Man City?

John Burridge was very old when he signed for Newcastle United in 1994, but he wasn’t done yet. He became the oldest ever Premier League player when he turned out for City at the age of 43.

To give you an idea of just how old he is, the goalkeeper made his professional debut before Pep Guardiola was born. And he played Premier League football, before carrying on for another three full years.

Anthony Caceres is 26 years old. Luke Brattan is 28. Neither has a senior cap for Australia, the country for which both are eligible. Both players are on Manchester City’s books, and if you haven’t heard of them it’s because neither has played a minute for the club.

Far be it for us to say City signed the duo to bypass the A-League’s ban on inter-club transfer fees and allow their sister club Melbourne City to add to their squad. Especially when Sydney FC chief executive Tony Pignata has already said as much about Caceres.

Brattan actually arrived on a free – at which point Melbourne ought to have been able to sign him directly instead of loaning him – so we’re as clueless as you on that one.

It turns out nepotism doesn’t always work as well as in the Schmeichel situation. Roberto Mancini pre-empted Labour MP Kate Osamor by handing a lucrative contract to his son, despite young Andrea not being all that good.

This ultimately left the manager in the uncomfortable situation of needing to tell his own flesh and blood to move on when his contract expired in 2012.

Considering how much City struggled in their title defence, we’re starting to wonder whether Mancini Jr was a lucky charm who should have stuck around. Obviously he never played a minute for the first team.

Football’s equivalent of buying your mate’s old Nokia 3210 because you know he could use the help, 27-year-old American midfielder Diskerud joined City from their sister club in New York, from where he had spent a couple of years out on loan in Sweden.

Nothing to see here.

Rulli, fresh from playing in goal for Argentina at the 2016 Olympics, joined City for £4million. He had spent the previous season at Real Sociedad, on loan from Deportivo Maldonado, a Uruguayan second division club who were the subjects of a curious Guardian article about third-party ownership later that year.

So, did City play the goalkeeper, like West Ham did with fellow Maldonado alumnus Jonathan Calleri? Why do that when they could loan him back to Real Sociedad, and then sell him to the Spanish club in January?

The weirdest part of it all? This all happened at a time when City’s other keepers, Claudio Bravo and Willy Caballero, were hardly setting the world alight.

Rulli’s recent performance against Liverpool shows they probably knew what they were doing all along, to be fair.