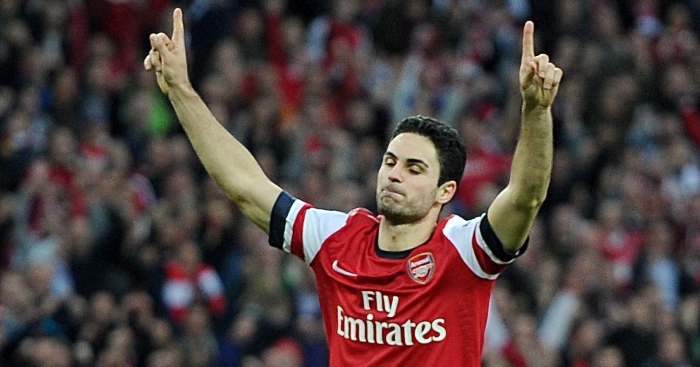 Before becoming manager, Mikel Arteta spent five years as an Arsenal player, playing over 100 games and becoming a fan favourite at the Emirates.

In that time, he managed just 16 goals for the club, and nine of them were penalties, which we’re not going to rank as that would be pretty dull for you and us both. Among the seven others, though, there were some absolute beauties. Quality over quantity right?

Some were delicate finishes and others were true thunderb*stards. This is how we rank them.

We love a good old-fashioned goalmouth scramble as much as the next person, and this one was made even better by the fact that it resulted in an 84th-minute winner.

Let’s be real, though, it’s not the best goal, is it? How he missed the initial header when effectively on the goal-line we don’t know.

In all fairness to this one, the rest of the goals on this list are good at worst.

Arteta developed quite the skill for popping up on the edge of the box and stroking the ball into the back of the net during his career, and this is a vintage example of it. Ben Foster could’ve arguably done better though.

This goal looks pretty familiar, right? His first goal for the Gunners was almost identical to his second. It places higher on the list purely because we like it when a ball hits the roof of the net.

Mikel Arteta hates Blackburn, pass it on. He’s actually scored six goals against the Lancashire club in his career, and this is one of the better ones.

Timing his run perfectly, he runs on to Laurent Koscielny’s perfect lay-off/bad touch and does well not to absolutely sky his half volley, like so many of us would, to drill the ball into the bottom corner.

Arteta always had a helluva long shot on him, as these next three goals show. We just wish he got to show it off more often.

What a hit this goal against Wigan was. It fails to make the top three, though, because we’re slightly confused as to what exactly Mike Politt is doing in his attempts to stop it going in.

Undoubtedly the Spaniard’s most memorable goal in an Arsenal shirt. Yep, before he was helping Man City win titles, he was hindering their efforts to do so.

And he did so in style too. With the scores locked at 0-0 with five minutes left, Arteta won the ball in midfield and smashed it past Joe Hart to send the Emirates wild.

The one against Man City may have been the most important and memorable, but this scorcher is the best he scored.

With his side 2-0 up in the 93rd minute and the game already won, he presumably stepped up to this long-range free-kick thinking “f*ck it, I’ll just have a go”.

Have a go he did, and the ball flew across goal into the top right corner without a single spin. Fancy teaching Granit Xhaka how to do that, Mikel?